Astronauts in Trouble: Live from the Moon written by Larry Young, illustrated by Matt Smith 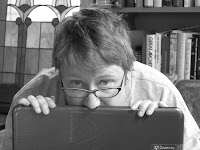 After reading both these space adventure graphic novels, my first thought was, “there are too damn many white boys in space.” I felt this way not because I particularly have some kind of diversity agenda, but because, in both black & white comic books, I had trouble keeping the male characters straight because they all looked so much alike. In the Martian Confederacy the big physical difference between Boone (the hero) and Alcalde (the villain) seemed to be the thickness of their sideburns. In Astronauts in Trouble, I had difficulty distinguishing between the main TV anchor, the villain, and the villain’s main henchman.

Despite this slight artistic handicap, I found The Martian Confederacy to be immediately accessible and engaging. Part of that might be my own predilections, however. I’m always up for a story about a thief, and our hero, Boone, is exactly that. The Martian Confederacy is the story of a corrupt, lone wolf cop, Alcalde, and his personal quest to keep an economically (and atmospherically) struggling Mars under his thumb. Our thief/antihero Boone and his band of classically misfit friends get in Alcalde’s way, and wacky hijinx ensue.

The main plot, while entertaining, wasn’t the main appeal of The Martian Confederacy for me. I ended up surprisingly invested in the various characters, particularly the female android, Lou, as well as some of the odder side characters, including a slightly-insane, grieving widow/show girl and the “duplicitous” girlfriend of Alcalde. In fact, the true marvel of The Martian Confederacy is that I even ended up caring about a talking bear and his family.

Perhaps therein lies the difference between The Martian Confederacy and Astronauts in Trouble. The only character I felt I could hang onto in Astronauts in Trouble was the hard-drinking, hard-livin’ cameraman, Heck. Astronauts in Trouble follows the adventures of a band of TV journalists who get invited along to an historic return to the moon by billionaire business mogul Ishmael Hayes. When the launch is nearly hijacked by eco-terrorists it becomes clear that there’s more going on than a simple space launch. There’s some truly excellent science in the science fiction of this graphic novel, but ultimately the characters never felt fully realized to me.

Honestly, I was nervous when I read Warren Ellis’ intro to Astronauts in Trouble because I’m not a huge Ellis fan. I mostly know him from Freak Angels, much of which I’ve found compelling yet… a bit “arty.” Astronauts in Trouble might suffer from too much hype, too. Its cover blurbs ranged from Harlan Ellison (an old school science fiction writer I mostly respect) to Ed Brubaker (my current #1 favorite comic book writer), and with that and a forward from Ellis I may have come into Astronauts in Trouble expecting to be completely blown away, and thus felt disappointed when I was only mildly entertained. Perhaps, if you’re a fan of Ellis, you’ll disagree with my assessment. Certainly plenty of other big names would back you up, if you did.

thanks for the reviews. As a white male I can vouch for the fact that we all look alike.