This Week in Santa Rosa and Space

Tomorrow, Saturday 21st, is the Sonoma County Book Festival. I'm in charge of volunteers, so I'll be there all day, mostly at the info booth. In addition, I'll be reading a story that all the editors love, but none will publish. I've changed strategies and sent it to a literary journal this time, though it is speculative. Seriously, it makes people cry. They all love it. It just doesn't fit into their little boxes. You can hear seven minutes of it tomorrow at 12:30 at the Redwood Writers' Reading Circle in front of Bertolini Student Center near the Santa Rosa Junior College Quad. I'll be joined by fellow Broad Universe member Michelle Murrain and fellow Redwood Writer Robbi Bryant.

JP Aerospace has a mission that you can watch live on Sunday. Pillownauts! Pillows exploring space. Wackiest thing since ping pong balls in space. Did you know that JP Aerospace does more experiments than NASA? Yeah, I know, these days that isn't saying much. But they are in a constant state of motion. Keep an eye on them. Never heard of them? They're building airships for space exploration. No joke. I wrote about them in my article "Airships: Not Just Flying Billboards" over at Strange Horizons.  They are the real deal. Anyhow, here's the link for more information and where to watch live. 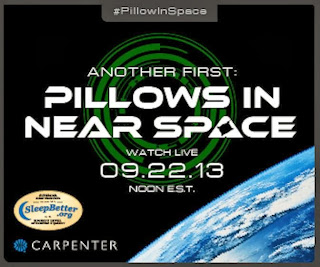 I don't think John Powell will mind me posting another picture to entice your interest. 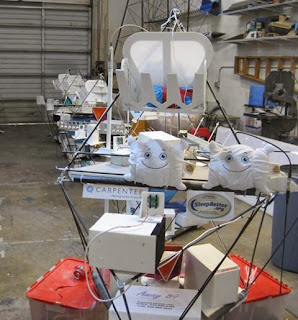 And you can read about the essay contest for selecting the pillow parents here.

Well, I did finally find, or rather hubby did, the sequel to that not-so-fantastical The Last Policeman series. But, meanwhile, I'm struggling to find any reading time at all with my September events in full swing. If you're in the Santa Rosa, CA area on September 21st with a few hours to spare, I desperately need some room monitors for the Sonoma County Book Festival. And if you're going to the Kendall Jackson Heirloom Tomato Festival on September 28th, I just might be taking your ticket.

I'm reading a pretty decent book by Doug Sharp, Channel Zilch, published by Panverse. Really want to throw my Pandigital e-reader across the room, though. It shouldn't take three to five swipes to finally get the page to turn. Very frustrating! And I actually requested a collection of shorts by a newbie that's self-published. Then, of course, there's Gardner Dozois' tome, The Year's Best Science Fiction. I'm feeling a little like Burgess Meredith's character in that classic Twilight Zone episode. Uninterupted reading time would be lovely. Then I might even get to writing as well.

Speaking of Gardner, if you're not FB friends with him, you're missing out. He writes hysterical little bits on the celebrations of the day. My favorite of the ones I've read is the "leave a zucchini on the doorstep and run" day. I just tried to find it, so I could quote from it, but couldn't. Anyway, very entertaining stuff.

I promised a piece to a friend for a domestic violence awareness thing and signed up to do an exquisite corpse and a voice part for a podnovel. I really need to learn my limitations. But there are so many delicious opportunities out there. If only they all paid. ;)

Want to join me for the Exquisite Corpse? It's in San Francisco on October 2. We write a play together and then see it performed by improv actors on the spot. How cool is that? Leave a comment here and I'll tell you more.

Now, since I mentioned it, I just have to slip it in here (and not for the first time).

If you're a Twilight Zone fan, you'll love my short fiction. They are very much like Twilight Zone episodes. Some of it's available online still. Check out the list on my website at www.annwilkes.com.

In SF News...
Apex magazine is losing its Editor-in-Chief and Managing Editor as Lynne M. Thomas and Michael Damian Thomas (respectively) step down. Lynn, who took the reins from Catherynne M. Valente two years ago, told Locus that she needed a break and looked forward to taking up other projects after that.

So, how many Harry Potter fans out there have read her trilogy apparently written for charity entitled Fantastic Beasts and Where to Find Them? Any good? Well, if so, you'll be glad to hear J.K. Rowling will be writing screenplays for them for Warner Bros. Check out the article at Tor.com.