Just got word on the weekend that I'll be doing a reading/signing at SpoCon in Spokane, WA the first weekend of August. Last time I was in Spokane was for Expo '74 when I was a pre-teen.

I'm also working on lining up a school tour.

I've been tossing around ideas for a sequel to Awesome Lavratt. No promises yet, but I'm working on it. I'm thinking Horace should make a comeback. And then there's still the Lavratt...

Just a reminder to my local fans: I have a signing in Rohnert Park at The Comic Book Box in University Square this Saturday from 1 to 4 PM.

I noticed that Nanobison has movement. They now have a table of contents for their last issue with a promise that it will be up before the end of this month. My story, "Jolaneering" will be there.

The blinking light from the smoke alarm gave me an idea for a new story...

Speaking of smoke, the air here is filled with it. Many wild fires in the area. Speaking of fires...the second house fire on our block within a matter of a couple months happened last Thursday. Each was several houses down, but in opposite directions. What are the odds? One was started by kids playing with matches and gas. The other looks like a teenage mischief thing or at the very least a tossed cigarette. The bushes next to the house were ablaze when we were coming back from a walk. Good thing I'm not superstitious... (threes)
Posted by Ann Wilkes at 12:54 PM 1 comment:

Get thee hence, people with suggestions for interesting workshops and topics for a writer's conference...My fellow RWC (Redwood Writers Club)writer, Linda McCabe, is looking for ideas for a one day RWC conference. There are already 15 responses. Add yours now.

My bull riding story is really taking shape. Quite a departure from my usual alien stories. It's for a contest that benefits the Resistol Relief Fund for bull riders. It's doubling as a way to flesh out a character, who happens to be a bull rider, in my mainstream novel. Did I mention how much I love bull riding? Best 8 seconds in sports!

I have three more signings and/or appearances this month and two more the following month. I'm looking forward to all of them. Meantime, I'm job hunting... And, of course, all the good writing jobs are taken. I'll wind up in an office again. I'm looking into temping. That wouldn't be so bad. I like to go in and organize an office and move on. My husband calls it my Mary Poppins routine. :)

Now would be a good time to scale back on the volunteer positions. How do I always manage to do this to myself? It's a simple little two letter word. One of the first I ever learned. Why can't I use it more? NO!
Posted by Ann Wilkes at 10:10 PM 1 comment:

Camille Picott's book launch is tomorrow in Healdsburg, CA. You can find more info on her blog. Meantime, here's a picture of the two of us at her first reading. Raggedy Chan is a great book. Think Chinese fairy tales, racial tension, Princess Bride. 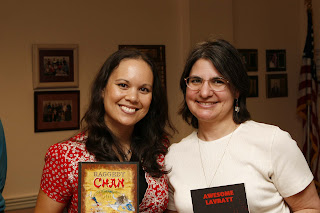 "The Heist" up at EDF

"The Heist" is the story that tried to be funny AND suspenseful. I had to pick one or the other. I chose suspenseful and rewrote it. A couple of rejections confirmed what my gut was already telling me: that I chose wrong. I rewrote it as funny flash and it was published by the first mag to which I sent it. Find it now at Every Day Fiction.

A fantasy writing friend of mine over at MySpace gave me a lead on a little item you may have noticed in my right-hand side bar. It's Blogrush. It helps generate more traffic to your blog. Like Google's Adsense, it looks for similar products. It's like swapping links without doing a thing. If you sign up, be sure to use the link below because I get even more traffic for referrals. It's easy, free, and so far, I've seen no downside.

I updated my appearance schedule. They're all Sonoma County events in June and July. Unless I get a windfall and can afford to go to another Con. Going as a guest pays the entrance, not the travel and lodging. And hubby is still on workman's comp. I may even have to go back to the work force. Ugh!

I've also added links to all the other places that I can be found on the web to my bio page on my website. And I've added a sell sheet for Awesome Lavratt to the Lavratt page.
Posted by Ann Wilkes at 8:42 PM No comments:

I'm currently reading a book by a fellow Broad (Broad Universe), Pauline Baird Jones, entitled The Key. It's a great book so far (60 pages in). Love her sense of humor. While at Bay Con, as I mentioned in my previous post, I was fortunate enough to hear Kage Baker read from Or Else My Lady Keeps the Key. Yesterday, I heard of another book with "Key" in the title. Then I started seeing them everywhere. So I did a quick, less than exhaustive search.

Duma Key by Stephen King
Lock and Key by Sarah Dessen
Key to Redemption by Talia Gryphon
Key to Conspiracy by Talia Gryphon
The Gaudi Key by Andreu Carranza and Martin Esteban
The Stone Key by Isobelle Carmody
The Rosetta Key by William Dietrich
Cathy's Key by Sean Stewart and Jordan Weisman
Bone Key by Keith R A DeCandido
The Blackstone Key by Rose Melikan
The Golden Key by Dan Lee
Or Else my Lady Keeps the Key by Kage Baker
The Ruby Key by Holly Lisle
The Skull Cage Key by Michael Marriott
The Key to Rondo by Emily Rodda
The Other Key by Dave Hartman
The Three Keys of the Three Thrones... and the Storm by Anthony Scalici
In the Key of Death by Robert S Levinson

The Key by Pauline Baird Jones
The Dagger-Key: And The Lost Treasures of Kebadon by Daniel L. Ferguson
The First Key of Kalijor by Paul Lell
George's Secret Key to the Universe by Stephen Hawking and Lucy Hawking

Okay, so if you have a great novel you're working on now, just don't use the word "key" in the title. That ship has sailed. And please, no smirking. I've also noticed the word "darkening" a lot all of a sudden within the text of recent books.

Now on to my good news. I have a date for the appearance of my flash SF story, "The Heist", at Every Day Fiction. Mark your calendars for June 9th! That's next Monday as I write this.

I'm reading a Kage Baker Company novel, The Children of the Company right now, at the same time as I'm reading The Key. I finished the previous, The Life of the World to Come, before BayCon. I'm hooked. I just read the story, "Let the Word Take Me", by Juliette Wade, whom I met at BayCon and have since corresponded with. It's in the July/August issue of Analog. I highly recommend it. She delivers a thought-provoking piece on bridging the (alien) culture gap to break the language barrier. That's a gross over-simplification. Just read it. Trust me. :)
Posted by Ann Wilkes at 1:15 PM No comments: