Today is the last day for your flash stories about mirror balls. Micah Joel awaits your lovely, concise prose. Read the details again here. It's a blind contest and he's the judge. 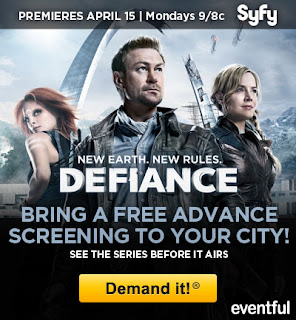 SyFy has gone all social media and is running a contest via the 'net for you to get a premiere showing of Defiance in your city before it airs on April 15th. The contest started on the 19th of March and runs to 5pm PT, April 4th. Three US cities will win. The advanced screenings will include giveaways and prizes. Vote for your town now.

Defiance takes place in a frontier town in a transformed, near-future Earth where humans and aliens must unite against a mutual threat. Sounds intriguing. We need more shows where humans co-exist with aliens. It might teach us a thing or two about getting along with our neighbors.

Finally, word is spreading about my love of Indie films. This is really a love story with a sci-fi element. I liked the idea, though. You might, too. Maybe even enough to help them fund production. The perks for contributing are especially great if you live in Dublin...

Posted by Ann Wilkes at 8:00 AM No comments:

How are those flash stories shaping up? Tuesday, the 26th is the last day to get your entries in. Then the judging will be another two weeks. I'm anxious to see all of your great stories. I'm also very thankful that I won't have to judge them. Micah Joel will get them sans author names to give all of you an equal shot with no bias. I've long since stopped judging these things as I know too many of the people submitting entries. Fair is fair. See the last post for all the particulars and my story to set the mood.

I started another story on Saturday that will break the bonds of the flash limit. Though I didn't start out with that in mind, it will be the perfect prequel to one of my previous elephant stories. I'm back on my elephant kick.

A spaceship lives on after its crew have died. It has evolved and is lonely and craves human interaction. In an attempt to fill that need, it builds a robot to interact with, which, of course, is also "it", an extension of itself. The addition of the human brain that the ship has managed to preserve is a bit hokey, but they're not going for scientific authenticity here. It's a campy send-up to those flicks from the 70s and 80s that romanticized robots. For an Indie short, the special effects (a mixture of quarter-scale miniatures, retro in-camera effects, and computer animation) are, well, most effective. The music is decent, too. You can rent it for $1.99 or buy it for $2.99 and see what you think. I love it when I can promote a good Indie film and this one was superb. There is also a "making of" film available.

Dr. Calvin, the ship's dying captain (in a memory of the robot's), is played by Margot Kidder (Superman 1978). A human could not survive such solitude. The real question is, can a sentient robot fare any better? A robot can't even sleep part of the time. It is a rather tragic flick, but very well done. The cinematic shots and music make you care about the robot's heartache - believe that a robot can suffer from such a thing.


HENRi from Eli Sasich on Vimeo.

Flash Contest and Ann's Flash to Kick It Off