There is so much news this week in the world of science fiction, I had to take time out from my various other projects and do a blog post.

2) For folks in Australia, a new Web TV show is in development called Tomekeeper Preludes. Visit their Facebook Page to learn more. Here's a visual. 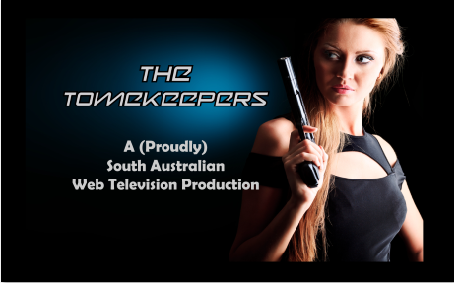 3) Stephen King's The Shining - a play. This is a bit of a tease since it's only in Omaha and already sold out, but maybe it will give other folks some good ideas to do something similar. And if you have friends in Omaha, they're still collecting donations for the theatre through the 22nd of March.

4) This isn't sf or fantasy, but it doesn't get a separate post and it benefits kids. And it's my blog, damn it. Radio Silence, the magazine of literature and rock and roll, is launching a digital, monthly magazine. It's available as a free app for iPhones and iPads, and desktops from web browsers. Editor-in-chief, Dan Stone, says that most of the pieces will include media features like podcasts, films and songs. The March issue has a memoir by Lucinda Williams.

5) Orbit is an indie film in development based on Edgar Allan Poe's "The Tell-Tale Heart." The press release is below and you can also visit the crowd-funding page to help it along.

Inspired by sci-fi classics from the 1960s and 1970s, ORBIT depicts one man’s madness set against the isolated backdrop of deep space. Co-directing and producing the film, Thiel will serve as Director of Photography while Camp will lead editing efforts. Special attention will be paid to practical effects and elaborate set design. Despite its futuristic environment, the “tense, creepy, visually stunning sci-fi thriller” will draw directly from Poe’s original piece.

“When writing the script, I realized that I didn't need to alter Poe’s story for a single moment to justify the space setting,” Camp says. “The space station will even amplify the narrator’s motivation for madness since it’s isolated in the depths of space, orbiting around a mysterious planet.”

“I think the great thing about [Edgar Allan] Poe’s work is that it’s timeless,” Thiel says. “He may have been writing in the 1800s, but the themes and characters and the world he created are really applicable in any time period.”

The crowdfunding campaign, which launched on February 19th on Indiegogo, aims to raise $20,000 to directly support production costs. Reward incentives range from digital downloads and behind-the-scenes access (Black Cat level) to a $5,000 package that includes a walk-on role in the film, premiere tickets and memorabilia, including a framed storyboard (That Hideous Heart level).

Production of the film will take place in Los Angeles and is scheduled to begin this spring.

6) Wired posted a video that shows some behind-the-scenes of the special effects of the latest reboot of RoboCop.

8) In Canada, March is National Read an E-book Month. What are you reading?

The Dune movie that wasn't . . . but launched careers 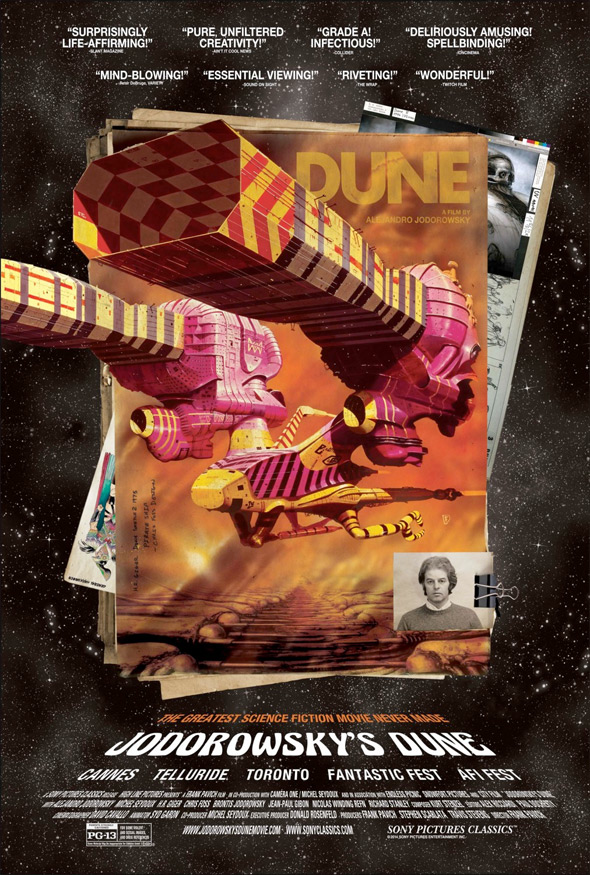 Most fans of science fiction are familiar with Frank Herbert's Dune, in at least one of its forms. First serialized in Analog magazine from 1963 to 1965, the novel won both the Hugo and Nebula awards in 1966 and has garnered a reputation as one of the greatest sci-fi novels of all time. Several sequels in the Dune universe followed, both by Frank Herbert and his son, Brian Herbert, and Kevin J. Anderson.

The original film adaptation by David Lynch was released in 1984, to mixed reviews. More recently, the Sci Fi Channel aired two miniseries encompassing both Dune and some of the sequel material. There are currently attempts to produce an updated cinematic feature under way.

What I was not aware of as a fan of Dune, was that in the mid-1970's, Chilean-born director Alejandro Jodorowsky had attempted to create his own ambitious adaptation of the book. The project ultimately failed for financial reasons, but Frank Pavich's documentary, Jodorowsky's Dune, follows the story behind the failed undertaking and the legacy that it left behind that arguably influenced later films such as Star Wars, Alien, and Bladerunner.

Jodorowsky spent his early years studying surrealism in France, and his films became known for their visual style and spiritual themes. He has compared his films to the psychedelic experience of using LSD.

Pavich's documentary is mainly a series of interviews with those who worked on the production of the picture, including Jodorowsky, Michel Seydoux, and H.R. Giger. At the heart of the film concept, the script and a book of complete storyboards provide a tantalizing glimpse of what could have been. Through the film, a few animations based on the storyboards help to share Jodorowsky's vision.

Jodorowsky himself is the subject of many of the interviews, and was spirited in describing his work on Dune. His enthusiasm, even decades later, is remarkable, and at times, his fervent outbursts were tinged with madness:

"In that time, I say, if I need to cut my arms in order to make that picture, I will cut my arms. I was even ready to die doing that." -- Alejandro Jodorowsky

He relates several tales about how he recruited the talent for the music and cast, which would have included his own son, Brontis, David Carradine, Orson Welles, Salvador Dali, Mick Jagger, and Pink Floyd.

I was astounded by the spectacular artwork displayed in the film, particularly the full color depiction of a starship blasted open by pirates. While Jodorowsky admits that he planned to take liberties with the source material, if his vision of Dune had been completed, it certainly would have been a spectacle unlike anything at that time.

This documentary likely has little appeal to the average viewer, but for those who have a special interest in the history of science fiction film, or in the source material itself, it was an interesting movie. I was particularly intrigued by the project's influence on later films, particularly the Alien franchise, in which a structure nearly identical to the Harkonnen palace concept art appears in Prometheus.

Jodorowsky's Dune was an Official Selection at the 2013 Cannes Film Festival and is scheduled to open in New York and Los Angeles on March 7, 2014.
Posted by Ann Wilkes at 3:47 PM 2 comments: