For all those people who say LinkedIn or social networking is a waste of time: Neener, neener, neener! I found Gareth L. Powell on LinkedIn. And everyone who enjoys a good SF read or a good interview, will be glad I did. He's an emerging SF author from across the pond. He's been published in anthologies and translated (his work, not him) into seven languages. He won the Interzone Readers' Poll for best short story. His first novel will be released in 2010.

Welcome, Gareth, and thanks for playing here at SFOO. 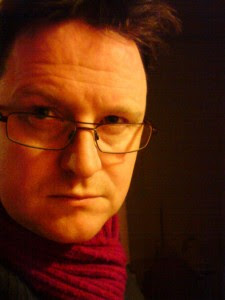 AW: What has been your biggest literary triumph?

GP: I guess the publication of The Last Reef and Other Stories has to have been the biggest triumph so far. It came out in August 2008 to good reviews, and collects together fifteen of my most successful short stories.

AW: What's your holy grail – literarily (my word, like it?) speaking?

GP: The goalposts keep shifting. When I started out, my aim was to have a story published in Interzone – which is kind of a "holy grail" for most budding British SF writers – but once I'd achieved that, I started thinking about a collection. Now, I'm writing novels and hoping to get them published. After that, who knows? A BSFA award maybe…?

AW: Where do you get your inspiration?

GP: I get lots of story ideas. They occur to me while I'm daydreaming in the shower or sitting on the bus. But few of them ever make it onto the page. They just don't fire my imagination. The stories I actually write tend to start life as little more than a character sketch and a vague notion of setting, and the rest falls into place as I write. To take a story from my collection as an example, when I started writing "Flotsam" all I had was the name of the main character (Toby Milan) and an image of a container ship converted to house climate refugees. The remainder of the story flowed from there.

I'm not one of those writers who meticulously plan their stories in advance – although having said that, I did produce a three thousand word outline for the novel I'm working on at the moment, but that's very much the exception to the rule.

AW: Which author changed how you thought about science fiction?

GP: I grew up reading Larry Niven and Arthur C. Clarke and had this image of the future as a place of utopian technocratic expansion. Sure, there were aliens out there and the human race might get into trouble once in a while, but on the whole we were going to build spaceships, cure disease and death, and expand unstoppably into the galaxy.

I tried to write a few stories in that vein but struggled badly. I just couldn't find anything original to say. It wasn't until I read William Gibson's first collection Burning Chrome that I realized there was another way to do it. That book blew my socks off. It took the pristine future I'd been used to and rubbed its nose in the dirt. It took everything down to the level of the street. The characters were flawed, selfish, and greedy, and out for themselves. But more than that, it was extremely well written, in a pared-down prose that hooked me straight away.

From there, I went on to discover Bruce Sterling and the rest of the Cyberpunk movement, as well as Raymond Chandler (to whom Gibson's style owes a tip o' the hat), Ernest Hemingway, and Elmore Leonard – writers who all had the ability to describe characters and scenes using only a few well-observed and essential details.

AW: Many of your stories are post-apocalyptic? What makes that setting attractive to you as a writer?

GP: I grew up at a time when the Cold War seemed likely to turn hot at any moment. We were shown "Protect and Survive" films at school, and I remember that the local doctor's surgery had leaflets about nuclear fallout and guidelines for the disposal of relatives who'd succumbed to radiation sickness. As a teenager, it was a scary time. It was hard enough dealing with all the emotional stuff teenagers have to go through normally, without the added worry that the world was about to end. I guess a lot of that fear worked its way into my psyche. Part of me still expects society to fall apart at any given moment, and so those stories are to a certain extent an exploration and exorcism of that fear – a way of confronting my personal demons.

AW: Do you attend science fiction or writers conventions?

GP: For the last three years, I've attended Eastercon, the annual British National Science Fiction Convention. The first year I went, it was held in Chester, then Heathrow, then Bradford, and next year, I think it's going to be in Heathrow again.

Events such as Eastercon are great because speaking as a writer, they allow you to meet your peers and to socialize and share a drink with editors, agents and other writers. I've made many friends through my attendance at those three cons, and also strengthened friendships that had previously only existed online.

And this year, for the first time, somebody came up to me and asked me to autograph a copy of a publication that had one of my stories in it, which was nice.

AW: Do you belong to writers' groups or have first readers?

GP: I belong to an informal group of local science fiction writers and fans (including Colin Harvey who recently included one of my short stories in the Future Bristol anthology that he edited for Swimming Kangaroo Books). We meet up once a month for a beer in a pub just off the city centre.

When it comes to first drafts, my wife reads all my stories and usually comes back with interesting and practical suggestions for improving them. She isn't a science fiction fan, so she had no patience with the usual tropes of the genre. She makes me explain the technology in my stories and won't let me get away with lazy reliance on science fiction shorthand.

AW: What do you do when you're stuck?

GP: If I'm not working on a story, I get crabby and restless. If I'm working on one and I've got stuck and don't know how to proceed, I drink beer and swear at the computer screen, and then I do something else for a while. I put the story away and try to focus on another project in the hope that distancing myself from it will give my subconscious the opportunity to mull it over and find a way forward.

This is a surprisingly effective method for dealing with writer's block, although the subconscious mind works to its own timescales and while the answer to your problem may pop up within twenty-four hours, it may equally take two or three years to work itself out – which is why you must never throw anything away, ever. Even the crappiest scrap of failed draft might suddenly have new light shed upon it when you suddenly find it a use months or years down the track.

AW: Tell me about your current project.

GP: I'm currently working on the first in what I hope will be a series of novels. I can't say too much about them at the moment, but the first involves a group of present-day characters thrust into a far-future space opera setting.

AW: What review surprised you the most?

GP: I try never to comment on reviews of my work. Luckily, I've been fortunate that the majority of the reviews I've seen so far have been positive.

AW: If you had a golden ticket to collaborate with an author of your choice (past or present, we are talking SF after all), who would it be and why?

GP: I'd love to have had the chance to work with Jack Kerouac, just to borrow some energy from that fantastic, poetic, hectic mind. Hell, I'd like to have had the chance just to sit and talk with him for an hour or so. Although our writing styles are quite different, I love the rhythms of his words and there's something about the way he describes the world that brings it so vividly to life.

I think Kerouac's a very misunderstood writer, which is one of the reasons I recently wrote a short story about him, in which I put the following words in his mouth:

"Thing is, most kids get caught up with the drugs and the kicks, and they miss the real spirit of it all, the great gone mystical lonely terror, the open spaces and the unspeakable, inescapable sadness of the American bop night."

I first read On The Road at the age of eighteen and still rate it as my number one favourite book of all time. I followed it up with Desolation Angels and Big Sur and The Dharma Bums, which led to an obsession with the Beat Movement that lasted all the way through my university days and well into my twenties, and which I still haven't completely shaken off.

To find out more about Gareth's work and even find some tips for budding writers, visit him at www.garethlpowell.com.
Posted by Ann Wilkes at 8:35 AM

As a science fiction reader/writer I've heard of Gareth Powell but haven't yet read any of his work.

As a result of reading this article that will change.

Actually I've just been published in the US myself. The link to my author page is:

Thanks David. I'll peek at your site, too.