Well, the SF movies were a bust! We rented 7 movies, 6 of them SF. A couple of them could win some utterly horrible, painfully bad cinema award. One was a Japanese, post-apocalyptic flick with this teenage girl whose whining made us climb the walls. We only got through 10 minutes of it. Then my husband started fast forwarding to see if it got any better. It just got weirder. The acting didn't improve, nor did the script. Nor did her whining. It was called Dragonhead.

I watched After in its entirety and seriously regret it. Why didn't I just turn the thing off? It wasn't so much that I needed to see what happened or that I hoped it would get better. It was more like morbid curiosity at something that bad getting to the big screen. There was absolutely no point to the thing. The whole movie transpires inside his own after life experience.

Alien Agent was another one we gave up on. A lot of fighting. Very thin on plot.

After trying to watch two in a row that were a bust, we switched to a recorded episode of House rather than brave the last one, Ghost of Mars. Being a John Carpenter flick, we figured there'd be lots of blood and horror rather than true SF.

The best movie we watched was one we'd seen many years before - long enough ago that we couldn't remember everything that was going to happen. Delicious! It's a fave. The Thirteenth Floor. If you like virtual reality stuff, it's a must!

And believe it or not we hadn't seen the Star Wars: Episode III - Revenge of the Sith. That was a winner.

The non-SF movie was Lakeview Terrace. I recommend it.

Hubby's doing better. We made the most of his Bday yesterday. It's really tough having all those dietary restrictions. Bah humbug. But it sure beats the alternative... A friend of ours died Friday night of a heart attack. That could have been my Pat.

We headed in to Blockbuster last night to rent some movies. Is it any surprise they were mostly SF? Some that I haven't seen, too. :)

I give up EVER trying to watch a SF channel movie again. The writing is abysmal. I've always said I could do better, but now I don't think I want to shoot for a SF channel movie. I'm gonna focus on the big screen where writing counts for something, the science makes sense, people act like, well...people and there isn't always an estranged spouse getting thrust together with their ex to solve an alien problem or avert or cope with a disaster. Actually, that has happened on the big screen, too, come to think of it.

I have a contest for you writers out there. It's not necessarily SF, but it's FLASH! I love flash. I just sent a flash piece off last week. For those who don't know, flash is a story of usually under 1000 words. This one calls for under 750. There are some out there that are 500. I haven't been able to do the shorter ones, but have had two under 1K word stories published over at Every Day Fiction. That's all they do.

The con that wasn't

Well, I missed Radcon. My dear hubby ended up having emergency surgery the day we were to leave. He's recovering well. It was his heart - very scary. If you ever go to the doc with chest pains make sure they do the stress test (treadmill). Everything showed normal till that. We had a nice low-cholesterol dinner on Valentines Day of Buffalo burgers, salad and purple potatoes. And pear sparkling cider. I'm learning how to cook all over again.

So, in lieu of my Radcon report, I will point you to that of their illustrious writer guest of honor, whom I will now have to interview via email instead. I am speaking of Alma Alexander, a sweet lady who I was hoping to get to know better while there. Here's her Radcon Redux.

I'm sending off that crazy smoke alarm story to a literary journal. They don't prohibit SF and they need flash. Purple-eyed, small, hairy people all harassing one poor schmuck. What's not to love?

The story which begins with a true historic WA tragedy is still lacking half a scene and thorough rewrite. I had intended to read a portion of it at the Broad Universe Rapid Fire Reading. I might have had listeners that knew of the tragic Chelan, WA bus accident of 1945.

I'm going to aim high with this one. Pro markets baby.
Posted by Ann Wilkes at 7:55 PM No comments:

I just found this picture of the "Toxic Waste" from the RadCon party at OryCon in Portland, OR.

Of course, it took my phone dying and trying to figure out how to transfer photos to bring it to you. :) 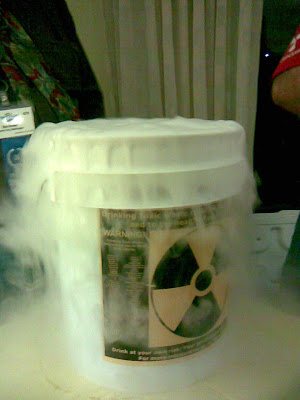 So here are the panels I have the pleasure of sitting on in just 11 days at RadCon in Pasco, WA. If you've never been to a convention, you're missing out. It's not all Star Trek and furries.

These are not in chronological order...
Drop and Give Me 10
Who's Line Is It, Anyway?
Legends of the Small Screen
End of the World

And of course, a Broad Universe Rapid Fire Reading and signing Awesome Lavratt. :)
Posted by Ann Wilkes at 9:25 PM 1 comment: