I had a blast at BayCon. I brought my buddy Judy, who loves conventions. My husband doesn't do Cons. My con journal follows. Bear in mind, I'm still sleep-deprived.

After only two hours of sleep...
Day 1: Betrayed by my eleven-minutes-slow watch, I made a late entrance to the first panel I was sitting on. I made the best of the History vs. Historical fiction panel, in spite of the fact that my histories are made up, being...well...of future humans or aliens. Walter Hunt and I exchanged cards. After discovering that Walter is a Douglas Adams fan, I gave him a copy of Awesome Lavratt.

Before heading back down stairs for a panel on “Is the Short Story Dead?”, I received an email that my story “The Heist” will be published in Every Day Fiction! ☺ I guess it’s not.

We hung out on the party floor for a while and I spoke with the BASFA (Bay Area Science Fiction Association) folks.

After six hours of sleep...
Day 2: I mentioned California Writers Club at the Sex, Lies and Publishing panel, which Tony Todaro (aka TN Todaro) was sitting on. He approached me afterward to talk about the CWC briefly and we exchanged cards. We spoke again at length the following morning in the dealer's room where I met his wife Lilly, an artist with a table and art in the gallery. I was also able to plug my SF Reviews List at that panel.

Tony introduced me to Tim Powers, who accepted a copy of my book, Awesome Lavratt, and handed it back to me with a pen for a signature! "This is so backward," I said to him. I spoke to Tim about The Anubis Gates (great book, btw!) and being on panels. I bought a copy of his book, Declare, before leaving the dealer's room. WWII espionage meets fantasy. It doesn’t get any better than that. I made sure to have him sign it on Monday.

I moderated the silly panel, My Dream Geek, and sat silently on the Evolution of Dr. Who panel. The latter ended up being the history of Dr. Who instead, and didn't get to the ones I've seen until it was time to vacate the room. The former was surprisingly well attended and very lively. See picture below. 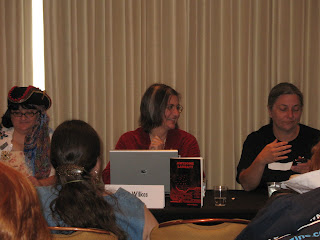 The Broad Universe Rapid Fire Reading I led that evening was, eventually, well attended. Valerie Frankel, author of Henry Potty and the Pet Rock: An Unauthorized Harry Potter Parody, and I were both reading funny spec fic. I signed books after.

Back to the party floor.

I shared a panel with Deborah J. Ross, Tony Todaro, Maya Bohnhoff, ElizaBeth Gilligan, and Juliette Wade. (see picture below) Julia sold her first story recently. To Analog! It can be done. Find it in the July/August 2008 issue. 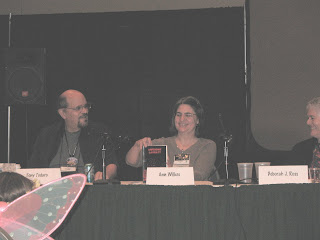 L to R= Tony Todaro, me, Deborah J. Ross (flash didn't cooperate)Everyone is excited about "firsts". I'm introducing them to my "first". 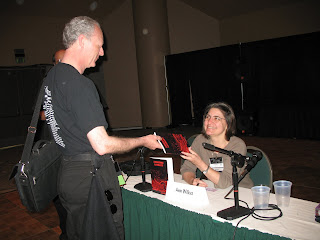 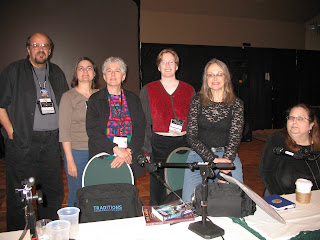 After a leisurely lunch on the terrace (the law of inertia, aided by the lack of sleep, prevented further activity for some time), we watched JPL watch the progress of the Phoenix landing in the ballroom on a big screen.

We went off campus for a nice dinner and then hung out in the room with my friend Cindy Pavlinac, who rode down with us to the convention. Then we danced every which way (the swim, even) to modern Trance? Techno? music in the ballroom. Next, we explored the warrens on the party floor where we found better music.

After two hours of sleep....

Everyone moved in slow-mo. We didn’t attend any panels. Hung out in the dealers room mostly and lunched on the terrace again. A fan from AZ found me at the closing ceremonies for an autograph. Will I ever get tired of that? I doubt it! Bless Serena’s heart, she carried a sign around her neck with the authors she was looking for for signatures and I was at the top. I’m glad she waited till the closing ceremonies to find me. Free advertising! ☺
Posted by Ann Wilkes at 12:08 PM No comments:

I've been getting ready for the BayCon, the science fiction convention in Santa Clara, CA this weekend. I couldn't help but notice that Towel Day isn't mentioned on their website. So, whether you're going or not, this is your reminder: Sunday is Towel Day! Don't forget your towel. For those who haven't a clue what I'm blathering on about, it's a reference to Hitchhiker's Guide to the Galaxy and a memorial to Douglas Adams, author of same, who died on May 11, 2001. You can't go hitchhiking in space without your towel. It's essential for space travel.

I had the privilege of speaking to two high school classes last week. What a rush! The kids were great and they had some thoughtful questions. Thanks to one young lady, I now have a motto. She asked me what my motto was. I got to thinking about a phrase I've been using frequently that I think is original. Ready?

"The positive side of stubborn is determination."
Posted by Ann Wilkes at 12:22 PM No comments:

A friend of mine invited me to a Quincinerra (a traditional Mexican celebration of a girl's fifteenth birthday) for her co-worker's God daughter on Saturday. There were mariachis, a DJ and a brass band. I had already told my kids I wanted to go to the Mexican restaurant in town for Mother's Day because they would have mariachis. So, I ended up with mariachi music twice in as many days. I only wished my Spanish wasn't beyond rusty.

At the Quincinerra, the girl danced with her father. I almost never think about mine anymore, but watching them dance nearly brought tears to my eyes. My Dad died when I was 16. When I was about ten, he would dance around the living room with me standing on his feet. Among his many jobs, he was a dance instructor at a Fred Astaire studio. I come by my love of dancing honestly.

The sting is lessoning around hearing all the Mother's Day ads (I lost my Mom in 1990 to breast cancer). Last year I invited all my girl friends who have lost their mothers out for drinks at that same Mexican restaurant. It completely slipped my mind this year. I intended it to be an annual tradition. On the bright side, perhaps my grief was not there to remind me as it was last year.

Here's a picture of me with hubby, Pat, and my three youngest kids, from left to right, Daniel, April and Wesley. The other two were unavoidably detained in Sacramento. But they made sure to call. :) 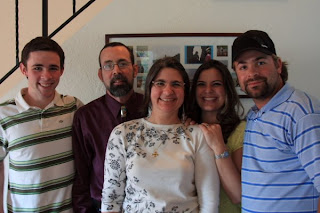 Posted by Ann Wilkes at 8:41 PM No comments:

I received a tentative schedule for BayCon in Santa Clara. I'll be on 4 panels, reading and signing Awesome Lavratt and possibly organizing a Broad Universe Rapid Fire Reading. It just occurred to me today that Towel Day will be during BayCon this year. I'll have to take another look at that schedule. Surely they haven't passed up the opportunity for a Towel Day celebration. Might have to organize an unofficial one, if that's the case. It can't go unremarked.

I've just sent off my story of sentient whale creatures to my online workshop for critiques. Meantime, I'm trying to put a mainstream novel to rights that I started years ago. Someone asked about it the other day and I need something to work on while I wait to send the rewritten story out. I don't want to work on my new novel until the story is sent off since they are both in the same universe covering most of the same events. Too confusing.

Anyhow, the mainstream novel is Blind Date Blues. It has a flaming co-dependent, sharp-tongued woman, a cowboy who doesn't know what to do with her and his buddy who is fond of death-defying feats and alcohol. Oh, and the woman's kid brother dies under suspicious circumstances and one of the three knows more than they're letting on...

I've also sent a number of short stories off to make the rounds again. I'm still waiting for that last mega-issue to go up at Nanobison. I'll keep you posted...

I've started a new regime. Maybe I'll actually stick to this one. I bet the successful writers are the ones that have found that thing, oh what is it?...ah yes...self-discipline. Meaning they can keep their butt in the chair typing away on their novels while ignoring the laundry, the email, the phone, etc. So I've blocked off two hours a day in which I will do NOTHING else. Wish me luck...

I'm going to be speaking at some high schools over the next couple of months. I'm hoping I can keep the students' attention and perhaps even inspire them. A friend of mind warned me about the continuation school. He was afraid they might eat me alive. I doubt it.

I see most of them when I'm out walking the dog. They hang out at the "420 bridge" over the creek behind my house. I've raised five teenagers. I've found that, generally speaking, they don't bite. I treat them all as though they were my kids' friends. I respect them and they respect me back. And they love our beagle.

However, one time, I turned the corner onto the creek path to find a teenage boy of fourteen or fifteen facing me while urinating on the path. He said, "Ahhh...sorry," and put "it" away.

What did I say? "You should be!" and "I don't even let my dog do that!" His friends just stood there. "You're friends put you up to it?" He could only look at his shoes. His friends were probably fighting laughter, though I didn't turn to look. But none of them said a word as I walked on by.

Not one of my more gracious moments. I guess my sense of humor was on the fritz just then.
Posted by Ann Wilkes at 12:55 PM No comments:

Another Awesome Review of Awesome Lavratt!

Wow. I may need a bigger hat. Book Smuggler did a joint review of Awesome Lavratt. Therein are words like: brilliant, wit, skill, quirky, off-beat and--my favorite--wicked sense of humor. It's a must read.

Book Smugglers: Joint Review of Awesome Lavratt
Posted by Ann Wilkes at 11:04 AM No comments: