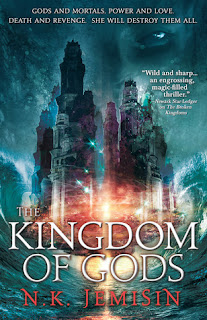 I have to say that this is the best book that I've read (so far) this year. By the final chapters, N. K. Jemisin brought me to tears, and I couldn't even bring myself to begin another book for several days. If you enjoyed the first book, definitely read the rest of the trilogy. This is a series that addresses much more than the juxtaposition of good and evil, all with marvelous characterization, unpredictable but perfect plotting, and exquisite word craft.
Posted by D. E. Helbling at 2:25 PM 1 comment:

Note from Blogger/Editor Ann Wilkes: Sorry, sf fans. I have been without Internet access at home for a week!!! I'm cobbling this post together for you at Starbucks. Now, imagine carrying on with two online classes without Internet at home. It's been a difficult week to say the least. On the other hand, my job prospects just improved tremendously. I'm even going to have benefits. Would you believe that one of them is a free monthly massage? I'm so ready for that to happen!

Can't wait to see this!

Now we nerds will have our day! And it's on YouTube!

The internet and nerddom alike are irrevocably changed with the launch of The Nerdist Channel on YouTube today. Chris Hardwick and Nerdist Industries are bringing a truckload of celebrity talent to the Nerdist Channel. They’re going to take you Face to Face with Weird Al Yankovic interviewing top celebrities. Neil Degrasse Tyson and Neil Patrick Harris will both be bringing their star power to the Nerdist Channel, one more literally than the other as Neil Degrasse Tyson is bringing his hit radio program Star Talk to the channel. Rob Zombie will be bringing his own brand of awesomeness to play in the Nerdist landscape and the Dudesons are going to take this party past the legal speed limit in Gumball 3000.

The Nerdist Channel show lineup has something for everyone. Harry Knowles has unleashed his inner puppet on the film news world in Ain’t It Cool thanks to The Henson Company. See Chris Hardwick knock famous people down a pin or two as he bowls them over in Chris Hardwick's All Star Celebrity Bowling. If your word for nerd is “otaku,” revel in Weird S#!t from Japan. And if you just like to see cute things exploding, there's a show called...uh...Cute Things Exploding. Plus new ways to experience some of your favorites like Kids in the Hall, Farscape and Simian Undercover Detective Squad.

Chris Hardwick has this to say about his brainchild, the Nerdist Channel: "Our programming mandate was simple: what would WE want to see exist in the world? Unlike many production companies or networks, we are actually IN the demographic of the content we're creating... We program stuff we love. All of our shows are very personal and we're very passionate about what they represent." You can read more of what Chris Hardwick has to say about his channel launch in his letter to Nerdist fans.

I've been getting a flurry of short film requests. I'm going to post them here without commentary. (I did mention the bad week.) You can tell me which is worth getting behind.

Hibernation is a sci-fi short film in which an astronaut has a close encounter with his female instructor rather than whatever else he expected to find in space. Not a lot to go on. Hopefully the film is better than the description.


OK, these guys say their script brought them to Sundance this year.
EMIT
Yeah, it's time spelled backwards. And that's what the film is about: time running backwards.
Here's their Kickstarter page.

This is for the guys. I'll look the other way while you watch this movie in which, well, it's sexist and has boobs. Lauren Francesca has been shooting these sf clips for Barelypolitical: http://youtu.be/pgapQkMkWNU

Now if I can just track down and watch that video for school before 8PM Sunday night, things will be peachy. Have a great weekend!
Posted by Ann Wilkes at 8:50 PM 3 comments:

Minister of Chance and much more

Have I mentioned how much I love The Minister of Chance ... less than ten times? ;)

And you can help bring episode 3 closer by buying some cool MOC stuff on eBay.

Mike Renick's Adventures: The Chronicles of Lucifer Jones, Volume I.

Mike Resnick's accomplishments (to date) include 64 novels, 21
collections, 40 anthologies, two screenplays and approximately 250 short
stories, resulting in a couple of shelves of major awards (including five
Hugos from 35 nominations and awards from various countries including
Spain, France, Croatia and Japan).

Of all the characters that Mike has created, Lucifer Jones remains his
favorite. We are proud to republish this hilarious series of adventures
starring a most unique character.

Adventures is the first volume of the Chronicles.

Being a Stirring Chronicle of Intrigue, Romance, Danger, Hairbreadth
Escapes, and Thrilling Triumphs over Fierce Beasts and Fiercer Men in the
Mysterious and Exotic Dark Continent, as Recounted by the Daring,
Resourceful, Handsome, and Modest Christian Gentleman Who Experienced
Them.

Also of note, Mike will be one of my three judges for a sci-fi short story contest I'll be launching soon for Redwood Writers Club. Look for more information soon. The other judges are Madeleine Robins and Juliette Wade.
Posted by Ann Wilkes at 3:12 PM 1 comment: