It's small wonder that I haven't had many story sales for a while, since I haven't been doing much writing, let alone sending my baby birds out of the nest. (Too busy dancing!) However, I did manage to get a flash piece written - three times. Yes, the same one. Every Day Fiction asked for a rewrite of it twice. This poor story has so much going on that as soon as I fixed one part another would unravel. And I had to satisfy several judges, who didn't always even agree with each other, not just one. In the end, the story isn't the powerful one I started with, but I think it's still very good. They obviously did too to spend their time rereading it twice.

Well, I invite you to read "The Curse of Having Been a Man", give me a star rating and leave a comment. Trust me. Even if you don't love it, it will get you thinking. And it's part of my elephant mania. 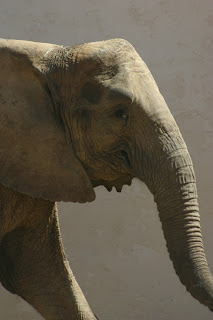 I also had some royalties roll in in spite of my dry year or two. I love it when I get royalties, even if they're meager. Makes me wonder why I should be subbing to mags instead of anthologies. Those two Dark Quest Books anthos are performing nicely. Oh, what are they, you say? Defending the Future IV: No Man's Land edited by Mike McPhail and Beauty Has Her Way edited by Jennifer Brozek.

I have been writing, just not a lot of fiction. I did toy with starting a magazine briefly, been then realized that, yes, that's just crazy talk. My would-be partner is still moving forward with the project. I wish him well, but am glad I'm not saddled with a venture right now. I have enough on my plate right now with my adventure. I'm getting married in August. It's mind-boggling how many details go into planning a wedding.

I mean, the invitations alone! We got the DIY kit to print them at home and then the printer decided to print everything inexplicably in red, unless it was on 8.5 x 11 20# paper. After taking two of the pieces of the invitation to the local digital copy store, we discover that the problem was just a bad cartridge. :(

But I was talking about writing. I've been doing a lot more writing at the day job, mostly promotional stuff: fliers, weekly marketing emails for both locations, social networking, press releases, etc. I want to get more Web content work. I'd like to save the world by fixing one crappy website at a time. I even wrote an email to corporate today letting them know that all their social networking canned posts they sent out to the franchises are grammatically incorrect. They don't get the whole capitalizing dad and mom thing. And it's almost Father's Day, so there were many mistakes. The guy in charge came back quoting the grammar rules that I had already sited. Apparently, he didn't know they weren't following his rules. But at least he got back to me. I'm used to my comments falling on deaf ears. People send stuff out to non-English speaking content mills and don't notice the gibberish that they've paid for. Don't get me started!

On the other hand, do let me know if you can convince your boss to hire me for Web content instead of the penny per paragraph outfit overseas.

Would you believe I wrote a song? Words and music, without the benefit of a musical instrument. Surprised the heck out of me! A love song, of course. My musician fiancé proposed to me with a song, and has written another one for me since. I wanted to return the favor. What's funny is that I swore I'd never date a musician. I had even written a humorous list of reasons why, and posted it on FB as a private note. See, I write!

I have a review of Galaxy's Edge magazine almost ready to roll. You'll see that on Thursday. I just had to toot my horn a bit first. ;)