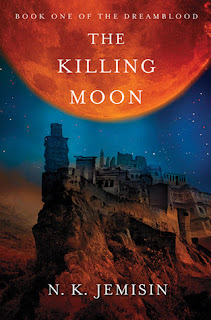 The Killing Moon
Book 1 of The Dreamblood
N.K. Jemisin
Orbit 2012

The Killing Moon begins another unique fantasy tale by one of my new favorite authors, N. K. Jemisin. Like her earlier work (The Inheritance Trilogy), The Killing Moon is set in a world alien to much of the fantasy genre that often clones a medievalesque society and a quest-driven plot. The cultures that Jemisin paints in The Dreamblood are unlike any others that I have experienced, and that is one of the reasons why The Killing Moon works so well.

In the city-state of Gujaareh, Hananja's law reigns over all aspects of life, organized through the central temple, the Hetawa. Hananja is the goddess of dreams, and peace is of utmost importance among her followers, with corruption punishable by death. Ehiru, priest of the Hetawa, is many things. Foremost, he serves the goddess as a Gatherer by attending to the ill and elderly, ending their lives and guiding their souls into joyful dreams in Ina-Karekh. He gathers their dreamblood which is tithed to the Hetawa and used to bring peace to supplicants of Hananja. This same death also awaits those deemed corrupt, and outside of Gujaareh, Gatherers are heralded as gualoh - demons.

The narrative follows three characters - Ehiru, his apprentice Nijiri, and Sunandi, ambassador from the rival city-state of Kisua. When Ehiru completes a routine commission on a corrupt foreign merchant, the magic goes awry. The man's soul is ripped free and lost in nightmare. As Ehiru leaves, he glimpses another figure on the rooftops, but this other man radiates malevolence in the instant before he disappears from view.

Sunandi maneuvers the delicate political field in the aftermath of her mentor, Kinja's, suspicious death. Immediately after she discovers proof that Kinja was murdered, Ehiru and Nijiri ghost into her chambers. Sunandi has been judged corrupt by the Hetawa, and the Gatherers have arrived to bring her Hananja's eternal peace. But when the ambassador confronts her would-be killers, she is able to cast doubt upon the accusations. She believes that Gujaareh's Prince seeks an excuse for war, and the Gatherers desist because they cannot allow anyone to subvert the will of Hananja.

The story sprints between attempts to unravel the truth about the Prince, the Hetawa, and that evil figure spotted atop the city's homes. Rumors say that a Reaper has come to Gujaareh, an abomination of Hananja's dream magic, and a creature so powerful that its presence threatens all of the city's peace.

The Killing Moon is the first book in The Dreamblood duology, but it can be read as a stand-alone novel. All of the plot threads are tied up in the conclusion and you won't be left in the lurch if you don't have the second book on hand. I had minor difficulty orienting myself to the magic and how it worked. The way in which the Gatherers operated was spelled out clearly since they featured as two of the three main point-of-view characters. Other aspects of dream magic, although fascinating, were hard to intuit since they were not shown in action as much.

The Killing Moon was nominated for a 2012 Nebula Award.


Look for the review of the sequel, The Shadowed Sun on Thursday.