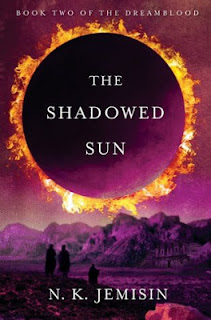 In The Shadowed Sun, we are returned to the world of The Dreamblood, in which priests of the Hetawa practice the goddess Hananja's dream magic. This time, the city-state of Gujaareh is under Kisuati control, occupied and overseen by the opposing city-state after its former Prince's failed attempt at war. Since the primary tenet of Hananja's Law is peace, the people of Gujaareh have submitted to foreign rule with only silent outrage.

Not all the land is calm, however, and the desert barbarian tribes are becoming more daring in their raids, stealing trade goods from Gujaareh. When Apprentice Hanani heals a soldier injured in one of these attacks, she weaves his torn body back together using the various humors collected from dreams in an attempt to pass her Sharer-trial. Her healing efforts are successful, but in the aftermath, a terrible discovery is made. One of the acolytes who served her, along with the tithebearer providing the humors, has died horribly. No cause can be immediately ascertained, so Hanani is indirectly blamed and is forbidden from practicing any further narcomancy.

Wanahomen, son to the ousted Prince, and heir to the Sunset Lineage of Gujaareh has made a place for himself among those barbarian tribes, rising to a position of influence among the Banbarra. With his father's former general at his side, he struggles to convince the desert people to help him oust the Kisuati and regain his city.

The deaths laid at Hanani's feet were not the last, and a plague of dream-driven fatalities spreads through the city. Anyone who tries to investigate the nightmare of those afflicted also becomes trapped by it. As unrest and violence churn within Gujaareh, Hanani is cleared of fault in the mysterious deaths. Despite this, her skills are still in question by some among the Hetawa because she is the first woman ever admitted into training as a Sharer. A new trial is set, and Hanani and her mentor, Mhi-inh, are offered up to the Banbarra tribe by Gatherer Nijiri, a prominent character from the first book, The Killing Moon.

This is a more complicated and longer volume than the first novel, and I liked it better for those reasons. The dream magic used by the Hetawa is an intriguing concept, and I felt more familiar with its practice in this book. I suppose this second installment could be read without having first read The Killing Moon, but I think it would be a more enjoyable read in the intended order. I don't know what the author has planned for her future work, but I would be eager to read more stories set in the Dreamblood world.
Posted by Ann Wilkes at 7:54 AM