Radcon recap #2 - the rest of the story

Radcon day 2 and 3, Feb. 13 and 14 were a blur! I'll try to capture the highlights and the mood. The pictures will help.

I had a rather late night on Friday, but I had to get up at a more or less reasonable hour to wedge in an interview with Laurel Anne Hill before her first panel. I miscalculated how much time I had and was moving pretty slow, so I ended up meeting Laurel before my morning infusion of caffeine. She was very good-natured about waiting with me at the hotel cafe's cashier/coffee bar. The wait was inordinate and when I finally got to the front, the newbie behind the counter was having technical issues. I decided to forego the tea and get on with the interview. Next problem was to find somewhere quiet to conduct the interview. In hind-sight, I should have just done it in the hotel room as opposed to the quiet, remote stairwell that suddenly became a preferred shortcut.

After a delightful interview, I headed off in search of tea, Earl Grey, hot. I had to settle for the only black tea in offing. But caffeine is caffeine.

Saturday was my day of characters. My panels were both on characters. The first focused on how to use them and keep them real and fun. That panel was made more fun by the fact that it included Kevin Shamel of Bizarro Fiction fame. Also on the panel were Christine Morgan and Forrest Armstrong. So what can I say? We kept it real. ;)

Before the next Character panel, I emceed and participated in the Broad Universe reading. I'd like to say we drew a crowd. We had a small but receptive audience - and he bought a copy of Awesome Lavratt. The lack of bodies might have been because of the location and the posters that proclaimed it #2 of the top ten things to do at Radcon, but gave the time as 2 hours after the scheduled time.

The second Character panel was on compartmentalized characters. G. David Nordley led us on an oddyssey of all the reasons why people and, in turn, characters might be compartmentalized and whether we can get away with portraying them in fiction. I think the consensus was that yes, you can, but give the reader a clue as to the reason or motivation for their seemingly split personality.

After a brief rest, I caught my buddy Irene Radford's reading. 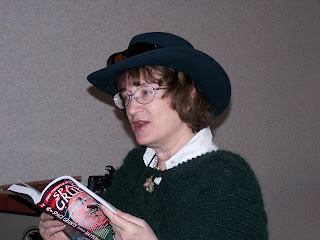 After dinner with my buddies, the four muskateers got together in Maggie's (M.H. Bonham's) room to help her with her mead. 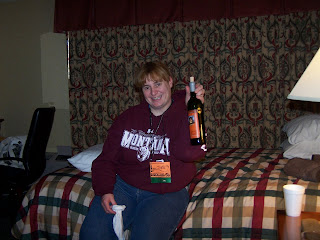 And Andrea (Howe of Blue Falcon Editing) was busily making Jayne hats. If you don't know what those are, you obviously haven't been introduced to Firefly, the best sf show ever. The other muskateer is sf/f writer S.A. (Sue) Bolich. I only managed to get one picture of her and she'll kill me if I post it. 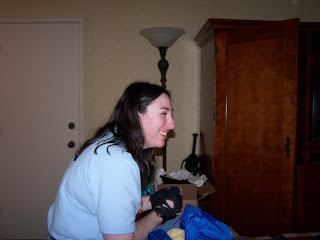 Next up was John Pitts' birthday party / ARC give-away contest. 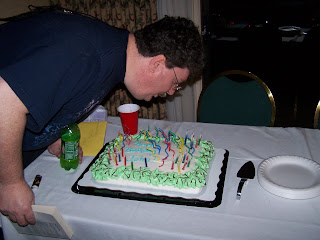 And here he is signing his first book, Black Blade Blues! An SFOO exclusive! ;) 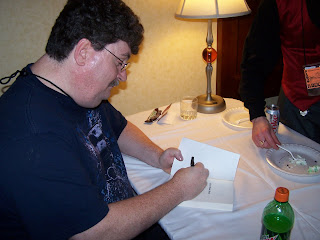 Jay Lake was unable to make it to Radcon. Mark Ferrari, however, dressed up in Hawaiian shirt and fake bird and emceed the masquerade as Jay Lake. I missed it, but here he is sharing a picture of himself as Jay on an iPhone with Patrick Swenson of Talebones magazine and Fairwood Press at the small press party. Looking on are furry-costumed Edgar T. Lincoln and Shannon Page. 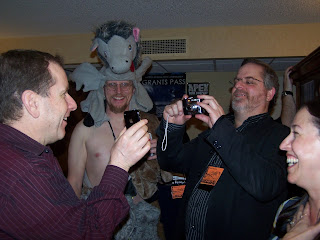 Lastly, on Saturday, I did my celebrity bartending gig with G. David Nordley in the Radcon to Reno bar, relieving Bob Brown and Larry Niven.

Here's the changing of the guard. 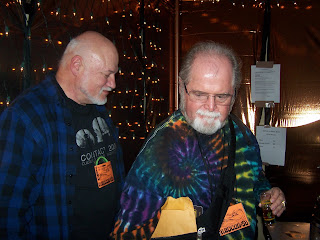 And here's Jerry and I. We did great business. I'm sure it was the March Hare Hat. 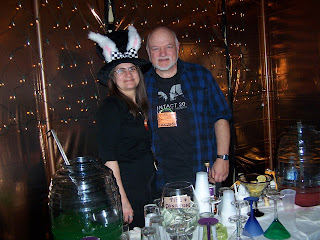 The green stuff was dubbed algae bloom and the red stuff was red tide. We also had rum and scotch shots. The scotch was very good.

Our replacements didn't arrive, so we ended up closing the party at 2AM. But if we'd been replaced I would have missed Dragon Dronet's solo sax performance. 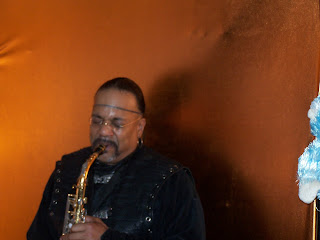 Sunday, my roomie, Sue Bolich, and I stumbled into the cafe for caffeine and stayed for lunch. Friends came and went, and we bid farewell before we traveled homeward. I still had one panel first, on the difference between science fiction, fantasy and horror with Eileen Gunn, Ellen Datlow and C.J. Cherryh. I think I was still half asleep. I did, however, manage to pose the question, "Is all of this categorizing books into sub-genre's causing readers to forego being exposed to books beyond their norm, preventing them from expanding their horizons?" The panel was divided on that one. And then I managed to drop my cell phone under the table in that room, only realizing it after a trip to the dealer's room. By the time I got back the door was locked and the keys deactivated. But I didn't mind so much. My flight was a few hours later and I enjoyed my shiny new review copy of Jack Skillingstead's The Harbinger while I waited for the con staff to sort it out.