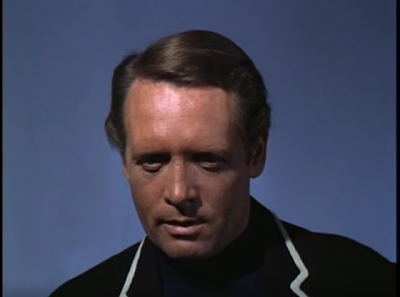 The Prisoner is released! A Blu-ray disk set of the complete original series The Prisoner has been released, anyway. This may not be news to some of you. Indeed, why would anyone not know that the most brilliant television science fiction series, perhaps the most brilliant TV show ever made, is now on Blu-ray?

The short answer is that some of us Luddites (me among them) are just now finding our way to Blu-ray. (Yes, I do still have functioning, connected VHS audio cassette players connected to my media center.) The good news for you readers of Science Fiction and Other ODDysseys is that we are giving away a copy of this Blu-ray DVD set, AND a Blu-ray DVD set of the complete first season of Space 1999 as part of A&E Home Video’s Sci-Fi and Culture Classics Blu-ray prize pack giveaway. 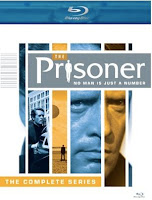 This release has apparently carried over much the same “extra materials” content from MPI Home Video that was in the earlier DVD releases. It also includes a nifty map of The Village and a nicely produced 60 page episode guide. Another feature: the episodes of the series appear in the order that many agree is the originally intended order. This has been a subject of considerable debate among diehard Prisoner fans since the original UK and US airings of the show, both of which had their own unique ordering.

If you are among those who have never seen The Prisoner, who have never seen the remake series, or even heard about them, it would seem reasonable to offer you a description of what this show is about. But it is not as easy as it sounds. In short, a spy tries to resign his position, and ends up a “guest” among many others in a sort of resort for those who know too much.

But that is only the beginning. This is no shoe phone and microfilm spy show. Lots of action and intrigue, yes, but here we get layers, illusions, and lots to think about.

Patrick McGoohan liked to use the word allegory to describe the story lines and the essence of the show. Many of the episodes are still being interpreted in new ways today, years after their original airing. Some of the content was deemed too controversial for airing when it was originally released.

McGoohan’s portrayal of Number Six, the central figure of the show, is as captivating as his direction and writing. While some controversy lingers over who originated the idea for the series, no one can argue that the show and most of the scripts are the product of McGoohan’s vision, dedication, and genius.

Some retro shows are fun to watch again now, in the light of “modern” standards of production and current political reality simply because they are campy fun. While there is a certain small element of that here, The Prisoner still stands up strong. Even the music choices for many of the episodes feel timeless.

Serious fans should check out the official Prisoner Appreciation Society Six of One. There are several other active clubs still out there on the net as well.

There are also some great interviews of Patrick McGoohan available for free viewing out in YouTube country and elsewhere. Here is one of my favorites, in two parts (but don’t watch it until after you have seen the series at least once):

I could go on and on, but instead I suggest that those of you who are interested in learning more about The Prisoner should go to the experts: pick up one of the many excellent books on the show that have come out over the years. One of my favorites is “The Official Prisoner Companion”, by Matthew White and Jaffer Ali. (Yes, even this book is retro.)

Now … about the contest!

Here are the simple rules. The grand prize is a new copy of the Blu-ray The Prisoner disk set and Space 1999: The Complete Season 1 delivered to your door. To win, examine the picture below, showing the penny farthing bicycle that is a regular feature of the series, and identify what is “off” about this picture by commenting on it here on the Science Fiction and Other ODDysseys blog. 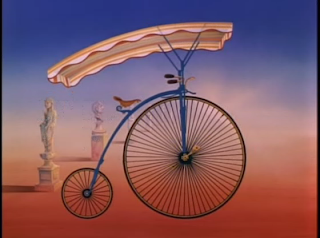 Too hard? You can also qualify by answering this Space 1999 trivia question. 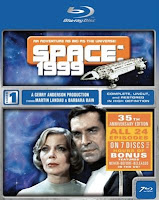 In Space 1999, Catherine Schell played a character in the first season, before being cast as Maya in the second season (or series as the Brits calculate). Name the episode and describe the character she portrayed.

Among those who comment with the correct observation or answer (or both, if you want to show off) before February 25th, one randomly selected person will win the prize, which will be shipped directly to you courtesy A&E Home Videos.

And because you are not numbers, you are human beings, I will send a used but readable copy of “The Official Prisoner Companion” to the three persons who post the best “my favorite episode” anecdotes here in the comments where “best” is determined by me. (Again the deadline is February 25).

I do not remember the statues in the background. It was just the penny farthing bike.

Catherine Schell was in the episode Guardian of Piri, and she playing the guardian's robotic servant. She is credited only as Pirian girl.

The statues are there in the background on the ending, Ed. And the numbers appear on the pennyfarthing when it's the badge that the individual residents of the Village wear -- a much simplified version of this pennyfarthing. My memory (and I haven't checked any pictures) is that the pedals were in a different position. And it's odd that there's only one pedal visible on this -- they should be going out both directions on the diameter defined by the one pointing up at about 1 o'clock. Yeah, the one behind the spokes should be harder to see, but it should be there at least a bit.

THe end of the canopy is not held up by braces.

servant of the guardian

as for the prisoner intertitle, besides not saying the Prisoner in white letters, the canopy has the poles on the back and front.