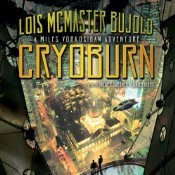 I don't know how she does it. Lois McMaster Bujold weaves engaging characters, twisted plot lines, and fascinating social ideas together like few other authors can. By the end of one of her novels, you realize that every seemingly trivial piece of information was essential. While at the same time, you can never quite guess the ending. Her newest Vorkosigan adventure, Cryoburn, is no exception.

Miles Vorkosigan - former mercenary commander, former Imperial Security agent and physically handicapped son of Count Errol Vorkosigan - becomes entangled in another investigation as Imperial Auditor for the Barrayaran Empire. On the planet of Kibou-daini, citizens are obsessed with forestalling death and consign themselves to cryostorage. Their bodies are preserved until a cure is found for illness, injury, or just old age. Assigned to attend a scientific conference on cryonics, Miles is on the lookout for suspicious business dealings that may impact Barrayar. Those who have read previous Vorkosigan novels will remember that Miles is intimately familiar with cryostorage techniques, having undergone the life-preserving procedure himself after taking a needle grenade to the chest.

In the course of his meandering investigation, Miles befriends a runaway boy, Jin Sato, and his menagerie of creatures. After Miles is not-quite kidnapped by a faction of domestic terrorists, Jin inadvertently leads him to an underground cryostorage facility that exists to benefit those who cannot afford the services of the large corporations. The situation is complicated by politics - for each preserved cryo-corpse still retains voting interests on Kibou and these shares are bought and sold by various groups. Once Miles spots an anomaly he cannot let it go. When he discovers that Jin's activist mother may have been illegally frozen to get her out of the way of a cryo-corp's ambitions - he feels obligated to help, even though it may have no direct bearing on Barrayaran interests. The plot spirals into more convoluted scheming from there, with Miles always at the heart of it.

The story is told through the point-of-view of Miles, Jin, and also Armsman Roic, who has featured in previous Vorkosigan stories. The book is narrated by Grover Gardner, and I have enjoyed his performances of the other Vorkosigan audiobooks put out by Blackstone Audio. To me, he is the voice of Miles, and I appreciate it when a publisher is consistent with their narrator for an ongoing cast of characters. There were a few sections of dialogue where I had minor difficulty in following each character's speech, but this did not distract me much.

While this may not be the strongest Vorkosigan novel that I've read, nor my favorite, it is pulled together by an ending that is part punch-in-the-gut, part tear-jerker. Suddenly the subject matter of the relatively light-hearted investigation becomes critically relevant to Miles' future. The clues were all there, but Bujold never hits you over the head with them. If you've never read any of the Vorkosigan books by Lois McMaster Bujold, then Cryoburn is not the one to start with. But if you have read them, it's a must read and sets the stage for a new chapter in Miles' life.
Posted by Ann Wilkes at 8:58 AM