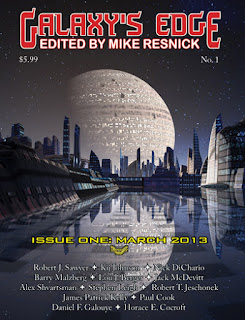 I loved how Mike Resnick kicked this new magazine off with an entertaining and often humorous look at the history of science fiction magazines in his Editor's Word.  The opening story, however, was a bit of a disappointment. I'm a fan of Robert J. Sawyer's. I even interviewed him twice here on Science Fiction and Other ODDysseys. "The Shoulders of Giants" struck me as three talking heads conveying his cool premise. Nothing really happens. They go somewhere. They arrive. Things aren't what they expected. They decide to leave. That's the whole thing. I'm guessing that this was a trunk story (copyright 2000, by the way) that Rob trotted out to throw at a new magazine, not wanting to give up his best work on a new venture. Just goes to show, even the best writers produce some stinkers. Sorry, Rob.


In "Schrodinger's Cathouse", Kij Johnson (also interviewed herein) shows us a man who takes an unexpected trip down the rabbit hole while sitting at a stop light. Reality bends on him again and again, though a few things are constant. He tries to hang onto the things that don't change and is guided by a person of undetermined or perhaps changing gender. She attempts to help him, then seduce him - it is a cathouse after all - and just when he decides to go with the flow, he gets another curveball that is just too much. It's an amusing tale that speaks of our inability to venture far from our social norms.

"Creator of the Cosmos Interview Today" by Nick DiChario is just plain weird. It's another fish out of water story with an interesting premise, but left me scratching my head a bit and not feeling very satisfied.

The nonfiction piece that follows, "From the Heart's Basement" by Barry Malzberg, is a rant about the "in" club of the specfic world and how we're not in it. It would be an interesting blog post, but I'm not sure why it's in the magazine. Too depress us and make us give up?

"Just a Second" by Lou J. Berger is the first story that really held my attention, even though it's predictable. A man asks for a potion, achieves success, but is never satisfied. In the end, he gets his comeuppance. The compelling prose and the colorful characterization pulled me in and didn't let go. I loved hating this guy!

The science in "Act of God" by Jack McDevitt is pretty hokey and it's a long tell. In fact, the whole thing is one side of a conversation. Reminded me of an Outer Limits episode about teleportation (from the reboot version of OL), but was all telling about it after the fact. It would have been stronger if I could see the action and get to know the players along the way.

I thoroughly enjoyed "Requiem for a Druid" by Alex Shvartsman. What I liked most was the protagonist's voice. He's an underdog and a fraud, but makes a decent living for a non-gifted by faking it with his bag of tricks. And the real estate developer, for once, isn't pure evil, but an astute, open-minded businessman who keeps the peace and still gets something for himself.

I didn't finish reading "The Bright Seas of Venus" which was not really what was advertised as the writer admits directly to his readers as he's telling us how much he hates us. This bit of reader thrashing was delivered by Stephen Leigh.

"The Spinach Can's Son" wisks us through the "underfunnies" where comic strip physics are skewed and nothing works quite right. This is a back drop for a married couple who are mourning - each in his/her own way - the loss of their son.  Robert T Jeschonek wrote this fun diversion.

A fabulous reprint from James Patrick Kelly will keep you thinking long after you've read it. Honestly, just reading this and Mike's Editor's Word makes all the other mediocre stories forgiveable and the magazine worth picking up. The reprint is "Think Like a Dinosaur" and involves teleportation, the balancing of the equation and the prospect of adopting alien thought to justify doing the unthinkable thing set before you. Can you kill a person to keep the universe in balance?

At the back of the mag, Horace E. Cocroft offers an essay entitled "Economics in SF" for the Something Different column.

Also included in each issue are book reviews and part of a serialized novel.
Posted by Ann Wilkes at 8:19 AM