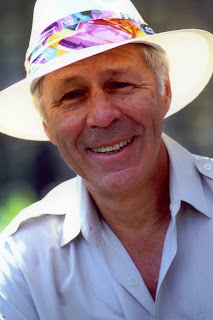 It was my great pleasure to have the opportunity to interview science fiction author, Ben Bova. Dr. Bova has penned over 70 novels and 34 non-fiction books. There are 15 novels in his Grand Tour of the Universe series alone. After reading the interview below, make sure to scoot over to Mostly Fiction for my review of three Grand Tour books, including the latest,
Mars Life.

AW: Dr. Bova, I'd like to first take this opportunity to tell you how much I've enjoyed every book of yours I have read. With Mars Life, I was astounded at how thrilling you made the exploration of a relatively barren planet - and without the use of first contact with little green men. I also appreciated your rich characters and expert sprinkling of present and near future science. The obviously well-researched science enhanced the story of planetary discovery and Jamie's struggle to save Mars from exploitation. the opportunity, would you spend a year on your vision of Mars?
Dr. Bova: I certainly would! I think Mars is at the frontier of our search for life in the universe. If we find life on Mars – even if it’s been long extinct – it means that Earth is not the only place where life can exist. It can change our vision of who we are and what our place is in the universe.

What inspired you to give control of your Mars to the Navajo nation?
Dr. Bova: It began when I first started writing the first novel in my “Mars” trilogy, the novel titled Mars. I lived for a while in the southwest, because the landscape of the Navaho lands reminded me very much of the pictures our spacecraft were sending back of the landscape of the red planet. Of course, the Navaho lands are a blooming Garden of Eden compared to the planet-wide freezing , but still the comparisons struck me. It was then and there that I realized that the protagonist of my novel was part Navaho. Jamie Waterman was born in my mind, and his is still the central character in all three of my Mars novels. From Jamie came the idea to give control of Mars to the Navaho nation.

AW: How has the current political situation affected your writing?
Dr. Bova: Most of my novels have a strong political theme. In Mars Life and others in my Grand Tour series, most of the nations of Earth have come under the rule of very conservative religious-based governments. I think this is a real possibility for the , and could be a grave danger to our individual liberties.

AW: Your nanosuits would certainly enhance the experience of exploring other planets. How close are we to having something like it?
Dr. Bova: Not very close, I’m afraid. On the other hand, Mars Life is set about half a century in the future, and a lot can happen in fifty years.

AW: Do you foresee humans colonizing other planets and moons in the next 100 years?
Dr. Bova: Not colonizing, in the sense that large numbers of people settle on other planets. I think we will see permanent communities built on the Moon, because of the mining and industrial operations that can become very profitable there. But those communities will have to be built underground, since the Moon’s airless surface can be very dangerous. Mars and the other planets and moons in the solar system are too far and too different from Earth to be likely places for “colonization.” I don’t think terraforming a planet is either feasible or desirable. I do believe that large habitats will be built in space (mostly out of lunar materials) for permanent residence. But the actual number of people who leave Earth to live off-planet will be comparatively small. Still, what they accomplish in those off-planet sites will change life on Earth – for the better.

AW: If and when we do, should we adapt the planet to our use or adapt ourselves to the alien planet if we can?
Dr. Bova: As Jamie Waterman would put it, leave Mars to the Martians. The other worlds of the solar system should not be transformed into Earth-like places, even if we had the ability to do so – which we don’t. As I said above, we can build habitats in space that are completely Earth-like, such as the Goddard habitat in my novels Saturn and Titan.What's your stand on Pluto? Planet or not? Do you plan on getting out that far in your Grand Tour?
Dr. Bova: Pluto is still Pluto, no matter what we call it. I don’t have any immediate plans to take the Grand Tour that far, but then I had no idea that I’d be writing more than a dozen Grand Tour novels when I started writing Mars.

AW: What are you working on now?
Dr. Bova: I’ve turned in to my publisher (Tor Books) Voyagers IV: The Return, a novel that brings together the Grand Tour sags with my earlier Voyagers Trilogy. I’ll be doing a high-tech thriller next, then probably return to Jupiter for Leviathans of Jupiter. Oh, I’ve also written an historical novel, titled The Hittite. It’s about what happened to Helen after the Trojan War.

AW: Thank you for taking the time to field a few questions for our readers.
My review of Mars Life at Mostly Fiction.
Dr. Bova's home page.