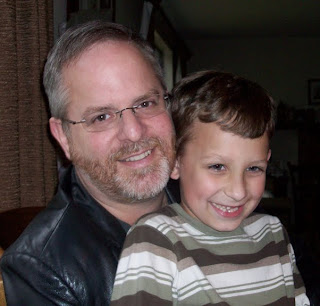 Patrick Swenson is a bit of renaissance man. He's a publisher, editor, writer and retreat organizer. And a doting father, as you can see by the photo with his son, Orion. I met Patrick at a room party at Radcon, where I scored an ARC of Jack Skillingstead's Harbinger. I asked for his card and he gave me three. Visit Patrick at Fairwood Press, at Talebones where you can get back issues of his late magazine or at the Rainforest Writers Village.

And here he is in that element with fantasy author Mark J. Ferrari at that very room party. It was the small publisher's party. 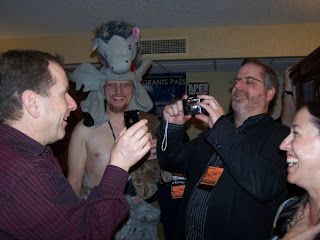 AW: As a publisher, how do you research what's selling? How hard is it to hop a trend before it fizzles?

PS: In my niche as a small publisher, I'm afraid I can't worry too much about trends. Trends are not going to affect my sales, really. And since I’m just one guy with a full-time teaching job, I don’t have the time to do that sort of stuff anyway. What I look at is: What authors have gathered a following and are visible? Who are the authors I like? Which of them are willing and able to help promote their titles?

AW: Do you only publish collections?

PS: I do mostly collections. Out of the 35 titles I’ve done so far (not including the six coming out this year), there have been eight novels, four writer reference books, two poetry books, and one book about diabetic eye disease! (I knew the eye doctor who wrote it, and I helped him with it). Anthologies and poetry collections are hard sells and don’t make money, for the most part.

AW: What is your favorite book Fairwood Press has published? Was it the top seller?

PS: I have a lot of favorites, to be honest. All four books I’ve done with James Van Pelt, for example. His collections are dynamite; he’s a fabulous story writer. I have to put his novel Summer of the Apocalypse, which is my top seller, near the very top. It was published in 2006 and it is still selling better than most of my newer titles! I love Ken Scholes’ first collection, Long Walks, Last Flights and Other Strange Journeys. I’m working on Ken’s second collection, Diving Mimes, Weeping Czars and Other Unusual Suspects, and I think it’s even better.

AW: Do you accept unsolicited manuscripts? If so, how does a novel slush pile differ from a short story one?

PS: I don’t accept them. I get all of my book projects on my own. Mostly I ask writers I know, and mostly these are writers who had stories in Talebones. Sometimes an author will ask me. Nina Hoffman approached me at Orycon last year and asked me about a collection. How could I say no? Actually, I picked up four book projects at Orycon. They are all Talebones alumni.

Someone like Jack Skillingstead, who tried to sell me stories at Talebones for years, eventually sent me a story I really liked. He was always “so close,” and I did like his writing style. Later, we became friends. Did being friends with Jack make me more likely to publish his novel Harbinger? Maybe a little, but I also had to like the novel (which I did a lot).

Closing down Talebones last year effectively stopped my R&D department for Fairwood authors. This is why I’ve toyed with the idea of doing a yearly Talebones anthology. It would be open to submissions for a limited time and I’d probably do a few more invites.

AW: Which do you prefer reading – novels or short stories? Do you have time to read for pleasure?

PS: I love novels. I grew up reading the classic science fiction novels by Clarke, Heinlein, Dick, LeGuin and Herbert. I just don’t have nearly enough time to read for pleasure any more. I’ll have a book on my nightstand and it will take me a loooong time to finish it because I have too many other things going on; too much other reading I have to do. I don’t own a Kindle, but I recently downloaded the free Kindle for Android application for my phone, and I’m going to try reading a few books that way. Because I’m so far behind with some authors, their books are now in paperback, or their Kindle prices are now cheaper than a lot of the newer releases.

I do love short stories, naturally, or I wouldn’t have taken up magazine editing. I wasn’t much of a short story reader when I was younger, although I do remember devouring the SF Hall of Fame and the Hugo Winners anthologies and being blown away by so many stories. It’s that sense of awe and wonder I fell in love with in science fiction. Nowadays, I can always take the time to read one or two short stories in a sitting and feel satisfied.

AW: Do you get involved with changes to the title of a book? Have you ever thought of a perfect title for a book after the fact, when it's too late? Can you "say" a few words about the qualities of a good title and how important a title is? A cover?

PS: I always work with the author on the title. For a story collection we usually try and figure out what story in the collection would be the best title to draw readers in. Sometimes a book title comes with the manuscript, and it’s already perfect. Jay Lake’s Rocket Science. Jack Skillingstead’s Harbinger. But sometimes they need a tweak. James Glass’s original title for his Fairwood novel was Culebra, which was the name of the main character. In the novel, Culebra means “viper.” The character’s home was a planet called Portello, so the title eventually morphed to The Viper of Portello. Had a nice rhythm to it, too. I’ve so far never had to second guess a title.

I can’t stress enough the importance of a good cover. I’ve been pretty lucky with my covers. I have a few artists I work with who do great stuff. I often I do my own covers using stock images. I’m particularly pleased with Louise Marley’s omnibus edition of The Singers of Nevya, that consisted of three stock images. The cover really pops, and it didn’t cost me an arm and a leg. Put a bad cover or a bad design on a book, and readers are going to pass it over. Everyone with a desktop publishing program and access to the Internet can get a book published, but believe me, I’ve seen some of those covers, and they are not pretty.

AW: What do you think about mash-ups? Do you think Tolstoy and Austin would be offended or amused by Android Karenina and Pride and Prejudice and Zombies, respectively?

PS: I’ve never read any of them, but I always see them, and I’m definitely amused. I have to think the authors would feel much the same way.

AW: Tell us about Rainforest Writers Village. What makes it special?

PS: The Rainforest retreat has really grown. The retreat for next year sold out in just over a day. So many people wanted to go and didn’t have a chance to sign up, that I decided to add a second session the following week. I’m a glutton for punishment. But really, I love it. And the writers who’ve been to it love it, and the whole thing’s infectious.

When I did the first retreat, I had this idea that writers would hang out in their rooms and cabins and write, eventually coming out for air and group activities, but what happened was that they immediately gravitated toward the whole community writing thing. Nearly all of them ended up in the resort’s lounge (which is reserved for us during the retreat) and were writing most of the day, at the times most conducive to their sleep patterns! Night Owls and Early Birds. I’m always in charge of the Night Owls, and I leave the key to the lounge in my cabin for the Early Bird in charge to pick up.

I came in one morning (late morning, that is) that first full day of the first retreat and there were about 20 writers in the lounge. It was amazingly quiet at that moment, the only sounds the click clack of the laptop keys. Some folks were staring out at the lake through the big picture windows. It rained a lot that year, and there was this warm, cozy feeling that welled up in me watching this scene and it about moved me to tears.

PS: A lot of writers are local to the Seattle-Portland area, but the retreat gets a few writers from locales far and wide. And of course there’s our crazy Calgarian contingent. This Canadian group loves the retreat and they keep telling their other writer friends about it. As long as they keep bringing their special Canadian Coke (the carbonated kind), we’re good with that!

AW: Can you give us the particulars?

PS: The retreat is $150 for five days, and includes breakout sessions (I only schedule two one-hour sessions each day because the main event is of course writing). It includes three breakfasts, one other group dinner, and drinks and food in my big cabin which doubles as the retreat office, hospitality room and sometimes a writer presentation room. Some of the cabins have kitchens and there's a restaurant on the resort and a few others nearby.

AW: Tell us about your writing.

PS: About the time I consciously decided to get back to my own writing was the time I decided I would close down Talebones magazine so I could get more time to write. It was also right around the start of the 2009 Rainforest Writers Village. Even I get to sit down and write at the retreats sometimes.

I got going on a novel that had been languishing for years, and after that retreat, I vowed to finish it before the year was up. I’ve rewritten and edited it and sent it to first readers, and written the synopsis. It’s about ready to go out to an editor who asked for it. Meanwhile, I had another novel that only had a couple of chapters that I hadn’t looked at for a long time. I started that one again at the 2010 retreat.

The finished book is called The Ultra Thin Man and is a science fiction noir mystery. (Do you want the little few sentence pitch I gave? It’s here: Two ex-private eyes who used to work together now contract for a large intelligence organization, and they’re set up to take a fall for something larger than they can possibly imagine. They’re on the run, split up on different colony worlds, trying to solve the mystery while staying alive and one step ahead of the bad guys. The problem is, they don’t even know who the bad guys are.)

The newer novel is a ghost murder mystery set around the area of the Quinault Rainforest where the retreat is held. I taught my first three years of school here and worked in the summers at the resort, and the novel pulls in some things that actually happened during my time there. The working title is Rain Dance.

Patrick is the epitome of what all good small presses should be, and representative of what the very best ones bring to the publishing table. (And a rather nice fellow, to boot).

Patrick does an excellent job with Fairwood press. He got a keen eye for talent, and a successful track record for his books.

On top of it, he's an excellent author.

Multi-talented guy all around.

Thanks for doing this interview of Patrick. He's a great editor, and the Rainforest Writers' Village is an amazing opportunity he organizes for writers to write in a beautiful environment