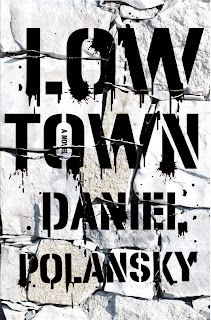 Low Town is a colorful but dangerous place, as well as being a fast-moving first novel from author Daniel Polansky. In this blend of gritty fantasy and murder mystery, the unlikely hero is the Warden, a drug dealer in the seedy district of Low Town. When he stumbles upon the mangled body of a missing girl, he cannot leave the investigation to the agents of the Crown. He was once an agent, one of the best in Special Ops. With his former partner heading the investigation, and his friends pressuring him to find Little Tara's killer, the Warden has to act.

Orphaned by the plague, the Warden was raised by the Blue Crane - a senior mage who developed the wards that still protect Low Town from the return of the Red Fever. When he needs assistance with the case outside of official channels, he breaks his self-imposed exile to reunite with the elderly magician. The visit also reintroduces him to a Celia, a childhood friend now grown. Nearly a Sorcerer First Rank, she will soon take over the Crane's duties.

While waiting for word from the sorcerers, the Warden uses his underworld connections to track down the man who molested and killed Little Tara. He is unable to accost the man when a wraith-like creature appears, summoned by magic. The murderer is slain by the wraith, but no one else witnesses the event, and the guardsmen and agents are stumped. The Warden has seen such a wraith before, and his suspicions lead him further into danger just as another child goes missing.

There was an awful lot going on in Low Town, both in terms of plot, worldbuilding, and backstory. While I thought that some aspects of the plot didn't make as much sense as I would have liked them to, I was so swept up in the action that the overall experience was positive and exciting. The writing was fresh and the foul language the characters used was nicely original. While some of the characters had annoyingly patterned names (Tancred the Harelip, Yancey the Rhymer, Eddie the Quim), this was a minor complaint for me. The Warden was likeable in some ways, but a real jerk at other times, and this made him intriguing to read about. The only problem that I had with him was that for most of the story he seemed to function fairly well for someone who dabbles in his own merchandise of pixie's breath and dreamvine.

I did find the conclusion moderately predictable and I wished that more space was given to the final scenes. Once the culprit was discovered and confronted, the book was over really fast, and I had hoped to see a greater emotional resolution. But perhaps being disappointed that the book was over is a sign of how much fun I had reading it.

Here are the foreign jackets, from left to right, for the UK, Spain, Italy and Germany. The UK version has a different title, but it's the same novel. Told you they were snazzier.