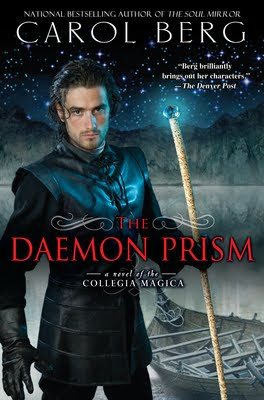 The Daemon Prism: a novel of the Collegia Magica
Carol Berg
Ace Roc 2012

The Collegia Magica series, of which The Daemon Prism is the third and final book, is one of the best fantasies I have encountered in years. The first book was also my initial exposure to Carol Berg’s work, after I got the chance to hear her read from it at a science fiction convention a couple of years ago. Intrigued by the characters in the snippet she read, I bought the book and discovered a gem of an author, a grand master of characterization. Berg takes chances with her characters in ways that have, frankly, inspired me as a writer, and that leave them imprinted indelibly on your memory and your heart.

The Collegia Magica, set in a Renaissance world with vaguely French and Latin underpinnings, is about a struggle to unravel the deadly mystery surrounding an attempt on the king’s life, and then to stop the unscrupulous sorcerers who want to turn the world—and the afterlife—literally inside out. To stop them, each character must also unravel the mystery of themselves, for each is not really who he or she believes.

The narrator of The Spirit Lens, Portier, is a young, physically unprepossessing librarian with an extraordinary knack for surviving what would kill anyone else. His fellow agentes confide, the fop Ilario and the intemperate, bitter mage Dante, have precious little use for each other and harbor explosive secrets. Anne de Vernase, narrator of The Soul Mirror, is heir to a stunning heritage of magic and loathes all of it. The series traces their struggle to understand how they fit into both the problem and the solution as they race to save both their world and the souls of their beloved dead from feeding unspeakable magic.

Accepting what they find is an obstacle for each of them, from the leap of faith surrounding Portier to the realities of Anne’s dangerous heritage to the real explanation for Dante’s unusual magical abilities and uncontrollable temper. These struggles are, in a way, even more fun than the larger mystery, and all enlivened by Ilario, whose humor is matched by his loyalty. Since I refuse to give spoilers in reviews, I will say no more except that each of these four characters is so well drawn you will wish this series carried on and on instead of stopping at three books.

The Daemon Prism picks up the story two years after the titanic magical struggle that concluded The Soul Mirror. Our heroes are widely scattered, recovering from those events, and a fair bit of the action involves characters traveling to the one place they can stop the plot, a city so old that even its rightful name is nearly forgotten.

Once again we have a new perspective on the action. Berg always writes in the first person, and unlike many series, she changes the point of view character from book to book. The first two books maintain a single POV; The Daemon Prism switches several times, a necessity considering that the action is far-flung and the characters scattered. This is fine, but it does contribute to a couple of noticeable structural weaknesses. It was fairly obvious in the middle section that the author needed to stretch out the time frame in order for all the players to unravel the mystery and come together. It also contributed to one wishful instance for me, in that I would rather the climactic scene had been written from Portier’s POV instead of Anne’s.

The Daemon Prism is both more and less satisfying than the first two books. Less, because the characters are geographically separated for much of the book and therefore the interaction we love to see among them is largely missing. More, because the climax is both so poignant and so inevitable that you won’t soon forget it. Each previous book was complete and satisfying in itself.

As with all great fantasy, there is sacrifice and loss and the realization that even heroes don’t always get what they want or deserve.

This book was wonderful, but there were a few things that caught my attention: the somewhat saggy middle stretch, the slightly one-sided villains, the abrupt disappearance of Dante as narrator, and the fact that I would far rather have had Portier as the POV character for the climax. He was the endearing narrator of the first book, and we got to spend far too little time with him in this one. He is also the catalyst for the conclusion, which felt a little rushed, and it would have been nice to see his reaction to it all from the inside.

Dante’s absence is both necessary and predictable due to the way Berg constructed his choices for battling his enemies, but it would have been nice to dip into his head at least once in the final section of the book to see his struggle from the inside. I also felt one major plot thread ended somewhat serendipitously with the fearsome tetrarch who has pursued Dante with grim zealotry throughout the book defanged rather conveniently toward the end. I know from talking to Berg that her publisher was concerned with word count and she was forced to shave scenes that might have mitigated this feeling of sudden endings. Sometimes the author doesn’t get to present the book he or she would like to.

The Collegia Magica is for readers who want more than a recycled version of the current hot trend in the genre. Berg is a gifted writer who builds believable worlds and truly memorable characters; an author I am so glad to have discovered. I highly recommend the Collegia Magica, and The Daemon Prism does not disappoint as a touching and satisfying conclusion to an excellent series.
Posted by Ann Wilkes at 8:00 AM