Rate Me Red worth being read 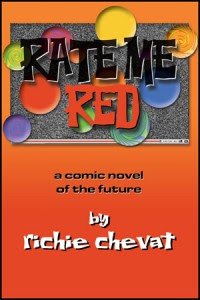 In Rate Me Red, by Richie Chevat, it is 2043, and reality television, social media, and online shopping have united into the VidNet. Anyone can host a VidNet show, and the popularity of the show is one factor that determines each individual's rating. In this exaggerated social future, your rating on the VidNet determines where you can live, who your friends are, and which modes of transportation are available. The scale ranges from Blue to Red, with the Blues living as near-outcasts, and everyone in-between aspiring to become Red. This is all sorted out by the VidNet computer system, which displays your color rating on a button, worn at all times.

Amid this setting, Gordy is an average-Joe Yellow who works at VidNet headquarters. His girlfriend, Poppy, is also Yellow, and has a moderately popular VidNet show. Gordy and Poppy love each other, but have never met in REALITY(TM). Aspiring to ascend the color rating ladder, Poppy proposes something daring. She asks Gordy (live on her VidNet show) to meet up with her to have sex in REALITY(TM). Gordy cannot refuse (and why would he?) because his rating would suffer, and they begin to make arrangements for a lunch date. While his morning passes with excitement and anxiety, Gordy cannot help but wonder - if Poppy will break up with him if her rating rises to Orange as a result of their date in REALITY(TM).

The story follows a single day in Gordy's life, beginning in his bathroom, where he fends off dietary recommendations from his toilet and advertising from his toothbrush. As he arrives at work, Gordy chats with a friend over the VidNet, even though they are standing beside each other. Further details of this bizarre world are revealed in interactions with a Rejectionist and an AD, but it all follows logically from the initial premise.

On one level, this book is a light-hearted story of Gordy's misadventures in a strange world. Yet it is also a satire of our cultural obsession with reality television, consumerism and image. It made for a surprisingly effective novel on both levels. The message is clear without becoming preachy, and although certain aspects of the ending were predictable, Chevat brought all of the character arcs to a satisfying conclusion.

As a self-published book, Rate Me Red was well constructed. I'm easily irritated by typos, slipups in grammar and awkward writing. There were a few minor glitches in the beginning of the text, but after the first third of the book I don't remember noticing these errors. Gordy's plight became so engaging, that I was completely wound up in the story. The cover is simply designed with a pleasing graphic and clear fonts that do not detract from the book. The copy I received feels as substantial and well-bound as any book from a regular publisher.

This is a tough book to categorize and may not initially appeal to regular readers of science fiction and fantasy. However, I found it just as action-packed as a traditional space opera or sword and sorcery novel. The concept, characters, plot and writing all worked to make it a riveting experience. I'm not sure what else to even compare it to, except to say that I'm glad I read it, and I think it would appeal to pop culture's fans and critics alike.
Posted by Ann Wilkes at 3:51 PM