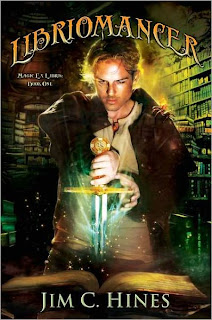 Have you ever been so caught up in a book that you felt like the story, characters, and the items within were just as real as this world? Have you ever wished that you could pull a particular fictional item out of the pages? Well, in Libriomancer, by Jim C. Hines, Isaac Vainio can do just that. He's a libriomancer and a member of Die Zwelf Portenære, the world-wide organization that oversees this magic, known more simply as the Porters. However, Isaac and his fire spider, Smudge, are stuck cataloguing books at a library in the Upper Peninsula of Michigan. He is forbidden from practicing libriomancy after an incident with zombies and is banned from field work for the Porters.

Many books are open to the use of this magic, but only small items can fit through the pages. Johannes Gutenberg, creator of moveable type printing, has locked more dangerous volumes to prevent items such as The One Ring or an untreatable virus from being realized. In this story, Gutenberg also discovered libriomancy, established the rules of its practice, and is one of the most powerful men in the world, artificially prolonging his life with magic.

During a quiet day at the library, Isaac is alarmed when Smudge starts to smolder, a sign of imminent danger. Isaac clears the library of patrons and pulls a disruptor pistol out of a science fiction novel just before three sparkling vampires walk through the door. The Sanguinarius Meyerii vampires make demands upon Isaac and when he refuses to cooperate, violence ensues. Before the vampires can finish him off, Lena Greenwood arrives to assist in the fight, using her wooden bokken and her powers as a nymph to overcome the enemy.

Isaac has known Lena for several years. Once the two of them are able to regroup, she informs Isaac that several Porters have been murdered, and their mutual associate, Doctor Nidhi Shah, has been abducted. In addition to this, Johannes Gutenberg is missing. Thrown back into the field, Isaac must work with Lena to discover who is behind the slayings, recover Doctor Shah, and uncover Gutenberg's fate.

This was a fun and engaging story, and anyone with a love of books will instantly sympathize with how libriomancy uses that love to allow access to the book's contents. Most of the rules for libriomancy were logical, but a few felt like they were a tad too arbitrary, made up solely to let the plot happen in the way that it needed to. While magic is not limited to only libriomancy in this urban fantasy tale, it is Isaac's focus, and he slings healing potions, charms, and famous swords out of books from Alice in Wonderland to Starship Troopers. The author incorporates a great variety of science fiction and fantasy books, most familiar to me, some that were not, and others that were made up for this novel.

The book is sprinkled with humor as well, and the plot threads came together nicely at the conclusion, while still leaving enough mystery for further development. I loved the interplay between the characters - Isaac, Lena, Doctor Shah, and Smudge were all portrayed with enough detail and emotion that I could almost pull them out of the pages myself.

Libriomancer is the first book in the Magic Ex Libris series. The second book will be Codex Born, but I have no information on a release date.
Posted by Ann Wilkes at 7:13 PM

Update - the next book will be released in August 2013.