Windrider is full of delicious conflict 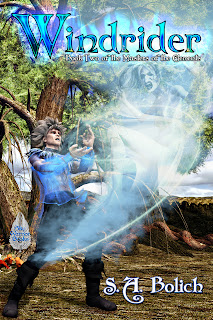 Windrider is the second volume in the Masters of the Elements series by S. A. Bolich, an entertaining and refreshing brand of fantasy. The novel takes the reader back to the land of Metrenna, where the powers of fire, wind, water and earth both threaten and sustain the land through their separate aspects. In the first book, Firedancer, we were introduced to Jetta ak'Kal and her struggle to keep the Ancient, the malevolent face of Old Man Fire, from destroying her newfound home in the mountainous territory of Annam Vale. In the second book, our narrator changes to Sheshan ak'Kal, windrider of the third rank, and pledged lifemate of Jetta.

All is peaceful in Annam Vale until a Messenger arrives. Driven by urgency, he fails to yield and causes an accident on the road. The Ancient takes this opportunity to strike, and Jetta, her Firedancer partner Settak and the other inhabitants of Annam Vale work to squelch the flames. The Messenger lays grievously wounded but will only speak his message to Wyth, head of the windrider clan. Wyth refuses to hear the message, and the Messenger dies unheard.

Soon enough, Wyth reveals that he has already received one message from the Storm Council and that the Messenger had likely been sent to demand his answer. The Ancient and the Hag, Metrenna's dangerous personified Fire and Wind have become unpredictable and unresponsive to the usual containment methods. Word has spread of how the firedancers and windriders of Annam Vale worked together to thwart the fires of the Ancient. Wyth decides that Clan Heshth cannot remain isolated in Annam Vale, and his clan, as well as Jetta and Settak, set out to speak with the Storm Council in distant Oppanum.

Sheshan is reluctant to face the outside world. The tempest that destroyed most of his clan and his first lifemate left him scarred in many ways. In the events of the first book, he learned to find purpose again in the defense of Annam Vale's gentle inhabitants, and love again with Jetta. But he is still unable to interact with the Wind through song, wrestling it with his will alone. Before leaving Annam Vale with the rest of his clan, he challenges the Hag, shrieking at the cruel sister to Wind. Anger drives this rash act, and the voice of the Hag stays with him, taunting him as he travels through the lowlands with Clan Heshth.

As the windriders and their companions travel, they discover that much of the world has suffered from the depredations of the untamed elements. Sheshan must fight against his own doubts, the Hag, and the prejudices of others, as well as strife in his relationship with Jetta. All these conflicts come together in an outstanding climax that makes an excellent conclusion to a middle volume while leaving enough questions remaining that readers will be eagerly awaiting the last book in the trilogy.

Those readers familiar with the first book will be swept into this second volume, and even newcomers should be able to quickly get their bearings with the series. The strongest aspects are the brilliant characters and the fascinating cultures of Metrenna. It was nice to see the characters travel out of Annam Vale so that we had a view of the rest of the land and its people. The only criticism that I will raise is that I felt like the focus of the plot drifted in the middle of the book. This was not enough of a problem to bother me much, as the characters and their problems kept my interest.

The third book, Seaborn, has no release date at this time.

Editor's note:
This review is very timely because I wanted to write to tell you about my friend Sue (S. A. Bolich) and why you should read her work. I've known her for probably five years now and have read a lot of her short stories when I was in the online critique group, Other Worlds Writers Workshop, that she co-founded in 1998. Her rough drafts look like my finals. And her descriptions are more vivid than any I've read. She doesn't waste words and chooses them with care.

Now she needs care. The cancer she had been told was defeated ten years ago has returned, going into her lungs and bones now. Nobody writes because they think they will get rich or even live comfortably doing so. We write because we must. It's our passion. Unless we hit the bestseller lists time and time again, we will struggle financially. Sue has health insurance, but it's a high-deductible plan that are the only ones, as self-employed writers, most of us can afford. Some don't even have that.

I encourage you to buy this series of books. You'll be doing yourself a favor, while also helping a struggling writer -- at least with the bills. Cancer isn't the automatic death sentence it once was, but the treatments don't come cheap and are mostly unpleasant. And often far away - made worse by the price of gas and the taxing trip home.

Please read the Clare's review of Firedancer and my interview with Sue herein.

This holiday season, consider purchasing a gift that will keep on giving. And make one struggling writer's life a little easier. Buy S. A. Bolich's books here. There's even a facebook page dedicated to the cause.

Loved Firedancer, completely forgot the second one had come out! On it.