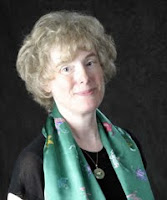 I had the opportunity to interview my fellow writer and club member, Laurel Anne Hill, at RadCon in February. I thoroughly enjoyed our chat. Because of technical difficulties, I created an article rather than a straight interview. I love interviewing people, but hate transcription, so this may be the last of its kind. Enjoy.

Laurel Anne Hill started writing before she could read. "My sister was older than I by four years and I would tell her my stories and she would write them down. And then I'd cut out little pictures from magazines and comic books to illustrate the stories that she had written and so that's when it all began. And I think really she encouraged me because she liked to write, too.

"I got to my teens and I started what I think of as more grown-up writing, essays and stories that weren't quite so cliché and childish. And I started entering them in contests. I had mentors in high school and I kept winning contests."

Laurel paid for four years of college tuition with writing contest winnings. She won a cash prize and a full-sized $600 stereo from a writing contest conducted by a military group out of the Presidio (San Francisco). She won a watch. For one of her essays, she won $500 which covered her tuition for many semesters.

When it comes to entry fees, Laurel advises writers to look at who is sponsoring the contest, what the prizes are, what kind of exposure winners get, etc. She said a small fee is reasonable for covering administrative costs of a contest. She suggested giving yourself a limit of how much you will spend for contests per year.

After college, Laurel stopped writing in lieu of a career and raising children. In 1991, a mysterious illness assailed her, which was never identified. "The muscles in my back went into continual spasm. It lasted almost six weeks. ... After I recovered from that, I looked at life in a different way. You know, they had me on several medications that made me hallucinate. Usually when I hallucinate, I hallucinate spiders; but in this case I could envision the grim reaper. But instead of holding a scythe, he was holding a giant pen." This drove her to get back to writing.

Laurel had recurring dreams that she was going back to college and taking courses in literature. In these dreams, she would sign up for the courses and then be unable to attend because she couldn't find parking, the professor moved the class to another city and other various obstacles.

In another recurring dream, she had to return to high school because her diploma and records had been lost. Once again, the standard dream obstacles. When she started writing and working with youth, those dreams ceased.

Laurel was fascinated with the worlds in the books she had as a child. She cited a favorite story in which a carrousel horse could communicate with children, but only until their legs were long enough to fit into the stirrups of its saddle.

Though her career had been in science, Laurel loves to create her own worlds with her own rules and scientific laws.

Laurel belongs to a number of writing groups and encourages others, including younger writers who are no longer in writing courses to do the same. Her affiliations include Broad Universe, California Writers' Club, Women Writing the Web and Women's National Book Association. She has been in critique groups for 12 or 13 years, one of which she has been in for 8 or 9 years.

Because she believes in giving back, she now sits on the mentor side of the table for writers' workshops at sci-fi conventions, especially BayCon.

When I asked Laurel what themes run through her work, she said, "There are things that are rewarded in life (honor, faith, love). I guess I have a very optimistic viewpoint about life regardless of what I've been through. Which is odd since I grew up in a poor family with an alcoholic father and had a brother that did not turn out well. Yet I continually have this feeling that there's hope for almost all of us."

Read more about Laurel and her writing at www.laurelannehill.com.

A fascinating story. I love reading how other writers started. Thanks for sharing.