Steve Hockensmith - crossing genres and mashing it up 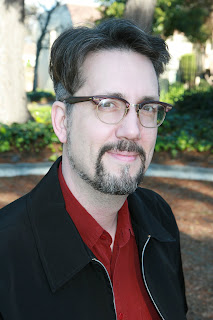 Steve Hockensmith spoke at the Redwood Writers conference I presented at in October. I was impressed by a lot of things he had to say in his keynote speech. I subsequently received an offer of Dawn of the Dreadfuls from the publisher. I didn't even look at the author's name. Dawn of the Dreadfuls sounded like great fun. Discovering that it was written by Steve was a bonus.

Steve's other books have been more western/slash mystery, but they all have one thing in common: his unstoppable wit. Anyone who can be so consistently, and seemingly effortlessly funny, is aces with me.

Read more about Steve on his blog/website and you simply MUST watch the book trailer. Where do I sign up for these? It's fabulous! My review of Dawn of the Dreadfuls is available at Mostly Fiction.

AW: How did you arrive at the idea of melding zombies with a Jane Austen classic?

SH: The person who deserves all the credit is Jason Rekulak, an editor at Quirk Books in Philadelphia. He was the one who had the brainstorm: “Hey, wouldn’t it be cool if we took a public domain classic and threw monsters into it?” I’m just glad he decided to start with Pride and Prejudice and Zombies and not War and Peace and Sasquatch or something. The Austen/zombies combo really was a stroke of genius. I’m lucky that Seth Grahame-Smith did such a good job with the first book, too, because if that hadn’t been a worldwide phenomenon, Jason wouldn’t have wanted a prequel...and I would’ve missed out on the gig!

AW: How many books have you written so far and in what genres?

SH: Pride and Prejudice and Zombies: Dawn of the Dreadfuls is my fifth published novel. The previous four are all in my “Holmes on the Range” mystery series. They’re whodunnits about a couple of 1890s cowboys who set out to solve mysteries using the methods of their hero, Sherlock Holmes. I’ve got one more horror/comedy coming up (which I’m not allowed to say more about, at the moment) as well as another “Holmes on the Range” novel, then I’m not sure what the future holds. Hopefully, more of everything: I’d love to try my hand at every genre under the sun!

AW: What's your favorite genre to write in? To read?

SH: I had more fun doing Dawn of the Dreadfuls than anything else I’ve ever written, which was a surprise. I thought I’d feel a lot of pressure, and I wasn’t a huge horror fan before, yet that book was a blast. Maybe I just needed a change of pace, since I’d done four “Holmes on the Range” books in a row. I grew up loving science fiction, yet I never got the hang of it as a writer. I’d really like to give that another shot, one of these days. As for my reading, I’m all over the map. I dabble in mystery, SF, fantasy, and “literary” fiction while mixing in a lot of non-fiction, as well. I say “dabble” because I’m a very slow reader -- I probably only get through 14 or 15 books a year. So while I haven’t read deeply in any particular field, I have read broadly...which I hope counts for something.

AW: Can you share with my readers about your wall of inspiration and achievement?

SH: Well, looking up from my computer monitor, the first thing I see are the reference materials for my latest Work In Progress. But right above all that is a shelf containing every bit of fiction I’ve published professionally: not just my novels, but the magazines and anthologies I’ve appeared in, as well. Whenever I feel like a phony, I can just look up there and see physical proof that I’ve accomplished something. Just to the left of all that are reminders of the things that inspired me as a kid (a Raiders of the Lost Ark poster, a DC Comics calendar), while to the right is an advertisement for an early ’90s exhibit at the Museum of Modern Art called “High and Low: Modern Art and Popular Culture.” That reminds me what I’m trying to produce -- pop entertainment with (hopefully) something interesting or offbeat mixed in. On the wall directly behind me, meanwhile, are all my award nomination certificates. So if I’m feeling really low, I can just spin around and say, “Hey...I was a finalist for the Edgar Award, dammit!”

AW: I really enjoyed your keynote at the Redwood Writers Conference. Have you always been a good public speaker, or did you have to work at it?

SH: Thanks! I enjoy doing speeches and workshops, but I’m always terrified beforehand. It comes pretty naturally to me once I’m up there, though. I know I have my weaknesses as a public speaker, but the trick I’ve learned is not to care. As long as you’re comfortable at the microphone and project an aura of friendliness and fun, folks will cut you a lot of slack.

AW: How important is it for an author to make public appearances? How has it helped your career?

SH: Good question...and one that’s hard to answer. Are public appearances vital? No. Can they help? Yes. I’ve attended a lot of mystery conventions over the years, and doing panels at those kinds of events has helped me connect with many, many readers. Enough to make me a bestseller, though? Not by a long shot. And my experience with bookstore signings has been extremely spotty. Sometimes the place is packed, sometimes I end up chatting with the store staff until it becomes obvious no one’s going to show up. But even when it’s the latter, that can be helpful, in some small way. At least you end up with signed copies on the shelves, and the people who work there know you...and maybe even feel sorry for you! It can’t hurt -- which is, I guess, my bottom line when it comes to public appearances.

AW: Awesome book trailer! How much involvement did you have with that process? Has it measurably boosted sales?

SH: Thank you! It is pretty cool, isn’t it? My involvement was limited to getting an e-mail telling me the publisher was having a trailer made. Oh, and then linking to the trailer from my site once it was on YouTube. That’s it! It’s hard to say if it’s boosted sales, but I know it made a splash when it was first showed up on the Internet, and that counts for something.

AW: In which order do you recommend reading the Pride and Prejudice and Zombies series?

SH: The nice thing about Dawn of the Dreadfuls is you can read it either before or after Pride and Prejudice and Zombies. Either you know the characters and the set-up already, so the prequel fills in interesting back story and answers questions you might have had, or you don’t know anything about the premise at all, in which case you can watch the story unfold from the very beginning. Hopefully, it works either way.

AW: What are you writing now?

SH: Funny you should ask! I just e-mailed my editor the second draft of my next “Holmes on the Range” novel. It’s called World’s Greatest Sleuth! and it should be out in early 2011. After that, it’s on to the top secret horror project, which will carry me through to the end of the year. So my plate is full, as they say. Heaping, even. That can be a little stressful, at times, but I infinitely prefer it to the alternative!