Clare and I go way back at OWWW. That's Other World's Writer's Workshop. If you haven't checked them out, you should. In addition to a great SF/F critique group, the site overflows with wonderful writing resources. They also offer classes. Go explore after reading Clare's review.
Clare L. Deming lives in New Jersey where she spends her nights working as an emergency veterinarian. During the day she writes science fiction and fantasy, while trying to keep five cats off the keyboard. Her writing has appeared in A Fly in Amber e-zine and medical publications. Clare is a member of the Other Worlds Writers Workshop and the Science Fiction Association of Bergen County. Other interests that fill her days include fencing, flying and snowboarding. 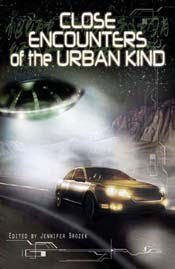 In Close Encounters of the Urban Kind, editor Jennifer Brozek has put together a collection of short stories in which urban legends are explained by alien encounters. The level of explanation varies, as do the types of aliens involved. Many of the urban legends used as inspiration for the tales are well-known, others are local phenomena, while some are new legends created by the authors. I thought it interesting that alien explanations for urban legends are not more common after reading Close Encounters of the Urban Kind.

A short note from the author follows each of the twenty stories explaining the urban legend within. I found this useful for those legends with which I was not familiar. As Jennifer Brozek states in the foreword, the aliens' motivations and the reasons behind their actions are unknown to us in the early stories. Later in the collection, we are offered more explanation and greater interaction between the humans and those other beings. At the end of the volume, there are biographies for all the authors. I have highlighted some of my favorite stories below:

While many people apparently have a fear of clowns, I had thought I was immune. In this first story, Jenny, the babysitter, has an easy time until Domenic, one of her young charges, asks her to cover a black and white clown doll with a blanket so that he can go to sleep. After the terrifying events that ensue, I will never look at clowns the same way.

In this story, Jennifer Pelland relates the misfortunes of three high school students in search of alcohol and entertainment on a dark New England night. The "bad boy" of the group drives with the headlights off, waiting for another car to flash its lights at them. This echoes the urban legend of a gang initiation ritual in which the prospective member shoots the first person to flash their lights in such a way. Things do not go as planned, and I found the ending gratifyingly unpredictable and creepy.

"Frames of Reference" by Nathan Crowder

Do you remember the alien autopsy that was on television some years ago? This story relates the legend of snuff films to the treatment of aliens in movies and television. Greg is hired to examine an unusual film, but discovers that the truth is out there, and they're not happy about it.

"Two Out, Wendigo" by Rosemary Jones

This was a nice change of pace and setting, using the midwestern wendigo to explain the Chicago Cubs' failure to win the World Series. The story is set in the first half of the twentieth century and follows a nurse, Josephina, whose father had taught her how to recognize a wendigo before he died. When she finds that one has entered the hospital where she works, she flees as her dad had instructed her. Yet, she knows this is no solution, and she must find a way to contain the monster.

Rick Silva's offering opens with a man counting road kill and trying to identify each species as he drives down an empty road. Distracted by thoughts of a recent fight with his girlfriend, he accidentally runs over a box and stops to see what he hit. What he finds is disturbingly alien and mimics an urban legend in which small children hiding in a pile of autumn leaves are run over by a swerving car.

This tale combines the New York state legend of Masty Huba, a bogeyman based on a real drifter, with an unfriendly version of E.T. who is trying to find its way home. When Devon's son goes missing, he searches for him in the sewer pipes where he had encountered Mastihooba as a boy. The descriptions are colorful and all the details come together for a satisfying conclusion.

In another change of setting, "Dead Letter Drop" takes place in post-war Berlin. We follow a starving girl through her daily struggle for food and safety. She encounters a blind old man who asks her to deliver a letter for him, with a possible reward of food. The result of her trip is not what you would expect, and the urban legend behind the resolution of the tale is disturbing, yet intriguing.

Before beginning this book, I was concerned that an anthology with such a specific theme might grow predictable and redundant. I knew that an extraterrestrial explanation would underlie whatever strange or frightening myth began each story. Yet, I enjoyed how each author took the overall theme and twisted it in their own unique way. Each successive story retained my interest, and I found myself eager to discover those urban legends that were new to me. I would recommend this collection particularly to readers that love tales of aliens among us, unexplained disappearances, or those ghost stories told around the campfire when we were children.