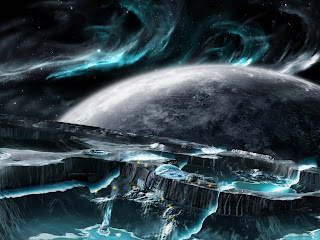 This week the news feeds are all about the great Chilean rescue of the miners, who have been trapped a kilometer underground for several weeks. This is a great human interest story with an outstanding ending. Yet what is being referred to in many articles as the “miracle rescue” might also be considered a testament to the limitations of our technology, at least as far as penetrating terra firma is concerned. The miners’ stories will no doubt be full of inspiration, once we get to hear them ... which is once they all decide which media outlets will pay the most to hear their tales.

The whole situation reminded me of just how many great stories and films have been done with miners as characters and mines as a setting. The Video Hound's Movie List of films with or about miners and mining has literally pages of such movies.

On the Science Fiction movie front, there is the biggest box office smash of recent history. What was Avatar if not a big mining SF movie? (OK, some might say it is also a big whining SF movie, too, but I still loved it, thin story, heavy-handed message, and all.) There are lots of other examples of SF movies with a mining theme or at least a mining environment, including but absolutely not limited to Moon 44, Star Trek VI: The Undiscovered Country, The Abyss, and one of my personal favorites, Outland. I know a lot of people nitpicked Outland to death for its ready defiance of several of the laws of physics, but hey, it had Sean Connery! In similar company, another hit movie of recent years which also included miners was Armageddon. Of course oil drillers are miners. And they are still miners when they are drilling on a giant rock flying towards Earth at ridiculous speeds. I regard the scene with space-happy super-brain geologist Rockhound (Steve Buscemi) shooting up the drill site with a big space Gatling gun as one of the funniest, most preposterous SF movie scenes of the last twenty years. Outrageous fun, if you don't demand that your SF come exclusively in credible packaging.

Dozens of science fiction television episodes featuring mining and miners have also made their appearance. Classic Star Trek had several of them, including "The Devil in the Dark" (written by Gene L. Coon), "The Cloudminders" (written by Margaret Armen), and "Mudd's Women" (witten by Steven Kandel). Even Red Dwarf, home to the last human alive, was a mining ship.

More recent and arguably more artistically engineered movies such as the 2009 Moon, (story/direction by Duncan Jones, screenplay by Nathan Parker) come closer to grips with some of the core issues that make mining such a rich landscape we can mine for story. (Sorry, I couldn't resist). Whether the underlying theme is isolation, human vs. hostile environment, individual safety vs. corporate greed, environmental responsibility vs. corporate greed, etc., there’s lots to work with here.

Written SF has also paid due homage to mining as an extreme setting, a hostile environment, a challenge, for person and machine, and for the machined creature as well. An article from Technovelgy.com reminded me of this, the notion of the engineered miner, who is not human. The article mentions Love Among the Robots, Emmett McDowells' 1946 story of mining worms, and Larry Niven's 1968 A Gift from Earth, yet another mining worm story. And of course there is the original Dune, Frank Herbert's story of mining for stuff from worms (because what is the Spice Melange, if not worm doodoo?).

There are dozens more great SF stories and novels where miners and mining play a significant role. I believe that this trend will continue throughout the life of science fiction because of the nature of the universe, of which the nature of mining is a microcosm. So long as there are substances with unique, valuable properties, which are difficult to create or obtain, there will be some group of women, men, and machines ready to seek those substances. For reasons of personal profit, family survival, or mere satisfaction, they will push the barriers of technology and the human spirit and, perhaps, the boundaries of ecological responsibility, to acquire, possess, process, and sell these magic materials. And in so doing, they will inspire future writers.

Trolling the Venusian Atmosphere - It's a Drag

An interesting Gizmag article on some ingenious applications of physics and adaption of sensory gear originally designed for other purposes.

U of C Santa Cruz astronomy professor speculates on the chance of life on a recently discovered planet.

(Thanks to conspiracy collector Aaagghhh for the link)

(Thanks to game coding guru QwazyWabbit for the link)

This year's Life Achievement winners to be awarded at the WFC are Brian Lumley, Terry Pratchett, and Peter Straub.

Great post. Gosh, you're so right. science fiction is full of mining stories. :)