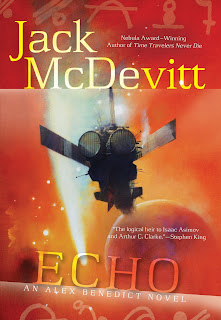 In Jack McDevitt's Echo, readers are introduced while fans are re-introduced to the characters of Alex Benedict and Chase Kolpath in their fifth adventure together. As a dealer in antiquities, Alex Benedict often comes across mysterious objects, peculiar clients, and dangerous foes. His business, Rainbow Enterprises, hooks sellers and buyers up to a mutual advantage, taking a cut of the profits.

When Alex discovers an online listing for a stone tablet engraved with runes in an unfamiliar, possibly extraterrestrial, language, he decides to investigate. The former owner, Alex learns, was Somerset "Sunset" Tuttle, an eccentric archaeologist and anthropologist, whose life's goal was to search out intelligent extraterrestrial life. When humans had initially colonized star systems across our arm of the galaxy eight thousand years ago, many colonies lost contact with the rest of civilization, suffered disease or catastrophe, and are now the subject of all modern day archaeological studies.

Only one intelligent life form, the telepathic Ashiyyur (Mutes), had been discovered. Tuttle had risked his professional reputation on his obsessive search for other intelligent aliens, and was remembered by most in his field as a single-minded kook. His ultimate failure brought him ridicule as he continued to lecture on the importance of his search up until his premature death. If this mysterious tablet had been evidence of an alien civilization, why would Somerset Tuttle have kept this knowledge a secret?

When Alex's assistant, Chase Kolpath, arrives at Tuttle's former residence to retrieve the tablet someone else has beaten them to it. Through further sleuth-work, they track down the culprit -- Doug Bannister, a young man with no apparent connection to Tuttle. After Alex and Chase corner Doug, Doug's wife reveals that he took it as a favor for his aunt, Rachel Bannister.

Oddly, Doug claims Rachel subsequently decided she no longer desired the artifact and had him drop it in the river. The river search is as fruitless as all their previous leads seem to be. Then Chase learns Rachel Bannister and Tuttle were romantically involved. The more they learn about Rachel and World's End Tours, where Rachel quit her interstellar piloting job, the more the mysteries deepen. And Rachel refuses to assist them.

Did the tablet hold an alien secret so terrible that even Tuttle would not reveal it? Before Chase and Alex can continue their investigation, an attempt is made on their lives, convincing Alex that the tablet's secrets are too important to ignore. He and Chase retrace the path of Tuttle's explorations and Rachel's last tour, which puts their business, their friendship, their lives, and even humanity's role in the cosmos in jeopardy.

I had no trouble jumping into this story, even never having read any Alex Benedict novels. Each book in the series encompasses a single mystery and problem to solve, so reading the previous volumes is not critical to the understanding of each subsequent one. The third book, Seeker (2005), won a Nebula award. McDevitt reveals most of the important aspects of this future world without interrupting his brisk pacing.

Echo is told from the point-of-view of Chase Kolpath, which follows the traditional structure of a detective novel, so that when Alex solves Tuttle and Rachel's terrible secret, the reader is kept guessing until Chase catches up with him. The personality differences between Alex and Chase in terms of their goals and ambitions also added to the tension in the novel.

The only subject I felt needed more attention was the Mutes, though I gather their discovery is the subject of the first Alex Benedict novel.

As the stakes continuously escalated, I found myself reading until I had finished the final one hundred pages in one late-night sitting. That rush of story-reading glee makes me thirst for more, and I plan on looking for the earlier volumes sometime soon.
Posted by Ann Wilkes at 7:39 AM