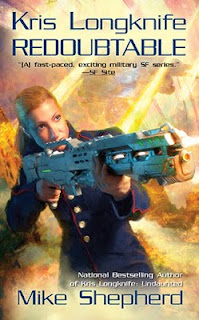 In a spirited and fun science fiction romp, Mike Shepherd takes us along with Princess Kris Longknife and her troop of marines in a hunt for space pirates. Don't worry - despite the noble title, Kris is no coddled damsel. Recently promoted to Lieutenant Commander, she is there to get a job done - one that usually involves explosives, bullets, subterfuge, and political wrangling.

Kris Longknife: Redoubtable is the eighth volume in the series of this plucky princess' adventures. After dispatching an amateur pirate raid on her ship, Kris leads her marines onto the planet of Kaskatos, where an over-the-top sadistic leader has enslaved the locals with her band of ruthless henchmen. If the novel merely covered the conflict with this ridiculous overlord, I may have been disappointed. However, the situation on Kaskatos is rapidly controlled, while the enemy meets an appropriately inglorious end.

Just as Kris begins to organize the reestablishment of vital services on Kaskatos, Kris' nemesis Lieutenant Victoria Peterwald, heiress of a rival empire , summons her to a meeting. With Kaskatos located on the periphery of the Peterwald's empire, Kris has already grown concerned that her humanitarian efforts would be construed as a takeover of the planet. However, the meeting reveals that there are larger problems looming within the Peterwald empire. Never quite sure who to trust, Kris delves deeper into the pirate problem, trying to track down their ultimate base, while continuing to negotiate with Victoria. When the pirates kidnap the twelve-year-old daughter of one of the crew, the stakes become more personal and desperate for Kris.

As a newcomer to this series, I initially had trouble following the chain-of-command, with marines, navy, and "civilians" all present on one ship. However, it turns out that this assortment of personnel confuses Kris also. While Kris has her own ideas about their purpose, I suspect that they may become important in future volumes.

While the eighth volume can certainly stand alone, this is an open-ended series. Someone - or something - is lurking on the edge of known space, and they don't seem friendly. Unknown to Victoria Peterwald, Kris has secretly communicated with the alien Iteeche and is itching to investigate some jump points that have consumed recent Iteeche scout ships. This larger overarching plot began prior to this book, and while it is not advanced much here, I think this volume is a bridge that puts everyone in place to explore this mystery in a future installment.

Despite the fighting, kidnapping, and sinister mysteries, I found this book to be fun and light, with quite a few lines and scenes that made me chuckle. Though lacking in speculative ideas and innovative fictional technologies that fill some science fiction worlds, I cared about the characters and the pacing never foundered. Overall, this was an exciting and enjoyable book.