My Worldcon blog report is about the Broads (Broad Universe members) who made it so special - at least for me. This was my first Worldcon so I can't compare it to others for you, nor can I tell you much about the scheduled events. I had a ball at Worldcon, but did it mostly outside of the box. I only hit a couple panels and no other scheduled events - unless you count book launches and room parties.

To me, Worldcon was about the people. Where else can I see so many marvelous sci-fi writers all in one place? I met many authors whom I had only met virtually and caught up with old friends. I arrived in Reno late Wednesday afternoon and spent the evening with my cousin who so graciously put me up and put up with me coming in late at night. She lives way out in the country with the cottontails and the quail. And the sage brush - echew!

Thursday I went to breakfast with her and her husband and experienced a first. I ordered tea. I have to say the abysmal lack of good tea or even tea water was certainly the worst thing that happened at Worldcon. The waitress brought the generic restaurant tea along with a pot of ... air. How did she not notice how light it was? The food for the Worldcon green room did not include water for tea until I made a small stink. Still, they insisted to the contracted caterers that we just wanted to drink hot water so they wouldn't have to pay the exorbitant price for the cardboard dust they call tea. The last day, someone snuck in some Twinings. Now that's more civilized. But, again, the pot was dry. Grrrr. I hate coffee. Can't pay me to drink the stuff. But get between me and my tea and there'll be trouble. I drink the hard stuff at home. PG Tips, baby. I even carry Bigelow tea bags in my purse as a Lipton defense. That was much more than you needed to know about my tea habits, but I feel better. ;)

Friday morning started early with a 7AM Broad Universe breakfast at a casino restaurant. How great to meet so many Broads face to face! Karina Fabian went around the three tables recording video interviews with all of us. I expect that is posted somewhere or will be soon. I'll drop the link in later.

Next, it was off to the very well-attended Broad Universe Rapid Fire Reading. I ran a tight ship and 12 ladies were able to read from their work before we had to clear the room. The response was super and many listeners headed to the dealers room to buy our books.

Next up for me was the book launch of Defending the Future IV: No Man's Land with Brenda Cooper, S.A. Bolich and Jennifer Brozek. That was less well-attended, but went very well. Of the ladies I read with Jennifer's was the only story I hadn't read yet. Now I'm anxious to read it, too.

Corie Ralston shared her Speculative Literature Foundation booth with Broad Universe in the dealers room. I have to say that I sold more books than ever at a con and I'm sure it was because of the exposure afforded by the boutique table versus trying to sell books wedged in with a zillion other titles at a bookseller's table. I got a kick out of volunteering there, too. Here is S.A. Bolich and Ann Gimpel taking their turn. 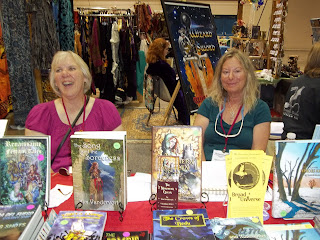 And here I am with Corie (far left), Karina Fabian and S.A. Bolich. 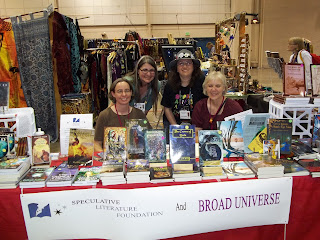 Friday night I attended Brenda Cooper (Mayan December) and Louise Marley's (The Brahms Deception) joint book launch. They're both Broads, as I've mentioned before. Louise sold out and Brenda was well into her second box when I stopped back by toward the end of the evening.

And here is Allen M. Steele at the Asimov/Analog room party cutting the Asimov cakes with the cover featuring his story. 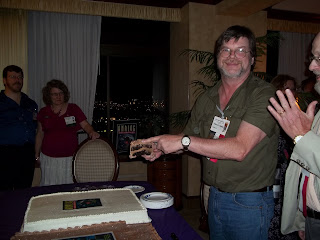 Incidentally, Allen won a Hugo Saturday night for his novelette "The Emperor of Mars". Read all the Hugo results at Tor.com now. AND, my next con is Conjecture in San Diego where he is Guest of Honor.

Read more Worldcon reports by perusing my blogroll to the right.

Now I know why zombies are so popular. That's what sci-fi writers turn into after a five-day con. Write what you know...

This was my first time doing a lot of videos of people and while the interviewing was easy, the uploading is being a bear! I'll get them up...eventually! Good thing nothing was particularly time-sensitive!

I so enjoyed meeting you and getting to know you!

Worldcon rule - this Sci-Fi review may be of interest mate - http://www.comicbookandmoviereviews.com/2011/08/blade-runner.html