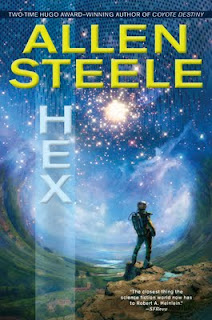 
Steele has opened a whole new delightfully alien can of worms with Hex. What's not to like about a Dyson sphere, an inhabitable, hollow sphere surrounding a star? And how could it be more interesting? Steele's answer is to have numerous alien cultures each have its own "world" within.

The story begins with bored, veteran space captain (Andromeda Carson) who's given the job of forward scout into the unknown. The Talus is an alliance of aliens that humanity belongs to after colonizing the planet Coyote. Another of the Talus races extends an invitation to humanity: Come to our star system and we'll give you a world you can live on. Sounds too good to be true. What could be the catch?

First off, current star maps don't show any planets in that system. But this is too great an opportunity to ignore. Apparently humanity was not the first race that the danuii extended this offer to and these other Talus races are already living on worlds of their own in the danuii system.

The danuii send the starbridge key to their system and the Chief of Operations for the Coyote Federation Merchant Marine Theodore Harker sends Andromeda Carson. As fate would have it the crew they assemble for her includes her own son. The one who's not talking to her.

Imagine a sphere large enough to encompass, but not be vaporized by, a star. Can you?

An entire habitat, far bigger than anything even remotely like it that humans had ever built. The great crater cities of the Moon would easily fit inside the thing, with plenty of room to spare. And this is just one, Andromeda thought. How many did Tom estimate are here? Over a trillion? She swallowed hard, feeling her heart beat against her chest. This is impossible. How could anyone build anything this big?

A low, awestruck whistle from Rolf. "That's it," he muttered. "I give up. I'm retiring. I have no business calling myself an engineer..."


Steele's strength is in his aliens and perfectly flawed humans. I enjoyed the adventure and the varied ways in which each character reacted to danger and the unknown. What I really appreciate about Hex, and what has been true for other Coyote novels I've read, is that Steele does not skimp on the alien descriptions. That keeps me reading even when I get a little annoyed at Andromeda's son Sean's petulance. The tension between the two adds another layer of conflict. And mother and son are each other's kryptonite.

The adventure on Hex has only just begun I'm sure. There must be ways for things to get nasty and out of control. I'm eager to find out more. Maybe I can pry a tidbit or two out of him at Conjecture (He's the GOH). ;)