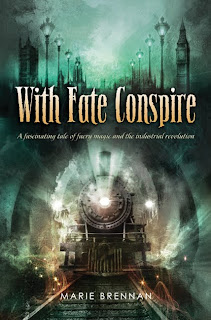 The first thing that grabbed me about With Fate Conspire by Marie Brennan was the cover of eerie green and black. A train rushes out from the artwork, beneath the gaslamps of a London street, all suffused with shadows and sparkling wisps of power. This is a Victorian novel set in 1884 during the industrial revolution when the city of London is being riddled with tunnels for the expanding network of railroads. This is an immediate threat to the Onyx Court, an underground (literally and figuratively) faerie realm, for iron is poison to the fae.

This is the fourth book in the Onyx Court series, and I had little trouble jumping into it not having read the previous volumes. The plot follows two main characters. Dead Rick is a skriker - a faerie were-dog based upon the black dog myth of the British Isles. His memories have been stolen by unknown means, and he has been enslaved by Nadrett, one of the crime bosses of the Goblin Market. For as the Onyx Court is weakened by encroaching industrialism, other powers have risen up to take advantage of this vacancy for whatever profit they can squeeze from the failing realm.

Dead Rick is a sneaky and devious creature, however. He hoards bread (which can protect a faerie when tithed by mortals), searches for clues about his missing memories and tries to devise a means to escape the Onyx Court before it is destroyed.

Eliza O'Malley is a young Irishwoman on the streets of London who has fled her home turf on the other side of town. Scotland Yard wants to question her about a bombing, but she was only in the area of the blast because she was following a group of faeries. Of course, who would believe that story? Eliza has been tracking rumors of faeries since her childhood sweetheart, Owen, was stolen by them seven years ago.

When she finds an announcement for a meeting of the London Fairy Society, Eliza has to figure out how to attend, for a low-class miscreant cannot expect to be welcome among any type of proper society. Through forgery and subterfuge, she gains a position as a houseservant to one of the Fairy Society's younger members, but faerie mischief ensues, and Eliza struggles to avoid the attention of the authorities while tracking down the fae.

I loved the way that industrial London was merged with the underground Onyx Court, and the overall atmosphere of failing empire amidst progress that Ms. Brennan has created in this book. The Queen of the Onyx Court has not been seen in years and her Prince is weakened and struggling with even basic tasks. There is even a group of faerie scientists that are trying to discover a way to save the Court with fanciful devices reminiscent of steampunk, but without the steam.

Eliza's narrative drew me in most strongly, perhaps because her human concerns were more tangible to me. I have not read any previous Onyx Court novels, so it did take me a little while to orient myself with those aspects of the story. The plot moved steadily to a conclusion that brought all of the smaller details together nicely. I only wish that I was more familiar with London personally, because I think I would have taken more away from this book in that case. It is clear that Ms. Brennan has done quite a bit of research so that the historic details of place and society feel correct.
Posted by Ann Wilkes at 4:11 PM