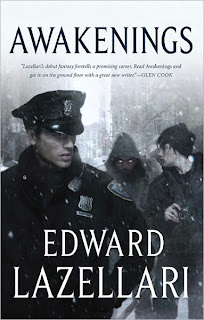 
Awakenings is the debut novel by Edward Lazellari, and although it is filled with many classic fantasy elements, it approaches these in a unique way. Cal MacDonnell is a policeman in New York City, happily married, with a five-year-old daughter and another child on the way. However, his life is marred by frightening and sad dreams and the amnesia he suffers. He cannot remember anything prior to thirteen years ago, when he was found inexplicably wandering in a field. Even so, his life has been otherwise normal and there is little to suggest the truth about his forgotten past.

On a routine nighttime call, Cal and his partner pursue a suspect only to fall into an ambush by a troll, a giant, and a vicious swordsman. Faced with these impossible monsters, he begins to remember pieces of his shattered past. Cal is a reluctant hero, and as he learns more about his memories, they bring him into conflict with the new life he has established since his amnesia. Even his wife and child may stand in the way of his former life's goals, but as he remembers his true identity, he cannot completely resist those older responsibilities.

There are several plot lines in this book, and the second most important one is that of Seth Raincrest, a down-on-his-luck photographer with an abrasive disposition who became my favorite character of the bunch. Seth's problems begin when an eccentric and beautiful woman arrives at his apartment. She claims that they went to school together, but Seth has the same problem as Cal - he has no memory of anything prior to a fire that killed his parents thirteen years ago. Irritated, but also intrigued, Seth goes along with the woman, Lelani, and this soon brings them to the rescue of Cal and his wife and child.

The final two storylines follow the antagonist, Dorn, and a teenager in foster care, Daniel. All these different plot threads are woven together a bit at a time until a picture of the entire situation starts to emerge. The manner in which this story is approached is unique. I mean at its heart, it really is a tale in which the succession of an alternate world fantasy kingdom is in dispute. However, by looking at things from our world, from the point-of-view of characters that have lost all memories of the situation there, it lends the trope a fresh perspective.

The antagonists are ruthless and terrifying and have the advantage that they know who they are and why they need to act. However, they were ill-prepared to travel to our world, while Cal and Seth have lived here for thirteen years. I liked the way the truth emerged to Cal and Seth, and I also felt like they acted in a realistic fashion for people who have had their lives thrust into such chaos.

I enjoyed most of this book, but by the time I neared the end, it was obvious that this was only the first book in a series. I had hoped to see Daniel's storyline merge with the rest, and it never did. His story felt isolated by this, but from the rest of the book I can easily see where he fits in. The action did lead up to a pivotal confrontation at the end, with particularly interesting magic, but just don't expect too much to be resolved at the conclusion. That being said, this was a fun book and I'll be looking out for information on when the next volume will be available.