Dorm life in The Highest Frontier 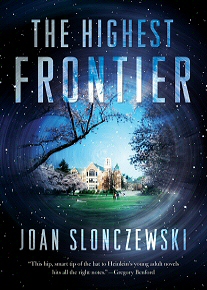 Jennifer Ramos Kennedy is descended from American Presidents in a world where “ultra” is the new kudzu.  Left emotionally damaged by the sudden death of her twin brother, and despite a congenital abnormality that left her unable to speak in public, she has a straight A+++ average,  is an award-winning young scientist, and a volunteer who works both as an EMS and with Homeland Security dealing with everyday incursions of ultra.  As the book opens, Jenny is preparing to go to Frontera, a university on a space station circling the Earth.

Ultraphytes are an alien menace, a life form that crash-landed in the great salt flats of Utah, and which grows and mutates fast.  When stressed, it emits cyanide, killing things—and people.  Between ultra and global warming, the Earth is in trouble.  Some people look to the space stations for a safe escape from the troubles of Earth.  Others seek religious freedom or freedom from Earth’s gambling and morality laws.

Jenny’s father runs the North American branch of Toynet, which is the super-Internet of Jenny’s day.  People text and video-chat, vote, attend classes, experience the news, and much more in Toynet.  As they ride modified anthrax strings into space, in between frequent messages in various Toynet windows, Jenny’s parents warn her to tie her shoelaces, keep her protective HIV up to date, do her homework, play (not a typo) her taxes, and, of course, listen to the mental they installed into her Toynet diad after her twin's death to watch over her mental health.

As this interaction shows, the setting is a graceful blend of the strange new world of the future and the normal, everyday life of a college student.  Jenny is warned away from Professor Abaynesh’s Life class by an upperclassman who doesn’t know Abaynesh is already signed up as Jenny’s advisor.  Jenny ignores the advice—a good thing for the reader.  The first Life class is an adventure in itself, combining the day’s lessons with the excitement of a time-travel scavenger hunt and a roller-coaster ride on a strand of DNA.

At first, the dangers at Frontera seem limited and ordinary, despite being on a space station.  Jenny believes she has been sent here rather than to one of the larger prestigious universities on earth because she needs a safer environment than she would find there—after all, she has a chromosomal impediment to speaking in public and she was emotionally damaged by the death of her brother.  This college is run by friends of the family and the grounds are totally free of invasive species—no need to worry about ultra or catching Dengue fever again (though Jenny finds she misses kudzu).

Still, college is a challenge.  Jenny has to learn to live with a very strange roommate (another damaged rich girl), face down her advisor (and her advisor’s two-headed pets), push herself to speak to strangers, and call tech support to attend to her new residence’s Toybox.  The normal challenges of a girl having to live on her own for the first time.  But then she swats a mosquito, there is a malfunction in her lawn, and a piece of space debris blocks a portion of the power being beamed to the station, cutting off Toynet and causing a brown-out.  Suddenly Frontera University seems more like an actual frontier than a safe haven for damaged rich kids.  In the meantime, the American Presidential race is heating up.

The emotional plot is, of course, the story of Jenny’s coming-of-age.  It’s hard to give a hint of the main science-fiction plot without offering spoilers.  Nearly everything that’s happening matters, in big or small ways, to the central problem that Jenny must face and the clues to that mystery blend seamlessly into the background.  I don’t want to tell you what to look for—part of the pleasure of reading the book was figuring it out for myself.

The characters in The Highest Frontier, from Jenny’s very political family to her professors and the coterie of students that Jenny hangs out with are memorable, quirky, and real.  There’s a lot going on, with science and politics—and, of course, Jenny’s actions—affecting the outcome.  Jenny has enough skills to be a satisfying hero and enough flaws to be a believable and sympathetic college student.  The main plotlines are resolved but it is clear that, as in the real world, life goes on.  I am left wondering if there will be a sequel.
Posted by Ann Wilkes at 11:49 PM

Ann, this sounds like a good book. There definitely should be a sequel.