The Burn Zone is a blood zone 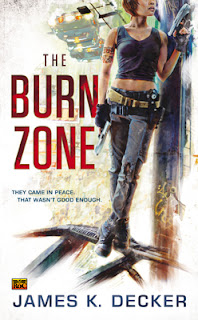 I picked this book up off the stack of books I had sent to me for review even though I had others ahead of it. The others weren't grabbing me and I wanted to read something that would suck me in and not let go. The Burn Zone definitely fit the bill. It starts off with impending doom and intrigue and quickly moves to the run-for-your-life phase. In fact, the majority of the book is running, fighting, investigating, running some more, fighting some more, injuries, sorrow, more running, more fighting . . . and dismemberment. Lots and lots of dismemberment. Personally, I'm not a fan of vivisection in my fiction - or anywhere else.

The Burn Zone's protagonist is a surrogate mother to alien babies, who takes drugs to numb the pain from her troubled childhood. No. Not troubled. Horrifying near-dismemberment. Dragon freed her from the meat farm and raised her as his own. The surrogate program is meant to help the aliens who crash landed on Earth to empathize with and understand the humans better. Sam has cared for several of them. It earns her a little scratch and she feels needed.

When Dragon comes home early saying that they must leave with bare necessities right now, she wants to take the baby. While they argue a bit over that, the soldiers come, beating Dragon possibly to death. Sam makes a spectacular escape only to come back to save him, but it's too late. They've taken him. As part of the surrogate program, she has Haan nanomites that connect her to the babies she cares for. Her mites picked up the brain activity of the female soldier in charge. Why would a Haan abduct a human and be so hateful and violent? Everything she has learned about the Haan say it isn't possible. They are uber fragile and have no concept of violence.

She returns the child to the alien settlement to keep it safe before hunting down the people who took Dragon and rescuing him. Dragon is accused of treason, but Sam refuses to believe it. But he has smuggled a woman and two children from the Pan-Slav region and, so the news is saying, a biological weapon.

Sam is helped by a Haan sent to her by the Haan woman that Sam convinced to take the baby back from her. She doubts Nix will be much help and struggles with truly trusting him, but she's desperate and her options are limited.

The deeper into the mystery Sam goes, the more gruesome the truths and the actions. I have to say that I don't recall reading a more gory book ever, and this is a sci-fi novel, not a horror novel. Even the evil werewolf horror novel I read had less dismemberment and gore. And I read this while I had the stomach flu. Really bad timing. Or maybe good timing. I didn't have to worry about losing my appetite. It was already gone.

Nix closed the distance between them and I heard a chirp as he punched through the spot underneath her breastplate.

His fist went straight through, and splintered the latticework bones underneath. I expected to feel agony from her, but it didn't come. Even when he wrenched his fist free and I saw he had dragged something out with it, I sensed no pain. Instead, she looked down at the wormy mass that pulsed between his fingers and I felt fury from her, and something else . . . betrayal maybe.


So, if your stomach can take it, The Burn Zone is a thrill a minute. I really liked the protagonist for her determination to save her guardian and ultimately her world. She had her issues of distrust, fear and insecurities, but she fought them as hard as she fought the enemy.

I would have actually appreciated more down time to recover from the relentless chase scenes, torture and brutal fighting. Sam lost a lot of battles. I kind of wanted her to catch a break more often, to have more hope threaded through. But, I think it's more realistic when it doesn't come easy. She really is fighting against insurmountable odds.

I'd like to say something about the ending, but I really can't without spoiling it. I'll just say it will surprise you. It's dark, but leaves hope for a future.

You might not recognize the author's name, but you might be familiar with his Revivor's Trilogy as James Knapp, the first book of which won the 2010 Compton Crook Award and was nominated for the Philip K. Dick Award. This is his debut novel under the pseudonym, James K. Decker.
Posted by Ann Wilkes at 12:09 PM

It';s always a good sign when the reviewer is itching to tell us the ending but can't because it will spoil a good surprise. Gonna go buy this book now!