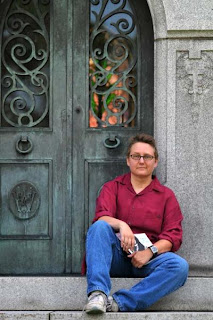 Lyda Morehouse has been an avid comic book reader since the early 1970s, having spent many happy days in her cousin’s basement reading her uncle’s collection that included many first issues of Marvel titles like Fantastic Four, Spider-Man, X-Men and hundreds more. Neil Gaiman’s “Season in Mist” partly inspired her to write her first novel in the AngeLINK tetrology, Archangel Protocol, which was published by Roc in 2001 and won the Shamus award for an original paperback featuring a private detective. Currently, she writes bestselling paranormal romances and YA novels as Tate Hallaway, while also attempting to revive her science fiction career with a prequel to the angel books called Resurrection Code, due out from Mad Norwegian Press in March 2011. She lives in Saint Paul, Minnesota, with her partner of twenty-five years, their son, four cats, two gerbils and a multitude of fish.

And she's a fellow Broad Universe member! Broads rock! Lyda came to my aid when I asked for help with reviews and I'm so glad she can give graphic novels and comics some sun. Welcome aboard, Lyda! 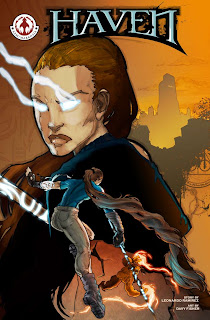 There’s something about Dante’s Inferno. In February this year, Electronic Arts came up with a high-octane adventure videogame based on Dante Alighieri’s descent into the seven circles of hell for Playstation 3/Xbox, and now that very same poem inspired a demon butt-kicking graphic novel by Leonardo Ramirez and artist Davy Fisher called Haven.

In Haven, we are introduced to Haven Irena Dante a high school senior and the current heir to the Dante Alighieri bloodline. She’s heard the story of how a relative of hers descended into hell, but what she doesn’t know is that his journey sparked an eternal blood feud between hell’s demons and the Alighieris.

The story begins at her mother’s funeral. Haven’s mother, who I’m not sure is ever named, is a stand-in for the famous Beatrice (Dante’s Muse and guide for the third section of the Divine Comedy, of which Inferno is the first part.) Haven’s mother’s death begins the original poem’s “deep woods” in which Haven quickly finds herself lost and in need of a “right path.”

However, instead of being drawn to Hell by being metaphorically assailed by wild beasts, Haven is literally sexually molested. After that all hell breaks loose… literally. The first issue ends with Haven waking up on the street, two years later, with glowing angelic script tattoos on both arms, a magic staff given to her during a brief sojourn in purgatory and, it is soon revealed, hereditary superpowers. The last three issues follow Haven’s battle to uncover the demons’ plot to infiltrate her father’s company and, like any good superhero, save the world.

Normally, when I read graphic novels or comic books, I only require the artist not to distract me from the story. I’m the sort of reader who will often forgive moderate art when the storytelling is strong. However, particularly in the case of the first issue, I got the impression that under the command of a different artist, I would have found Haven’s origin story gratuitously grim. Rape! Murder! Argh, all in the first ten pages! But, Davy Fisher’s artwork elevates this graphic novel nearer to the place I think author Leonardo Ramirez intended it to be. There were moments that positively reminded me of Neil Gaiman’s Sandman. In fact, a good blurb for this graphic novel could be: Sandman meets Zap! Pow! action.

The only thing that marred this collection was a few moments of clunky storytelling. When the storyline gets really pumping, the scenes also get a bit jumpy too. I was also left with some minor questions about the “whys” of Haven’s superpowers that, while not deal breakers, could use more explanation.

I can only hope that there will be another installment of this series to answer some of my questions. Despite the few hiccups I illustrated above, I found this graphic novel ultimately satisfying. Fisher’s artwork is worth the cover price alone and the premise rocks enough to forgive the minor flaws.

If you agree, you can order it here.
Posted by Ann Wilkes at 7:59 PM