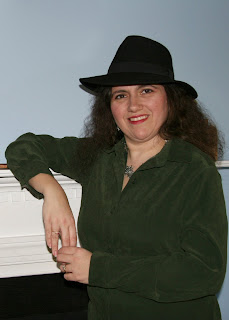 Karina Fabian writes humorous, Christian speculative fiction. I found Karina online and was intrigued by her sense of humor and her industry. Read on and you will be, too.


AW: Can you describe the journey to your first published book?

KF: Long, erratic and unexpected. I wrote a novel in college that was good but nothing spectacular, and sent it around to collect rejection letters. In the meantime, I went into the Air Force, got married, had kids... Later I dusted off the manuscript, blanched, rewrote it and sent it around again. In the meantime, I got involved in some writers' groups and my husband and I were starting short stories about an order of nuns who did rescue operations in space. Around 2000, two publishers, Kat Lively and Joan Stromberg, put out a call for submissions. Joan was looking for someone to write craft books for a Catholic girls' club, while Kat was starting an electronic publishing company for genre fic. Writing craft books sounded like a fun project for me and the kids, and Kat's FrancisIsidore e-books company a good fit for our Rescue Sister stories. Kat, however, asked us to create an anthology of several writers instead.

I can't remember which came out first: The Little Flower's Craft Companion or Leaps of Faith, but both were a far cry from what I'd expected in my writing career, yet both were fun to compose and works I look back on with pride. I've since written two other craft books for EcceHomo Press. FrancisIsdore e-books folded and Kat has moved on to edit for Mundania, but Leaps of Faith is now out in print from The Writers' Café Press. (Took us five years to find another publisher.)

Marketing those books has led me to other publishing opportunities, and I now have two more books out Infinite Space, Infinite God and Magic, Mensa and Mayhem. I have another anthology and another novel coming out in 2010, and I'm in one anthology Firestorm of Dragons, and will be in three more coming out in the next year.

All in all, it's been a fun time. And the novel I wrote and re-wrote? I have someone interested, but now I'm thinking I may re-write it again first.

AW: Who were your favorite authors before you started writing? And now?

KF: There is no "before I started writing" unless we go back to Kindergarten. So, fave authors: Madeleine L'Engle, Terry Pratchett, Douglas Adams, Jim Butcher, Maya Bohnhoff, Robert Asprin... Just to name a few.

AW: Does your sense of humor ever get you in trouble?

KF: I've always had a peculiar sense of humor--lots of puns, twisting situations... Sometimes, people don't get my humor, but that's OK. So far, I've only had one negative comment about humor in my work. A fellow author I admire said she can't recommend my novel because "she believes in the dignity of the person." I can see her point--my humor can be silly and a little over-the-top, though never of the caliber of the Simpsons, for example, while hers is more gentle. However, I also know that people get themselves into undignified situations, and those can be just plain funny. Ironically, as a child, I didn't always realize that, and I was quite hard on myself and my life. Now I laugh a lot more at my foibles and follies--and I'm a happier, saner person for it.

Plus, my husband and I fell in love trading puns, and are still crazy in love. We annoy our children, yet they share our humor (and how many 14-year-old girls say they enjoy clowning around with their mom?). And my books have been heralded as hilarious and intelligent, so I'm glad for my sense of humor.

AW: What are some of your favorite ways to torture your characters?

KF: My best friend (also a writer) and I call it "torturing your characters for fun and plot-fit."

It really depends on the story and the characters. When I'm doing something funny, I will take clichés and twist them or stretch them to the extreme. For my next novel, Live and Let Fly, I'm spy-spoofing, so I watched a lot of spy movies and read books and took notes on clichés to twist or incorporate into my characters. (Did you know Bond was afraid to fly--and inevitably, there was a storm during his flights? Naturally, I had to create a scene for my spy-guy so he could have a nice "episode." Of course, I made it a killer magical storm. What fun is a little lightning?)

Sometimes, my characters make trouble for themselves or each other. For example, I did not invite Coyote to the Mensa Convention in Magic, Mensa and Mayhem. He just showed up for the panel discussion on thinking outside of the box, started flirting with all the Mensans (and the guests, hotel staff...), and generally gave Vern a real headache by the time the case was over. Of course, he broke parole to get to Florida, so Vern got his revenge.

Other times, I just keep asking "what if?" Vern, my dragon detective, came from watching a noir skit on the comedy show, "Whose Line Is It, Anyway?" and his tortured past developed by asking "What if dragons can't die? What would St. George do to dragons? What if he took away his dragon greatness and made him earn it back? What if bad deeds meant he lost powers?" and such. Poor Vern! It's three steps forward and one back with him.

Finally, sometimes the plot just creates its own tortures. These usually surprise and disturb me.

AW: What made you decide to edit anthologies? How has editing anthologies affected your writing?

KF: I edited anthologies because I was asked. I enjoy it, but it's a lot of work, so in one way, it's taken away from my writing time. In another, it's made me a better writer because I get to work closely with some super talent.

AW: Can you give us a thumbnail of what's going on with Christian speculative fiction? Can you recommend some other authors?

KF: Before I start, I want to note that when I talk about "Christian fiction," I am talking about fiction with an obvious Christian message, which speaks frankly about matters of faith and the Christian religion. It might move into the arena of evangelizing or peachiness, but just as often simply recognizes the Christian faith. There are several wonderful books out there (mine included) that are classified as Christian because the characters or theme is recognizable as Christian, yet the treatment of the faith is so lightly handled that they would be equally at home in the secular world. (In fact, it's my opinion that if the authors had chosen to make up a religion instead of using a real one, they would have been published by a large, secular publisher.)

Christian speculative fiction (science fiction, fantasy and horror) is a growing phenomenon, but one you're more likely to find in small presses than in major publishers and bookstores. The major Christian publishers still (in general) conform to the CBA/ECPA guidelines, which can be very restricting for genre fiction, and the major publishers have just begun to experiment with Christian fiction as a genre.

I know of several presses, magazines and websites dedicated to Christian fiction:

I have two books in the works:

--Discovery is a science fiction story based in my Rescue Sisters universe. What keeps you from God? An exploration team discovers an alien device that exposes their greatest spiritual wounds--and until they find healing for their souls, it will wreck havoc with their lives.

--Gapman is my third DragonEye, PI, novel. Ronnie, mild-mannered entertainment reporter for the Los Lagos Gazette, falls into a vat of enchanted toxic waste, gets bitten by a radioactive pixie, and is struck by lightning while crossing the Interdimensional Gap. When he develops superpowers, however, the real chaos begins!

I also have a new series, Damsel and Knight, in the works. This is also in my Faerie/Mundane universe--police mystery fantasy/romance starring Police Captain Michael Santry and Veronica Bates, a griffin-turned-human. I have the first three books mapped out, but I need to finish Discovery and Gapman first.

I also want to go back and rework my Miscria trilogy and get the last book done.

As Christian readers discover that spec-fic without an Atheitic worldview exists, ours is a growing little sub-genre. As Bach signed at the end of all his musical compositions, "To God be the Glory."

Frank Creed.com: the official site of Flashpoint: Book One of the UNDERGROUND

The Finishers.biz: Polishing Manuscripts until they Shine

Thanks for hosting me!