Last year, opening ceremonies was very entertaining, with Timothy Zahn and filking by Char MacKay. Of course, the bat flying around the auditorium was a nice touch, although no one could take credit for that but the bat.

This year was ... different. I should probably stop right there before I slam the poor con com. But now you're curious, aren't you? Well, when Dennis Gagaoin said that we were about to reap the benefits of the con com's months of fighting, that was clearly not a good sign. I'm not sure if the program they had originally planned fell through because someone bailed or they never truly spent time organizing the opening ceremonies. What followed was a lot of people standing up and pinch-hitting. It would have been better to just have one person apologize for the lack of any formal opening ceremonies and say, we have a great weekend planned for you filled with this, this and this. Now go have fun. But no one asked me. Luckily, I live two states away so I can't be tempted to sort them out.

Having taken two planes to get there, and having to read at 9AM, I begged off of further con fun for the evening.

Only one person showed up at the 9AM reading, so the readers outnumbered the listeners. I read from a story that is set in Chelan, WA and begins with a tragedy that really happened there in the 40s. Our audience of one cried. Maggie read from her new novel, Lachlei. We traded books, so I get to read the rest. :)

I stayed with my writing buddy, Sue Bolich, who lives near Spokane. (Way better than the dorm experience of last year – don't get me started.) I had met Andrea Howe of Blue Falcon Editing last year. It wasn't long before the four of us were the four musketeers for the remainder of the weekend, beginning with a panel Saturday morning. When we weren't paneling, we were eating, talking and laughing our heads off.

My schedule of panels, as I said before, was a perfect fit for me. And my co-panelists were all marvelous, informative, polite and entertaining. My-Twit-Book, Sci-Fi and You Are you kidding me? What do I spend more time doing than writing? The artist guest of honor, John Picacio was on the panel and brought some pointed Twitter questions. I wasn't much help with those since I'm still ignoring the (bird) call to tweet. We did have a lively discussion about posting or tweeting etiquette and how to silence people who fill up our walls or phones with a constant barrage. I met John in the green room (which moved not just once, as it did last year, but twice!). He was asking about the table tents and if his was there. I didn't recognize him and said, "It would help if you told me your name." He's apparently forgiven me.

My next panel was in the same room ten minutes later. Another subject near and dear to my heart (and my writing): grammar. Andrea sat next to me on this one and after she made a Princess Bride and Firefly reference in asides to me, I knew: friends for life. Maggie, Sue and I had made lunch plans already. I invited Andrea and our little band of geeky, literary lasses was born.

I shared a signing with Patty Briggs. Her line was none-stop, a dozen people deep for the whole hour. I didn't get a chance to speak with her, but she has obviously made an impression on a good number of people. I hope I can get to know her at a future con. I signed one copy of Awesome Lavratt.

Sunday was yet another 9AM appearance. Good thing there was no drinking – or at least none that we bothered to find. The panel was on Worldbuilding. What could I possibly say sitting next to L E Modesitt, SpoCon's writer guest of honor? Sue, Maggie and I still managed to look half-way intelligent. I picked up a couple of good book recommendations along the way: Guns, Germs and Steel: The Fates of Human Societies and Collapse: How Societies Choose to Fail or Succeed, both by Jared Diamond, and A History of Food by Maguelonne Toussaint-Samat.

Three of the four musketeers (minus Andrea) had a nice conversation with Lee (Modesitt) in the hall after the panel. Very personable guy. And he redefines dapper. Mark Ferrari asked him how many vests he owns. His reply was something over 80! I had interesting chats with Mark in the (first) green room about publishing and writing. And I lugged Mark's hefty tome, The Book of Joby, up to Washington just to get his autograph.

Mark and I were on a panel last year in which we created a story for the audience on the spot. What fun! He read Awesome Lavratt during the con and praised my sense of humor during the panel – bless him! We've been pen pals ever since. He was the artist guest of honor at SpoCon last year.

Something new this year was a charity thing where people bought little matchboxes with slips of paper in them for a buck. The slips of paper had a name of a guest or pro and a greeting. They had to find the person and offer the greeting. Then they got a donated item from that person's goody bag. It was a nice idea, but will need some fine tuning for next year. I especially enjoyed signing one of my books (out of the goody bag) for an eleven-year-old girl.

My con report is rather limited. I didn't attend the masquerade, I don't game and I had to catch the flight back before the closing ceremonies. Still worse, thanks to the TSA (They searched my husband's luggage and it poofed.), I had no camera for the trip. I should have picked up a disposable. Anyway, I took one picture with my phone and had a passerby take another. They looked great when I peered at them at the time. Apparently, not so much... 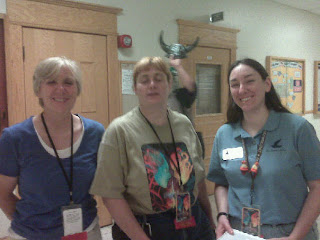 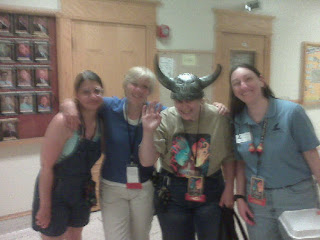