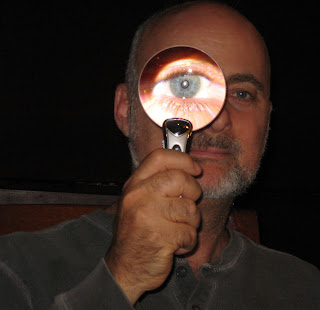 Meet David Brin, a science fiction author and so much more. He's a scientist, inventor, speaker, futurist, cast member and technical consultant. He speaks not just about his books and science fiction, but about science, our future, technology, transparency, security and politics. He's also been and continues to be a cast member, writer and participant in science shows on TV and radio. You simply must check out his long list of creds on his website and browse his blog, Contrary Brin. Oh, and he's one of my all-time favorite authors. I was just asked for a list of several books for a 16 year-old to read as an introduction to the genre and his books made the list twice: Practice Effect and the Uplift War series.

AW: I know you're a scientist and inventor. Does the day job ever feed your muse?

DB: What day job? Everything I do is a hobby. Some of them happen to pay, but I look at everything as participation in a renaissance. All of it feeds everything else.

AW: The Uplift series was a sf masterpiece in my opinion. Do you have any more multi-volume novels on the horizon?

DB: Oh, if only I had the self-copying device portrayed in Kiln People! I have dozens of story lines - some of them in cool series -- but I'll only live to write a few of them. Alas.

AW: Do you have any plans to write more in the world of Stratos?

DB: Glory Season is a perfect example. I have a whole universe about the slower-than-light "peripatetic" emissaries, visiting farflung members of the Human Phylum... plus more on Stratos.

AW: Did your interest in privacy issues begin in your fiction or did your existing views find a freer voice there? (I add the word freer here because you also broadcast your views outside of fiction in your blog and in speaking engagements.)

DB: I am concerned about one thing, above all, understanding how and why humanity escaped (at last) from its old, vicious cycle of feudalism and began a tremendous enlightenment. One that included vital things like science, democracy, human rights and science fiction. I've come to see that openness -- including openness to free-flowing criticism -- has been the key. Secrecy is the thing that makes every evil far worse. And it is especially pernicious when practiced by the mighty.

But the real irony is inside the sci fi community. The trend toward feudal-romantic fantasy may seem harmless. But dreaming wistfully about kings and lords and secretive, domineering wizards is simply betrayal. Pure and simple. Those bastards were the enemy for 6,000 years. Some kings and wizards were less bad than others. But they were all "dark lords." We are the heirs of the greatest heroes who ever lived. Pericles, Franklin, Faraday, Lincoln, Einstein. Any one of whom was worth every elf and dragon and fairy ever imagined.

DB: Stand on Zanzibar, by John Brunner, was simply creepy how far ahead it looked and how accurate its vision was. Lord of Light, by Zelazny, was a breakthrough in multicultural SF that was also gorgeous and exciting and all about rebellion! LeGuin's Lathe of Heaven was darn near perfect. Vinge's Rainbow's End is a gem of recent "singularity fiction."

AW: What was your funniest experience at a convention or other speaking engagement?

DB: Walking on stage as the musician David Crosby was walking off, and simultaneously saying, "hey, I'm one of your biggest fans!"

AW: What was it like writing a Foundation book?

DB: Like breathing. It flowed easier than any other novel I ever wrote. Because openings are hard for me while endings are easy... I always get them right. Foundation's Triumph was all about ending -- tying together all the loose ends -- a tremendously detailed and crafted universe that already existed. I could see where it all led -- where Isaac's vision had to lead. And I simply put it down.

AW: What sparked your interest in graphic novels? Did your kids have anything to do with it?

DB: Sure, a bit. But mostly, I like experimentation. Creating the script and art guide for The Life Eaters was very much like writing and directing a movie, especially with the incredible artist Scott Hampton executing the vision. It was runner-up for the big graphic novel prize in France, where they adore the genre and think it to be High Art. Alas, DC Comics printed maybe twelve copies in the States. 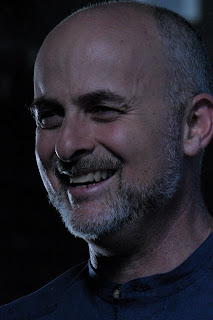 DB: I'm hard at work on a sprawling near future novel called "Existence." About all the hundred ways the world might end... unless we skirt the right path.

My latest book, Through Stranger Eyes is a collection of of my liveliest essays and book reviews, Including some provocative essays about Star Wars, Tolkien and Trek! See also my recent novella - "Shoresteading" - set in a near future of rising seas and tensions, offers a glimpse into my next novel. This fast paced tale of mystery and alien artifacts is posted online for free on Jim Baen's Universe Magazine.

Also on Universe is my new serial-comedy "The Ancient Ones." SF comedy is hard! But I think folks will get some har hars.

Oh, and Recorded Books Inc has just released yet another audio reading of one of my books -- this time Brightness Reef -- read by the great George Wilson.

AW: Can we find you on TV now?

DB: I was a cast member on the History Channel show "The ArchiTechs" as well as History's most popular show ever: "Life After People." I'm now appearing frequently on the science shows "The Universe" and "Alien Worlds."

This is a great interview. Thanks for sharing.

Check out my first and recently released novel, Long Journey to Rneadal. This exciting story is a romantic action adventure in space.