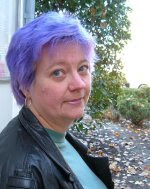 I met Cat through Broad Universe. She's been REALLY busy lately. She's cranking out stories, anthologies and is managing editor for Fantasy magazine. Her stories have appeared in the best magazines, including: Asimov's, Strange Horizons, and Weird Tales.

She runs an online game called ArmageddonMUD, is a Clarion West graduate and a former tech writer for Microsoft's Visual Basic.

AW: Who encouraged you to write?

CR: My grandmother, Helen Francis, encouraged me to write as well as to read. She bought me my first typewriter when I was twelve or thirteen, as well as my first copy of The Lord of the Rings. Others included John Barth, Stephen Dixon, Grace Paley, William O'Rourke, and of course all the fabulous people I've been meeting since deciding to attend Clarion West in 2005. My mother supported me every step of the way and even paid the application fee for the Johns Hopkins Writing Seminars where I got my MA. I've also been extraordinarily blessed in having a spouse who is supportive of my writing as well. He encouraged me to go to Clarion West, and has been shouldering the mortgage and household bills for the past four years. This also kicks me to be productive - I like working at home, and I'd like to justify his faith in my work.

AW: Do you have trunk stories or novels? Will you resurrect them or call them good practice and keep them for posterity? Do you pull them out to see how far your craft has come?

CR: I have several NaNoWriMo novels, one about a dimension-traveling dysfunctional family and another set in the game world of Zalanthas from Armageddon MUD. I also have a superhero novel, but it's buried on some media I can't access at the moment. I may pull them out at some point, but right now I've got plenty of projects to work on. I haven't taken those out to look at recently, but I was looking at my papers from grad school a couple of weeks ago. I still like some of the stories from then, such as "The Accordion," which recently appeared in my collection, but there are a few, like a story told in two parallel columns, one describing the players and the other describing the roleplaying game they're playing, that are so wacky and experimental that I find myself wondering what the heck I was thinking. I'm kinda amazed I got into Hopkins with that one.

AW: What can you tell my readers about Clarion West?

CR: I recently talked about writing programs for Jeff VanderMeer's excellent book for writers, Booklife, and I'll reiterate that advice here: A writing workshop can be great, but you need to go in not expecting it to be a magic key. You also need to go in with both a willingness to listen to others' opinions, and enough strength to be willing to stick to your guns if there's something you don't want to change. One of its greatest values lies not in the teaching, but in the networking opportunities it provides.

What I strongly suggest with any workshop is reading at least a little of the instructor's work beforehand. That gives you a sense of their strengths and weaknesses, allows you to see where they're pulling from their own experiences in teaching, and lets you ask intelligent questions. And pay attention to your classmates - keep in touch with the ones you feel some affinity to, because they'll be a source of critiques and suggestions for the rest of your life if you cultivate the relationship. As far as Clarion West goes, it's a six week writing workshop where the group has a different instructor each week. Most are writers but the fifth week is traditionally an editor. In 2010, the instructors will be Michael Bishop, Maureen McHugh, Nnedi Okorafor, Graham Joyce, Ellen Datlow, and Ian McDonald, which is a great lineup. It's an intensive workshop - you are expected to write a story each week, and one of the things it does is convince you that you are capable of writing a story a week.

I went through the program in 2005, studying with Octavia Butler, L. Timmel DuChamp, Andy Duncan, Connie Willis, Gordon van Gelder, and Michael Swanwick. For me, it was a terrific experience, and our class has produced a number of strong writers, who've gone on to do some great stuff. In that I'm particularly thinking of Rachel Swirsky, both a writer and an editor of the excellent fantasy podcast site, PodCastle, Katherine Sparrow, who I think will be our next Carol Emshwiller, and Heather Lindsley, who's had some terrific and wonderfully funny stories in the Magazine of Fantasy & Science Fiction, but there were so many strong people in our class that it's hard to do justice to it. I've kept working with Clarion West on a volunteer basis, and I participate in their fundraising Writeathon every year. I think it's a great institution, and I meet a bunch of great people each year. The locals in my class started a writing group that takes in a few new local Clarion West attendees each year, and that group is a source of inspiration and some terrific friendships.

AW: What's it like co-editing a spec-fic magazine? Does it help your writing? How do you still find time to write?

CR: It's fun! And it's hard work! I've learned a great deal from it. It helps my writing in that it forces me to read widely in the field, as well as to help sharpen my sense of what makes a story good. It hurts it in that it does take time away from writing. When I first started, Edmund Schubert, the editor of Orson Scott Card's Intergalactic Medicine Show, kindly took some time to talk to me about it and warned that too much focus on the magazine and I'd find my writing failing.That's still a struggle for me, and probably will remain one. But I really enjoy working with the magazine.

AW: Has your sense of humor ever gotten you into trouble?

CR: All the time. I can't begin to say how many times I've stuck my foot in my mouth, thinking I was being entertaining. Luckily, people have been very forgiving. I have had a couple of people complain about my lack of formality in editing, and it's invariably been an occasion when I was being far less funny than I thought I was.

CR: At ConFusion, where I was a writer GoH, I witnessed a showdown between pirates and a zeppelin crew. Unfortunately, they did not respond to the crowd's suggestion of a dance-off.

AW: What's your favorite story in the anthology you co-wrote with Jeff Vandermeer, The Surgeon's Tale and Other Stories?

CR: I love "The Surgeon's Tale." It was a great experience collaborating with Jeff on that, and I think the story turned out amazingly well, with depths to it that I'm still figuring out. To me, it talks about love, and the expectations and assumptions that we surround a lover with. Plus it's funny and lovely, and features a disembodied, crawling hand. What could be better than that? I'm also very fond of "The Dead Girl's Wedding March," which was the first story I sold to Fantasy, and one of the reasons Jeff asked me to collaborate, I think. I had a lot of fun writing that story, and there are moments that still make me grin.

AW: When can we expect to see The Moon's Accomplice? Can you tell us about it?

CR: The Moon's Accomplice is set in a fantasy world, Tabat, which a number of my stories share. It's a world where intelligent magical creatures are assumed to be subhuman and there to be owned by the humans, and it is in part an exploration of how we both infantilize and demonize those we oppress. A story that appeared in the December issue of Realms of Fantasy, "Narrative of A Beast's Life", is actually a chunk of the novel.The main characters are: Bella, a disgraced gladiator; Skilto, a Merchant Mage who wants to be purely a scholar; and Teo, a young shapeshifter just arrived in the city and seeking shelter from the priesthood he's been promised to. Bella is offered a chance to redeem herself by spying on a strange circus for the Duke of Tabat, and Skilto and Teo find themselves drawn to the circus as well. There's centaurs, a sphinx, dead dryads, minotaurs, and a wide array of other creatures, all caught up in a moment that promises to be revolutionary for their world.

AW: What else are you working on now?

CR: I just finished a young adult novel, Phat Fairy, and I'm about to turn to a horror novel, Queen of the Fireflies, that I've got about 40 thousand words on so far. The first is in part my reaction to Twilight and how the young woman in that is somewhat...inert. The second is a response to several coming of age/horror novels, specifically Stephen King's It, Dan Simmon's Summer of Night, and Robert McCammon's A Boy's Life. All of those are boy's stories (yeah, I know there's some women in them, but they seem peripheral) and I'm a little troubled by the method by which the kids in It escape from the menace initially. So I wanted to do something with girls and coming of age. I'm sure I'm not the first, but I hope to do something interesting with it. It draws heavily on the experiences of growing up in a Midwestern town, South Bend, Indiana, in 1976, when the Freedom Train came through, and I'm really looking forward to writing a particular scene that takes place aboard the train. I still like writing short stories and among the ones I've finished lately is a sequel to "Kallakak's Cousins" called "Bots d'Amor." I've also written some dark fairy tale-type pieces, a horror story about television, and some urban fantasy.