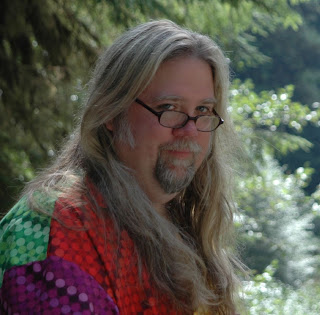 I've been attending West Coast cons for five years now, and one name seems to pop up at all of them: Jay Lake. In fact, it seemed that everyone knew him personally but me. And they all had great things to say about him.

At BayCon this year I told Bob Brown, programming for RadCon and Promo Chair for Renovation (WorldCon 2011), that I thought he wasn't real. Everyone had just made him up. I wish I had a copy of the video interview Bob conducted with him on his cell phone in which Jay affirmed that, yes, indeed, he was real. I finally met Jay face to face at World Fantasy Convention in San Jose at the end of October.

I recently reviewed Grants Pass, a post-apocalyptic anthology edited by Jennifer Brozek and Amanda Pillar. His story, "Black Heart, White Mourning" was one of the best, and had one of the most interesting characters.

Now I can introduce him to the few people who haven't read him yet or met him at conventions. Jay Lake is a relatively new, yet successful (and prolific!) author and editor. He frequently appears at conventions and writing conferences, has been nominated for Hugos and World Fantasy Awards, and won the John W. Campbell award for Best New Writer. He published three books this year and has several in the pipeline. This in addition to over 250 short stories published to date. Find out more about him after reading the interview below, by visiting his website, www.jlake.com.

This interview was conducted in mid November. Photo © 2009 Roger Podva

AW: Who were your early influences for SF and for writing?

JL: I was born and raised overseas, in the days before VCRs were on the consumer market, and satellite TV wasn’t generally available. So I had little exposure to the broadcast media of the 1960s and 1970s, during the formative years of my childhood. What I had instead was access to an incredible number of books, of a fairly random selection and variety.

By the time I was ten, I’d settled in on fantasy and science fiction. My mother had sent me a copy of the Lord of the Rings box set, The Hobbit plus the trilogy, for Christmas that year. I’d begun reading my way through the classic Heinlein and Asimov juveniles, along with other random fare ranging from Andre Norton to Samuel R. Delany. It was a largely unguided process, wading through a library that would be recognizable to a fan fifteen or twenty years older than me, and it settled genre fiction around me like a mold, a base, a foundation.

I think that period of my reading was capped by discovering Gene Wolfe’s Book of the New Sun when I was twenty, on a college roommate’s shelf. I read that and thought, “We’re allowed to do this with the language?” That’s when my ambition to be a writer truly began to gel.

AW: What was the best bit of advice you ever received regarding your writing?

JL: Ray Vukcevich once said to me, “cut out all the parts that aren’t interesting.” The trick is learning to tell the difference, of course. That can take a lifetime. I’m also pretty fond of “write more.” Everything else is just suggestions.

AW: Can you tell us a little bit about the three novels that came out this year?

JL: It has been a bit of a busy year, yes. Green came out from Tor Books this past June. That’s a secondary world fantasy, essentially a coming of age adventure story with gods, architecture and sex. One reviewer referred to the book as being about “teenage lesbian ninja nuns.” I’m not sure I’d have put it that way, but I’ll roll with it. There is a sequel, Endurance, coming out in 2011, and a third book, Kalimpura, in 2012.

In October of this year, Night Shade Books finally shipped Madness of Flowers. That’s my sequel to 2006’s Trial of Flowers. They’re both secondary world fantasies set in and around the City Imperishable, the decaying capital of a lost empire that mostly lives now off banking, manufacturing, and dreams of past glory. Publishers Weekly referred to the first book as “a grand Guignol of violence and seriously perverse sex.” (Both books received starred reviews there.) I prefer to think of it as meditation on urban planning and the processes of political succession, but to each their own.

Here at the end of 2009, MonkeyBrain Books is putting out Death of a Starship. This is a very short novel, 49,000 words, classic SF adventure involving mysterious aliens, lost battleships and a priest who conducts investigations for the X-Files unit of a future empire-spanning orthodox church. Think of it as Saturday afternoon space opera.

AW: When did you catch the public speaking bug and how?

JL: Well, basically, I’m what happens when the class clown grows up without being sufficiently suppressed by the educational system in the process. I’ve always been happy to yak it up in groups. My taste for formal public speaking – toastmaster work, charity auctions, that kind of thing – actually stems from an advertising job I had in the mid-1990s where our CEO believed that every employee should go through speaker training. This was to make us better presenters, and more effective communicators with our peers and our clients. I’m not sure his plan did all that much for its intended goal, but the training sure educated and formalized my inner ham.

AW: How does your editing compliment your writing and vice versa?

JL: In simplest terms, the writing always comes first. It can’t be any other way for me. But I love doing editing work, because that gives me a lot of insight into the processes and mechanisms of story, in ways I could not achieve from reviewing my own work. I can’t detach from my prose the way I am already detached from anyone else’s. It’s like trying to see the faults in your children.

Editing work also lets me see what writers are doing right now. This isn’t a case of “spot the trend”, but more like a spot check on craft, on theme, on styles as they evolve in the marketplace. Remember that anything you see in print is somewhere between three months and three years old before it appears. Quite often on the long side of that. So reading manuscripts gives me a different relationship to what my fellow writers are up to, one I don’t have any other way to create.

All of that, of course, feeds back into my writing, both directly and indirectly.

AW: How have your struggles with cancer affected your writing?

JL: Profoundly. I’m right now working on a cancer story. Framing my fears, my feelings, my experiences, on the page is certainly therapeutic for me in some obvious ways. But I already know from my work over the past eighteen months of blogging my cancer experience, and being publically frank about things that are far more often left unspoken, that it can be therapeutic for others.

Even getting away from that kind of immediacy, cancer is absolutely affecting my themes, my literary concerns, my voice, my style. I am being remade. Ask me in a few years what it all means, and I might have a glimmering of an answer. Right now I am simply embedded in the journey.

AW: I understand you have done a bit of globe trotting both growing up and as an adult. If you could live anywhere (money is no object, family can come with or not, you can afford a private jet to get to all the conventions, etc.) where would you want to live? And why?

JL: I would live everywhere! A house in Yorkshire, an apartment in Hong Kong, a houseboat in Johannesburg. Why not? The world is as small as your resources can make it, and there is literally nowhere I wouldn’t want to go see, go spend time in. A dream job of mine would be to be sponsored to go photograph and blog around the world, keeping enough bandwidth for my fiction, and seeing everything I could.

But even then, I think I would still call Portland home. I’ve been in all fifty states, and several dozen foreign countries on four continents, and Portland is the place I like best for just everyday living.

AW: Social networking has really taken off recently. More people communicate via email and cell phones, and don't even have a land line. What do you think communication will look like ten years from now?

JL: Hah! If I could answer that question, I’d be living the life I just described. I mean, who foresaw Twitter? Or blogging? Or the Web? Or email? Or cell phones?

To give you a slightly more serious answer, and to maintain at least a shred of my SF writer cred, I have to say that message platform convergence is nearly certain. Look at Google Wave for an example of precisely that effort. Or how Google Voice is thoroughly virtualizing the telephone experience, after well over a century of a fixed model which even cellphones essentially emulate.

Email has a completely different rhythm than chat, or SMS. The social networks like Facebook have yet another rhythm. But clients, and protocols, that can combine or multiply access across divergent channels will provide immense convenience to users, and therefore power to whoever controls those clients and protocols.

AW: What are you currently working on?

JL: A cancer story called “The Specific Gravity of Grief”, for Fairwood Press. I want to get that done before my upcoming surgery. I had also planned to spend the rest of this year revising a novel jointly authored with my life partner, Shannon Page, but the current cancer issues are probably going to delay that. The book is Our Lady of the Islands, and is a fantasy about a middle-aged woman with grandchildren, a bad marriage and a moderately successful business, who gets sucked very unwillingly into the business of gods and politics.

Glad you finally were able to meet Jay - thanks for the great interview.