Beauty Has Her Way 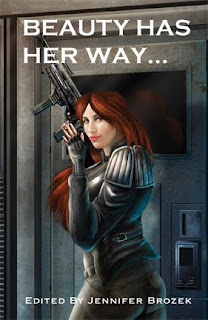 In Beauty Has Her Way, editor Jennifer Brozek [interviewed herein] brings us a collection of short stories featuring women. As Ms. Brozek explains in the introduction, the title is taken from a song by Mummy Calls that she discovered on The Lost Boys soundtrack. Each story here is about a woman, but these are no stereotyped damsels in distress. While certainly in distress, these women don't wait to be rescued by a fairy tale prince, but take action and use all of their assets - beauty, sex, or their wits, to conquer their adversaries. They're not all heroines in the typical sense, and many of them are far from stellar role models, but they do manage to accomplish their goals and get their way.

The anthology is divided into three sections - Yesterday, Today, and Tomorrow - and the stories vary all over the speculative genre, including sword and sorcery, historical fantasy, urban fantasy, and space opera. I enjoyed most of the stories, but by the middle of the book, many of the protagonists' motivations centered around revenge. The details about the women's enemies and how they enacted their revenge differed, but especially as these were mainly "Today" stories, the setting did not offer as much variation to set each tale apart. The repetition of revenge as a theme shouldn't take anything away from each story individually - the wrongs these women faced felt legitimate and they often overstepped legal or cultural boundaries to fix the situation they faced.

One advantage an anthology offers over a novel is that there is no overall narrative, so if you tire of revenge or prefer fantasy to spaceships, just skip around and revisit the other sections later. For readers who don't mind mixing it up a little, this anthology provides a good assortment of stories. I did find one tale - The Runner, by K.V. Taylor - to be out of place. It may have occurred in the future, but with a plot that centered on a clan defending its swampy home, it could just as well have been an alternate world fantasy.

A couple of the stories also felt incomplete - as if they belonged to a larger novella or novel - and left me feeling like I had missed something. In Maurice Broaddus' story of ancient Rome, I, Theodora, some of the most exciting events are described in a few short paragraphs at the end. And in Witch Fire by Erik Scott de Bie, I found the concept of a gun witch to be intriguing, but felt like the witch's encounter would have had more impact if I had understood some of the character's back story better. At the end of the volume, there are biographies for all the authors. I'm going to highlight some of my favorite stories below:

"Dunkle Froline" by Ramsey Lundock
Humans are kept as slaves by their demon overlords in this harsh fantasy world. When a new pit slave is brought into the household, she must learn that the best way to fight her captors may not be the most obvious one. I really sympathized with Tessa and her plight when she is finally freed from the underground pits only to discover how little she knows about her world.

"Vengeance is Mine" by Kenneth Mark Hoover
This story started the cluster of revenge tales for me, but was set in such an interesting alternate weird West setting that I think it was one of my favorites in the anthology. A half-Indian woman takes it upon herself to see that an outlaw is dealt with when the law cannot do enough.

"The Moko-Jumbie Girl" by Chuck Wendig
A cop brings a girl to jail after she kills a pesky neighbor's chickens in an angry fit. Yet, Kalinda's true goals are only revealed to the police once she calls upon the Moko-Jumbie's powers. I liked this story because the plot elements came together in an unexpected way with a satisfying conclusion.

"Someone Else to Play With" by Pete Kempshall
This story was told through the man's point of view, but dealt with his ex-girlfriend's struggle to hold onto him when a rich woman from the other side of town seduces him away. The Australian slang in this tale put me off at first, but the meaning was clear and the language was appropriate to the character, so it ultimately made for an engaging tale.

"Ride the Rebel Wind" by Amanda Gannon
The first story in the Tomorrow section brings us into a post-apocalyptic setting where a few humans roam on skyships between isolated settlements. Two strong women clash in a search to destroy the Kraken as it rides through thunderstorms and brings devastation to defenseless colonies. I couldn't put the book down as I read this dark, yet fascinating, tale about the creation and destruction of a monster.

"Her Eyes On" by Kay T. Holt and Bart R. Leib
What's a woman to do when she's stranded on a planet where only men have rights? Build her own ship so she can leave, of course. But when her husband sells her ship, she's faced with some tough decisions and a daring flight. This story was a great example of a woman who makes tough choices that fall into a gray area of morality, but the authors made me both cheer for her and simultaneously struggle with her decisions.

Editor's note: Beauty Has Her Way also includes "Trapped Star" by Ann Wilkes. Due to conflict of interest, I asked my reviewer not to single that one out.
Posted by Ann Wilkes at 5:09 PM