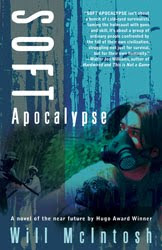 
Soft Apocalypse gives readers a close up and personal view of an apocalypse caused by a convergence of many different and unfortunate political and natural disasters. It focuses not on the causes, but the effects. McIntosh delivers this tale of doom and gloom in a fresh, hip first-person voice that draws the reader immediately in.

Jasper, an unemployed college graduate who had his whole future ahead of him, now has to fight every day to have any future at all. Jasper's parents died three years earlier in a water riot. He hangs onto whatever vestiges of "normal" he can find, while trying to come to terms with the prospect that it may not be getting better after all.

Jasper, his best friend, and eight others live as nomads, going from town to town, trading energy cells for food to whatever businesses are still in operation. The group uses portable windmills along the sides of roads to charge the cells from the gusts raised from passing vehicles. They also gather solar energy with solar cell-equipped blankets.

As the story progresses, those end up being the "good days" though Jasper complained bitterly about the reality of it at the time. He is forced into situations where he must kill or be killed and kill or let his friend be gang-raped. It's not an uplifting read, but it's definitely a thoughtful one.

Most Americans hadn't known what suffering was until the depression of '13. In school we used to hear about the so-called "Great Depression," as if having a lot of unemployed people who were reasonably well-fed was this terrible holocaust. We were wimps. We're not any more—we've learned how to eat bitterness, as the Chinese say.

Soft Apocalypse explores some hard questions. What would we do in desperate situations that we may never have to face? Can we ever know until we're in them? Do people forced to kill lose a piece of themselves in the process?

My head was spinning from the last twenty-four hours. I felt great and awful, exhausted and exhilarated. Afterimages of Ange in the shower were superimposed with the priest feeding me from a beverage lid. Now the puddle of blood where Amos had fallen swirled with this opportunity. I guess I needed to take my joys where I could find them, and the hell with the notion that it was selfish to be happy amidst suffering. There was always suffering.

Adding to the pathos, Jasper goes from one hopeless relationship to another, all the while wondering if there ever will be such a thing as a normal relationship again. From a married woman who won't let go of their precious snatched, chaste meetings and texts to an abusive, self-absorbed rock-star with a death wish. Then it’s a friend who doesn't mind the occasional comfort bang, but doesn't want a romantic attachment.

When the world is falling apart, relationships matter all the more. They don't cost money, but they do make you vulnerable on yet another level at a time when you're scared of shadows.

McIntosh shows a lot of insight into this struggle and includes believable inner dialog to further delve into the depths of the grueling existence that forces so many hard choices. It's about trying to do more than survive. Trying to preserve one's humanity in a world turned upside down. Trying to find love when tomorrow may never come. I heartily recommend it.
Posted by Ann Wilkes at 5:16 PM