Untold Chronicles could be told better 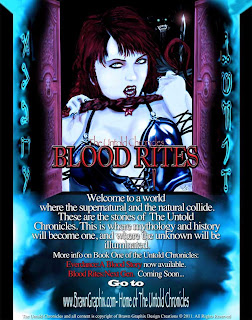 If you’re intrigued by morally-ambiguous vigilante characters like Showtime’s serial killer antihero “Dexter,” The Untold Chronicles is a graphic novel for you. On the surface, Kate Bennet appears to be a mild-mannered kid lit author, but, in reality, she’s a blood-thirsty vampire in desperate need of a mentor. Her vampire husband died leaving Kate unable to fend for herself. Luckily, she meets the queen of demons and mother of all vampires, Lilith, who relishes taking Kate under her wing, as it were.

In the course of the graphic novel, the reader is also treated to the history of Lilith. As she tells her story for Kate to write as a new book, we see how Lilith went from being the first wife of Adam to Lucifer’s lover. Having written extensively myself about Lilith and Satan, I found those sections particularly interesting.

The only thing that mars this collection is the artwork. It’s very uneven. Individual panels can be quite well-rendered only to be followed by very sketchy or blurry ones. Unfortunately, that’s true for the lettering as well, which makes the book, literally, difficult to read.

The Untold Chronicles is a monster’s coming of age story. It’s about learning to embrace the dark and make it work for you. A very cool idea that needed better execution, alas.
Posted by Ann Wilkes at 7:30 AM