Well of Sorrows, a rousing fantasy 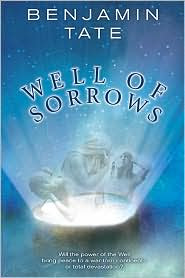 Colin Harten isn't happy in his new home of Portstown. His parents have brought him over the sea to the New World to escape an anticipated war in Andover. Some of the problems of Andover follow them. In Portstown, only those favored by the ruling Proprietor's Family are given the prime jobs and preferred homes. Colin's family is stuck in Lean-to, a rough tent-city of outcasts. Bullied to his breaking point, Colin fights back. Unfortunately his enemy is the son of the Proprietor, and Colin is harshly punished. At the same time, Lean-to's inhabitants clash with the Proprietor's forces over the discriminatory treatment. The people of Lean-to are given an ultimatum and leave Portstown to explore the dangerous interior of the continent, claiming land for the Proprietor's Family, but being given a chance to make a better life for themselves.

Bizarre storms and rumors of fierce natives don't stop the expedition from venturing up the Escarpment. It isn't long before they encounter the Alvritshai and Dwarren and discover the fate of previous expeditions. As the second section of the novel begins, Colin has changed (literally) and is far removed from the kid he once was. His journey as the protagonist of the novel takes a unique path.

Elements of the stereotypical epic fantasy novel might include a naive young hero, elves and dwarves, mysterious evil, and battles involving multiple armies. In Well of Sorrows, there are elements of all these things, but Benjamin Tate is able to arrange these components in a fresh way that makes for a rousing tale of exploration, politics, and war.

The magic that develops was surprising. Small spoiler: When Colin gains the ability to stop or slow time, this gives him power and aggravates his emotional scars. It's like an addiction in its irresistible allure and, whether he sees it coming or not, the price he pays for its use. Colin's power appears similar in nature to the evil that emerges, and I imagine that in the next volume, his internal battles will become tougher.

I'm not sure if it's really a criticism since it didn't detract from my enjoyment of this novel, but I couldn't help but draw parallels between the Alvritshai and elves, and the Dwarren and dwarves. There may be readers who have an allergy to anything remotely elvish or dwarvish. In this story's world, these non-human races have their own creative qualities that bring them to life and make them unique. One of my favorite touches was how the Dwarren ride small antelope native to the plains, rather than some fantastical beasts.

After the nail-biting opening section, in which the settlers from Portstown set off into the unknown, I felt like the pacing slowed. However, the Alvritshai and the Dwarren are introduced in greater detail, and Colin has to regain his bearings. I had already grown interested enough in Colin's predicament that this didn't keep me from reading onward.

Well of Sorrows is the first book in a planned trilogy, and I plan to read the next volume when it is available. I would recommend this book for anyone who enjoys epic fantasy where the elves get muddy and the hero struggles against both internal and external problems. There is a lot of originality here, but as the title implies, it is a dark tale, and I'm not sure how Colin will fare in the end.