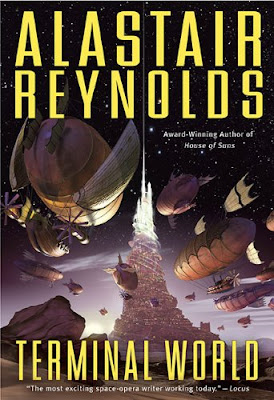 
The setting in Alastair Reynolds' Terminal World is a unique creation of far future science fiction and steampunk. The story leaps about this bizarrely awesome place, taking us from the vertical city of Spearpoint with its tiered levels, to the roving airship band Swarm and the drug-mad Skullboys. For reasons lost to history, Spearpoint is divided into fluctuating zones where different levels of technology function, all controlled by the Mire somewhere at its heart.

When a post-human angel falls from the Celestial levels, his body is brought to the local pathologist, Quillon. As the doctor examines the angel's remains, the creature awakens and warns Quillon that he is in danger. Few know that Quillon was once an angel himself, experimentally modified to survive in the lower technology of Neon Heights. He remembers little of his former life, but has managed to stay hidden among humans through repeated surgeries and anti-zonal drugs.

Quillon flees through secret tunnels, the railroad, and a steam-powered bath house. Spectral agents from the Celestial levels pursue him, and his only weapon fails as he crosses into more primitive zones. Guided by Meroka, a heavily-armed and foul-tempered woman, Quillon leaves Spearpoint for the unknown.

Quillon and Meroka struggle to escape a gang of Skullboys and the carnivorgs that feed on human brain matter. When the doctor finds a woman and her child left trapped in a cage, he insists on freeing them, even though the woman is marked as a witch. As Quillon is dragged further from everything he has known, a massive zone shift occurs that devastates Spearpoint.

The plot speeds on, with barely a slow moment. Quillon must solve the challenges of the zone shift and investigate the nature of the tectomancers, while dodging suspicion, betrayal, and hiding his own nature.

While this novel is not set in the Victorian period, there are definite steampunk elements. Much of the action takes place on airships, complete with goggles and clockwork gadgets. One important character in the level of Steamville is a patched-up android powered by a calliope. Yet, there are hints of a lost technology and space-faring civilization here as well. I was intrigued by Quillon's world, but at the conclusion felt a little disappointed that I didn't have all the answers I wanted.

Overall, this was one of the most intriguing and entertaining novels I've read this year. I loved the colorful characters and their interactions, and the plot was twisty and inventive. If Mr. Reynolds decides to write another book set in this world, I would pick it up right away.
Posted by Ann Wilkes at 12:17 PM

I remember this book as a good read. I especially liked the "fish out of water" aspect of the main characters. Any more comment would be a big spoiler.