To Nisi Shawl they sing: Nisi Is Our Queen! 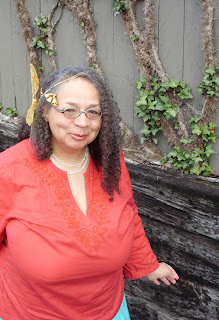 Nisi Shawl is a much-loved, award-winning writer and inspiration to so many. She is also the co-founder of the Carl Brandon Society whose mission is to "increase racial and ethnic diversity in the production of and audience for speculative fiction." Please do read her beautifully crafted autobiography. I can't begin to do it justice.

This had to be one of the most enjoyable interviews I've conducted. I requested an interview after hearing she was asked to be Guest of Honor at WisCon last year (2010). It's been a long time coming, but you'll find it was worth the wait. I interviewed Nisi on Friday, September 23rd. She'd been cooking bangers and mash for a book group later that night. The book in question was English, thus the bangers and mash.

AW: What do you do when you're not cooking, reading or writing?

NS: Sleep? Take walks. Bird watch on same. Sing. That's about it. I lead a very circumscribed life. I do seem to travel a lot. I also teach a bunch of 5th and 6th graders for a week every spring as part of Centrum's Young Artists Program. It is the most fun! Kids catch on so fast.

AW: So how was your GOH stint at Wiscon last year?

NS: It was amazing! People kept coming up to me and giving me pies, clothing, jewelry, food, flowers. They kept prostrating themselves at my feet. They made up a song about me and sang it whenever I came around. The first time people sang to me was after my reading. That was pretty intense, with the clapping and dancing.

I hope I gave as good as I got. My mom, my youngest sister, two nieces, and a nephew also attended. It was fabulous.

A little investigation about that song revealed that the music was written by S. J. Tucker. The lyrics were written by K Tempest Bradford, Nivair H. Gabriel and Amal El-Mohtar. And here it is:

NISI IS OUR QUEEEN

VERSE 1
Nisi wears a crystal crown;
She never, ever makes us frown.
That's why POC all sing:
Nisi is our queen!

VERSE 2
Nisi can write anything;
And never, ever phone it in;
That's why WisConites all sing:
Nisi is our queen!


AW: Can you elaborate on the prostrations and pies?

NS: The prostration was people lying on the floor in front of me like a traditional African salute to rulers. It's traditional African as in, it actually has crossover with my religion. In my tradition it is called a "kunle" ("KOON-lay"). We do it in front of priests. It has meaning in other parts of the world, too. Near Eastern, European, Far Eastern rulers all had this salute given them, at various historic times.

Most notably on this occasion I was "kunled" by Ama Patterson and Andrea Hairston. (Andrea is one of WisCon's 2012 GOHs.) I had to lift those women up from the floor. Royalty is a mutual thing.

AW: May I ask what religion?

AW: And the pies?

NS: I think I exaggerated, and there was only one--a rhubarb pie from Kathi Nash. It magically appeared on my dresser. The pie was very, very, very good.

Another high point was giving my speech and having people stand up to applaud. I sang during my speech.

And looking out in the audience and seeing my family.

AW: I wish I could have been one of them. I would have hollered too. What did you sing?

NS: I believe there's a video of it. I sang two Michael Jackson songs: "I Wanna Be Where You Are," and "Never Can Say Goodbye."

AW: Do you have to write to pay the bills?

NS: Oh, yes, I do have to write to pay the bills, and worry is part of that gig, it seems.

AW: If all things (meaning pay) were equal, which would you rather write? Poetry, short stories, or novels?

NS: They don't have so much to do with each other that one is a choice over the other. I think there are novel times in my life, and short story times, and poetry times. I used to not want to write novels because I couldn't maintain the same interface with the world for the length of time writing at that length would take. At 55, nearly 56, that is no longer a problem. I think I am naturally at a novel stage in my life. But I have yet to sell one of the three novels I've actually completed, let alone the one currently in progress. On the other hand, I have sold what, four stories this year? No, make that six. Three coming out this fall. What I'm trying to say is, "All of the above."

AW: What's coming out in the Fall?

NS: October 1, a short story called "Just Between Us" in a new magazine edited by Leslie What called Phantom Drift. I had despaired of ever publishing this one, though it's dear to my heart. It's really weird. The end of October, "The Return of Cherie," an excerpt from my Belgian Congo steampunk novel-in-progress, comes out in the second lesbian steampunk anthology, Steam-Powered 2. In November, "Beyond the Lighthouse" will appear in the River anthology edited by Alma Alexander. I wrote it in like nine days, and I'm really proud of it.

AW: Is Phantom Drift a print or ezine?

NS: Print. Hard to believe, isn't it, in this day and age? The cover and subscription info can be found here.

AW: Tell me a little bit about the steampunk novel you're writing now.

NS: I got into writing it by saying I would two years ago when on a panel at World Fantasy. I would love to just concentrate on doing it. Anyone wants to buy a chapter for a $100, I will kick one out for you. Don't want to say too much, but I have the characters, outline, conceit, and the first five chapters done, in addition to the excerpt appearing as "The Return of Cherie." It's a sort of alt history, with protagonists modeled after Josephine Baker, Colette, E. Nesbit, H.G. Wells and numerous others, including some indigenous Kongolese figures. And some Macao Chinese, too! It is so much fun when I get to work on it.

AW: I know what you mean. It's the starting that's hard. And the stopping.

That is so cool. I love African traditions so I find this fascinating.