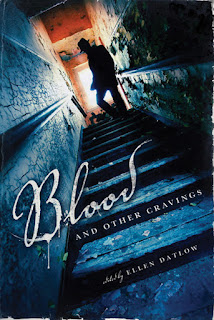 Blood and Other Cravings
Edited by Ellen Datlow
TOR 2011

I’m a fan of fantasy of all flavors, light and dark, but horror?  Not so much. Still, Blood and Other Cravings was rarely dull, and held a number of stories that I enjoyed.

The book starts with a breath of hope, the tale of a man who, despite all likelihood, survives a mining disaster.  He’s sure he will savor every moment of the rest of his life, and indeed, that’s how it starts.  But then he’s visited by a hungry stranger and a story that could have been uplifting turns dark.

My favorite story here is "First Breath" by Nicole J. LeBoeuf.  A teenager seeking herself, a chance encounter in a bar, a first kiss.  It is a very normal story which gracefully and inevitably turns strange and creepy.  It probably says something about me that I found the end more poignant than dreadful.

"Mrs. Jones" by Carol Emshwiller is another twisted love story.  We start with the sad tale of two spinster sisters who live together without sharing anything of significance, except a certain poverty of character. When strange noises hint that something might change, the two sisters each rise to the challenge as they perceive it; one wins the prize, if prize it is, but that’s just the beginning.

"The Third Always Beside You" by John Langan is another story of love gone wrong, of a family in the wake of an infidelity where the presence of the “third” lover colors every moment of their family’s life, becoming an obsession of the children that lasts into their adulthood, even though (as with most obsessions in horror collections) they would doubtless have been happier if they could have let it go and  focused on their own lives.

"Mulberry Boys" is creepy and disturbing and all too memorable.  I could say more, but I’d really rather not revisit that story in my mind.
Blood and Other Cravings ends with "The Siphon" by Laird Barron.  It starts much like standard horror fare, a routine trip that turns strange and deadly, but the author has a sure touch and the story is beautifully written.  It offers more than despair and gore, though there is plenty of that too.

Overall, I was very impressed with this anthology, even though, as a general rule, I prefer happy endings. Whether you’re a die-hard horror fan or just dabble in the genre from time to time, I think you’ll enjoy this this horror anthology.