The Amazing Spider-Man
Released July 3, 2012  (USA)
Review by Karina Fabian
My family loves superhero movies.  We saw Avengers on opening day and some of us have gone back to see it again and again.  Captain America and Iron Man get replayed on DVD, and Liam just got IronMan socks for his birthday.  Batman, unfortunately, has gotten too dark, but we enjoyed the movies for awhile.
When it comes to Spiderman, though, the reigning opinion has been “Maybe on Netflix.”  However, when the latest version, starring Andrew Garfield as Spiderman, and with Gwen Stacey (Emma Stone) as his love interest instead of Mary Jane, came out, we decided to give it a chance.  Frankly, the trailer where Spidey takes on the carjacker had sold us—here at last was a Spiderman who had some fun!

Knowing that they were probably rebooting in order to introduce him to the Avengers later in the series, we went in with high hopes—and weren’t disappointed.
SPOILER ALERT, though I’ll try to be vague.
The thing we loved most about this version was its believable, three-dimensionality of characters.  Peter was not just a whiny nerd-genius stereotype sating his guilt by avenging the death of his Uncle Ben.  Instead, he was a shy, socially awkward, smart kid.  As Amber put it, “I know these kind of guys!”  The scene when he has dinner with Gwen’s family and gets into an argument about Spiderman with her Police Chief father is very well done—especially in the way what Capt Stacy says effects his character growth later on.  The other great thing (as seen by my kids even more than me) is how the mask gave him confidence.  You could even hear it in his voice—he was louder, deeper and surer of his words.  He became the smart-alecking Spiderman we know and love in the comic books.
(There was one faux pas in the character development, however.  I have been informed by my teenage daughter that no “sciencey geek” of her generation would use Bing.  Product placement fail?) 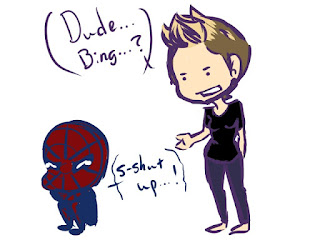 Uncle Ben and Aunt May had a wonderful relationship—and not just the two-dimensional “Love you always.”  I think my favorite couple’s line is when May grumbles, “Why didn’t you tell me you didn’t like my meatloaf?  Thirty-seven years of marriage!  How many meatloaves did I make you?”  The best part is how she’s walking away when she says the last—just a very natural exasperation.    Uncle Ben is much more believable—he gets frustrated, tries to keep his temper, and the scene where he is killed exemplifies who he was as a man—someone trying to do right rather than a random victim.
Gwen works better than MJ as a girlfriend, I think.  It was nice to see a heroine comfortable in her home, supporting her boyfriend, showing some spunk—and not clueless!  Thank you for a girlfriend who wasn’t clueless!
My favorite side character is Flash--the jock bully who becomes a Spidey fanboy.  From the beginning, he is not seen as a cardboard cutout, and the scene when he tried to express his sympathy to Peter after Uncle Ben dies was one of the most real of the movie.
Dr. Curt Connors, who became the Lizard, was not money-hungry, fame-mongering—or even desperate to use the formula for his own benefit.  He’s actually a scientist who tries to stay ethical until the genetic soup drives him insane.  The thing about Spiderman I like is that you have ordinary people pushed into extraordinary situations, and this movie stays true to that.
The plot is your typical Genesis-of-Spiderman plot: nerdy boy gets spider bite; uncle delivers the “responsibility” speech then dies because nerdy boy doesn’t listen; nerdy boy dons suit to fight crime while supervillian discovers the key to his powers; big fight scene where nerdy boy proves his stuff and truly becomes Spiderman.  Having Gwen (who was his original girlfriend) mixes things up, but what really made this movie enjoyable is that all the elements play more naturally and believably—and as a result, you get caught up in the story rather than the action.
Overall four stars of five.  This is what the Spiderman movie should have been to begin with.
Posted by Ann Wilkes at 1:45 PM

Sweet review. Everybody is saying this one is more faithful than the last three films. I remember at the time people were upset about it, but the fan boys got drowned out by the average movie goer.