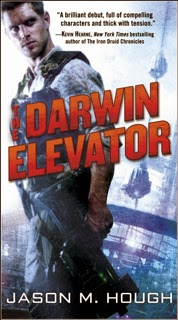 In this debut novel by Jason M. Hough, humanity has fallen on hard times after the mysterious arrival of an alien space elevator in Darwin, Australia. While first heralded as a promising technology, the elevator's appearance is followed by a plague which turns the majority of those affected into feral sub-humans, if it doesn't kill them outright. Only the protective Aura encircling the elevator can prevent the disease from infecting and transforming the population.

The underlying cause of the disease is unknown, but a few rare souls are immune to its effects. By the time the novel opens, nearly all of humanity has either died from the plague, been converted to a sub-human, or found refuge in the disease-free ring of land and space encompassed by the elevator's Aura.

Skyler Luiken is one of those fortunate immunes, and since he can travel outside the Aura without a sealed suit, he makes his living as a scavenger of earth's former civilizations, recovering items requested by those restricted to Darwin. His small team runs into trouble when the elevator loses power at the same time that Skyler's ship crosses the Aura on their return from a routine mission. His ship is subjected to a search and his crew draws the suspicion of Russell Blackfield, prefect of Nightcliff, a fortress built to guard the base of the alien elevator.

Humans also live on a series of orbital habitats, tethered along the elevator. They grow food for all mankind, while Nightcliff fortress oversees the exchange of this food for air and water from below. One of the Orbitals, scientist Dr. Tania Sharma, has developed a theory that the alien Builders are set to return in the very near future. Together with Neil Platz, the entrepreneur who built many of the human additions along the elevator, Tania launches a secret investigation into the aliens' imminent return.

Tania's research leads her to recruit Skyler to retrieve data from abandoned astronomical facilities. In the course of his missions, Skyler draws more scrutiny upon himself and his crew from the overbearing Russell Blackfield. Tension builds as repeated malfunctions in the elevator and political wrangling both threaten the fragile economy of Darwin. At the same time, the sub-humans are becoming more aggressive and dangerous to those outside the Aura, or even on its periphery.

The world that Hough has built in this book was very easy to visualize, and the plot kept me guessing with abundant tension and action that never became exhausting. After a few unforeseen surprises in the plot, I was truly enjoying myself. The vivid characters presented a realistic mix of cultural backgrounds, with both male and female personalities shining in their roles. For me, Russell Blackfield's actions became a bit over-the-top as the novel progressed, but it did not detract from the rest of the story.

The Darwin Elevator shows marvelous skill for a new author and was one of the best books that I've read all year. It is the first volume in The Dire Earth Cycle, but fortunately you don't have to wait for the next book - the remaining two volumes have already been released. I have the second book, The Exodus Towers, in my hands already.
Posted by Ann Wilkes at 10:44 AM